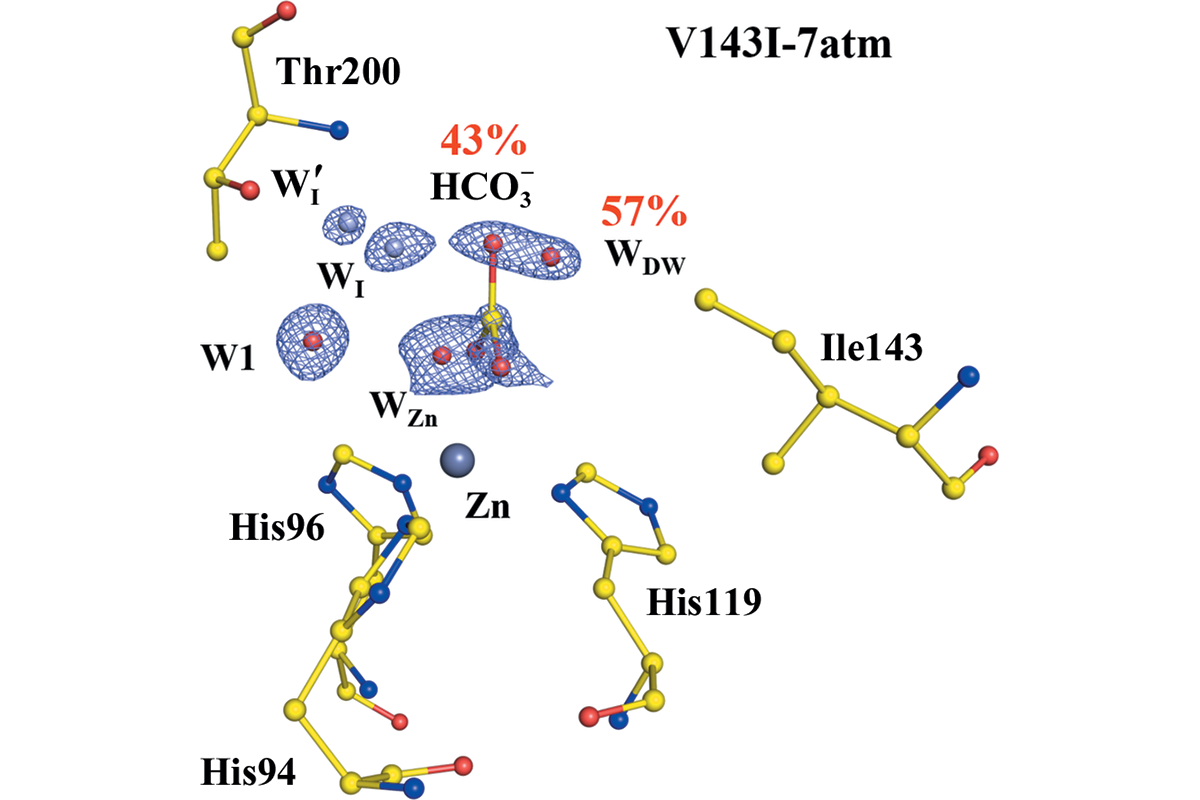 Carbonic anhydrase (CA) is one of the most studied proteins in molecular life sciences. It has been especially widely used as a biophysical model for protein stability and binding studies (Krishnamurthy et al., 2008). CA is also one of the fastest known enzymes that catalyze the reversible hydration of carbon dioxide to bicarbonate anion and acid protons. Humans contain 15 highly homologous CA isoforms. Three of them do not perform the catalytic function of CA owing to the absence of Zn(II) in the active center as at least one of the three His residues holding the metal cation has changed to another amino acid. The remaining 12 isoforms have variable expression in tissues: some of them are localized intracellularly in the cytosol or mitochondria, whereas others are located outside of and attached to the cell membrane via a lipid anchor or a transmembrane helix. Several of these isoforms have been implicated and are over-expressed in numerous cancers. Thus research in the CA field is quite active and has a significant impact on all sectors of protein science (Dodgson et al., 1991; Chegwidden et al., 2000; Frost & McKenna, 2014; Supuran & Simone, 2015; Matulis, 2019).

Since the discovery of sulfanilamide and acetazolamide in the 1940s, it has been established that primary sulfonamides are highly specific binders and inhibitors of CAs. Numerous sulfonamides bearing thia­zide, furosemide and other moieties have become clinical drugs used to treat hypertension and edema, as well as being used as diuretics. Dorzolamide and brinzolamide have been used as antiglaucoma agents. However, there is also a discussion on the applicability of some recently designed CA inhibitors (Jonsson & Liljas, 2020).

Since the first X-ray crystal structure of a CA (Liljas et al., 1972), the atomic structures of ten human CA isoforms have been determined. The missing structures are isoforms expressed in mitochondria, CA VA and CA VB. However, isoform CA II is by far the most abundant in the Protein Data Bank (Linkuvienė et al., 2018). Most efforts to crystallize CA isoforms have been in the field of drug design for understanding how low-molecular-weight compounds recognize and distinguish CA isoforms. A good drug is supposed to selectively inhibit only one CA isoform, the target of a disease.

Despite these numerous studies, a truly detailed atomic level understanding of CA enzymatic activity, interaction of the enzyme with its substrate CO2 and especially the behavior of water molecules are not fully understood. The situation is further complicated by the substrate being gaseous, making the methodology more complex.

Writing in the November 2020 issue of IUCrJ, Kim et al. (2020) advance our understanding of the catalytic mechanism of CA II by producing a mutation and comparing it with the native protein. The mutation (V143I) has previously been introduced (Fierke et al., 1991; West et al., 2012). The change of valine to isoleucine is one of the smallest possible perturbations of a protein structure (where one hydro­phobic amino acid is changed to another hydro­phobic amino acid that differs by a single CH2 group) that can be introduced into a protein with the hope that such a change would cause almost no deviation in the catalytic properties of the enzyme.

The mutation actually changed the catalytic properties of the enzyme quite substantially. The kcat value was not significantly affected, but the affinity of the substrate CO2 for CA II decreased tenfold, from 10 mM Km for CA II to 100 mM Km in the mutant. The study by Kim et al. (2020) demonstrates the structural arrangement of the CO2 in the active site and shows its diminished mobility in the mutant as a result of the decrease of available space in the substrate binding pocket.

As in a previous study where pressurized CO2 was applied (Kim et al., 2016), this study determined the crystal structures not only at ambient pressure in air, but also at 7, 13 and 15 atm pressure of CO2 gas (the 7 atm binding site is illustrated in Fig. 1). The concentration of CO2 in the experiment increased from approximately 300 ppm in ambient air to more than 10 atm in the pressurized setting. Thus, the increase was approximately 30-thousand-fold, enabling visualization of the CO2 molecule bound in the active site of the protein. The mutation caused a shift of its position and partial conversion to an HCO3– bicarbonate anion.

Furthermore, the study demonstrated that the proton transfer pathway around His64 has been largely unaffected, but there were subtle changes in the structure of the entrance conduit (EC) water molecules. It would be very interesting to see the positions of each proton in the conduit, but this would require neutron crystallography (Fisher et al., 2012). Still, this remarkable study shows the effect of a mutation on the structure of the catalytic mechanism of CA II in the greatest detail so far and will be used in the design of compounds for pharmaceutical purposes.