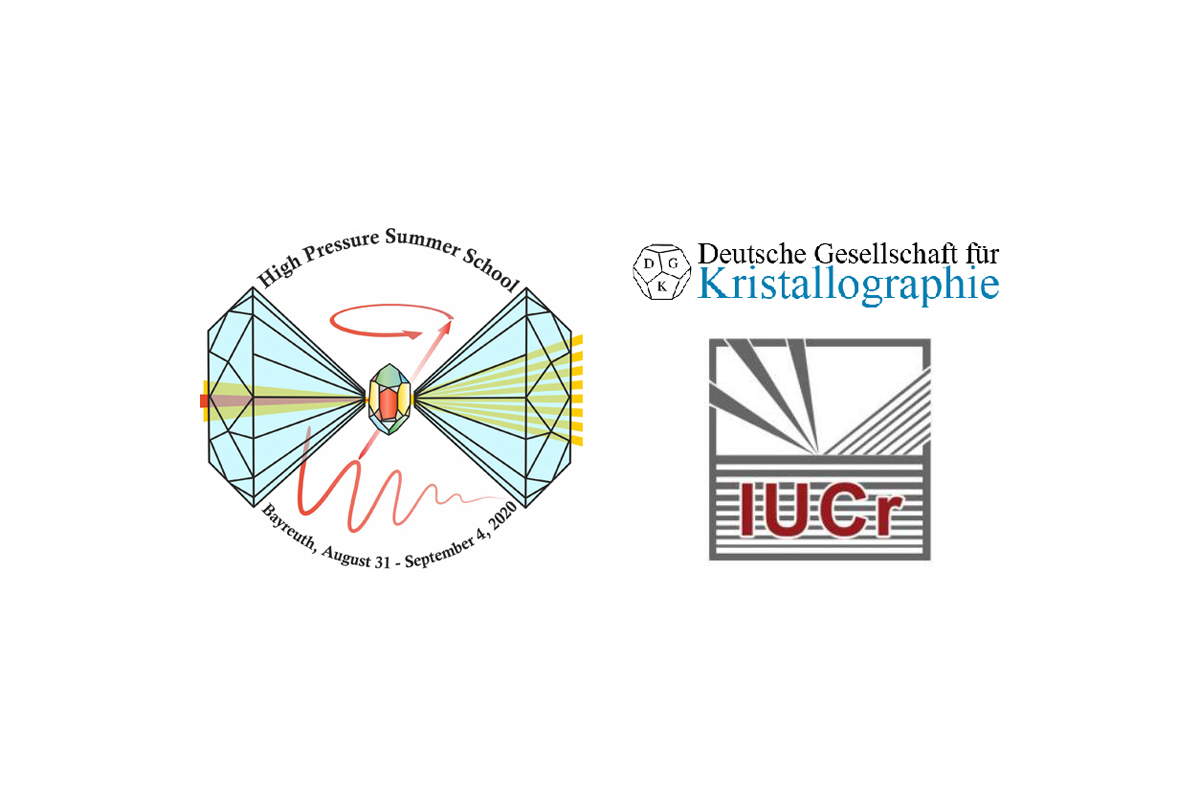 The International Summer School on Novel Methods of Atomic and Electronic Structure Studies at High Pressures was held in Bayreuth, Germany, from 31 August to 4 September 2020 (https://www.dubrovinskaia.uni-bayreuth.de/en/High-Pressure-Summer-School-2020/index.html). It was approved by the IUCr (through the IUCr Commission on High Pressure, CHP) and by the German Society for Crystallography (DGK). We expected to host our students from all over the world at the University of Bayreuth. However, the COVID-19 pandemic prevented the participants from gathering in the heart of Bavaria, but they enthusiastically supported the idea put forward by the organizers to attend via Zoom. The School was a great success, and we truly believe that it will become an annual event. 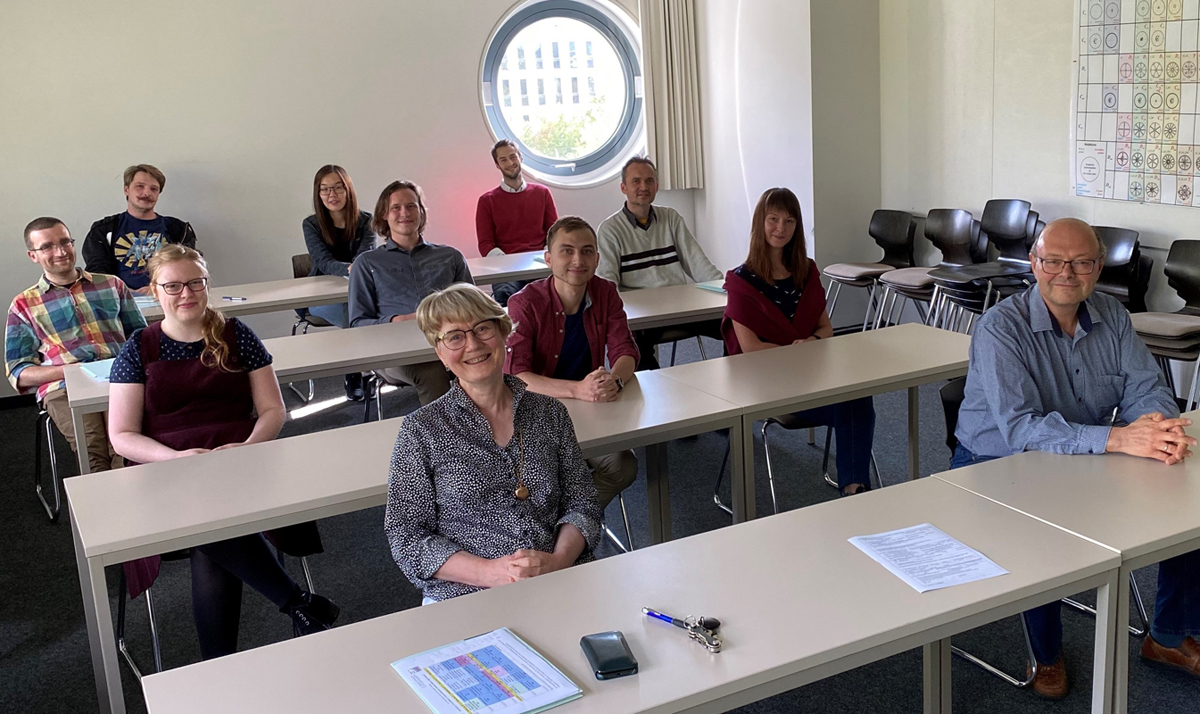 Bayreuth Team of lecturers and students (from the left to the right and from the last row to the front row): Timofey Fedotenko, Saiana Khandarkhaeva, Dominique Laniel, Thomas Meier, Kirill Vlasov, Sergey Ovsyannikov, Alena Krupp, Andrey Aslandukov, Alena Aslandukova, Natalia Dubrovinskaia, and Leonid Dubrovinsky (Achim Schaller is not in the photo).

The idea of the School emerged from a wish to share the experience collected within the Dubrovinsky-Dubrovinskaia group (https://www.dubrovinskaia.uni-bayreuth.de), whose research during the last decade has been mainly focused on the development of high-pressure single-crystal X-ray diffraction (sc-XRD) and nuclear magnetic resonance (NMR) in a diamond anvil cell (DAC). Our efforts enabled sc-XRD and NMR experiments at simultaneous high pressures of over 180 GPa and temperatures of several thousand degrees. This has led to remarkable findings in solid-state physics, chemistry and materials science at extreme conditions.

The School, whose organization was pushed by Dominique Laniel and Thomas Meier, aimed to provide an introduction to novel methods of atomic and electronic structure studies at high pressures in a DAC to early-career stage scientists (Masters and PhD students, post-docs), as well as scientists working in the field of high-pressure research. The focus was set on the new developments pioneered in high-pressure sc-XRD and NMR.

An overview of the necessary fundamental theoretical and methodological principles, including DAC preparation and strategy of experiments, was covered through lectures accompanied by multiple demonstrations, hands-on sessions and step-by-step tutorials. At the end of the School, participants were expected to be able to perform basic high-pressure sc-XRD and NMR experiments, as well as data processing and interpretation. 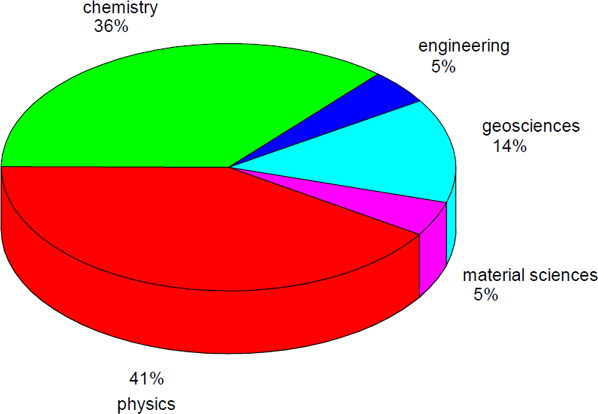 The academic background of the participants.

The School was attended online by 25 participants from 7 countries: Germany (8), India (6), France (3), China (3), Italy (2), UK (2), and Slovenia (1). Among them were 11 PhD students, seven post-docs, 2 Masters students, and 5 staff scientists. They were taught by 12 lecturers and instructors, ten of whom are either present or former members of our Bayreuth group.

The curriculum of the School comprised 30 teaching hours (6 hours per day) distributed as follows: The sc-XRD part of 23 hours included crystallography lectures (10 hours), covering topics ranging from the basics of crystallography and X-ray diffraction to advanced themes on data handling and software, lectures on the technical aspects of working with DACs, including a historical insight (3 hours), and lectures on synchrotron setups (2 hours); 2 hours were dedicated to application cases aimed at giving an insight into a wide range of scientific problems in physics, chemistry and materials sciences, which could be addressed using the methods taught at the School. The sc-XRD hands-on sessions included 6 hours of exercises (6 different hands-on sessions were led by four instructors for 4 groups of students in parallel). The NMR part of 7 hours included NMR lectures (4 hours) and hands-on sessions (3 hours) for three groups at different times.

Undoubtedly, a School via Zoom differs a lot from an on-site workshop. As pointed out by many lecturers, the absence of immediate audience feedback, especially during the 'teaching' lectures, created an essential difficulty. Interestingly, the majority of lecturers attended the lectures of the other lecturers as well. For those who joined us online from the east coast of the USA, the School started in the middle of the night (at 2:30 a.m.) but, as one of the participants wrote, they 'enjoyed the School very much despite the time-zone differences with Germany.'

Taking into account the large variety of backgrounds and prior knowledge of the participants, the programme of the School was very diverse. The lectures spanned topics from the basics of symmetry and NMR to very complex material for advanced crystallographers and interesting cases encountered in real experiments. The majority of the participants evaluated this broadness very positively: on the one hand, everyone could follow the material corresponding to their own knowledge, and hence could improve it. On the other hand, one could see the material beyond one's own level and consider it as the next goal for studying.

We do believe that our experience would be useful for other colleagues who intend to run online schools and workshops in the future. We have summarized a few technical recommendations which could make online events even more efficient:

- It would be very helpful if the participants could download all materials and software at least one week before the course starts with no rush or stress;

- During the week prior to the course, we would suggest organizing one or two online sessions for testing the software: it would help to eliminate possible problems in advance and save valuable time at the beginning of the course;

- It should be specified in advance that the use of a large monitor or two separate monitors during hands-on sessions is an important technical prerequisite in order to realize the practical exercises efficiently. As several programs have to run in parallel and one has to quickly switch back and forth between the shared screen of the instructor and one's own running programs, just a single small monitor is insufficient.

- Time should be more generously allocated for the hands-on sessions; a common suggestion for our sc-XRD part was to increase it by a factor of 1.5, i.e. to plan 9 hours of hands-on instead of 6. This means that almost 40% of the teaching time should be allocated for hands-on.

- One should take care of the breaks between the lectures. According to the participants, a reasonable time (up to 15 min) for breaks would allow one to think about the lecture that had just finished and to get prepared for the following one.

Student's feedback: 'All speakers did their talks in a 'not boring way', for that I would like to say special thanks to them.' 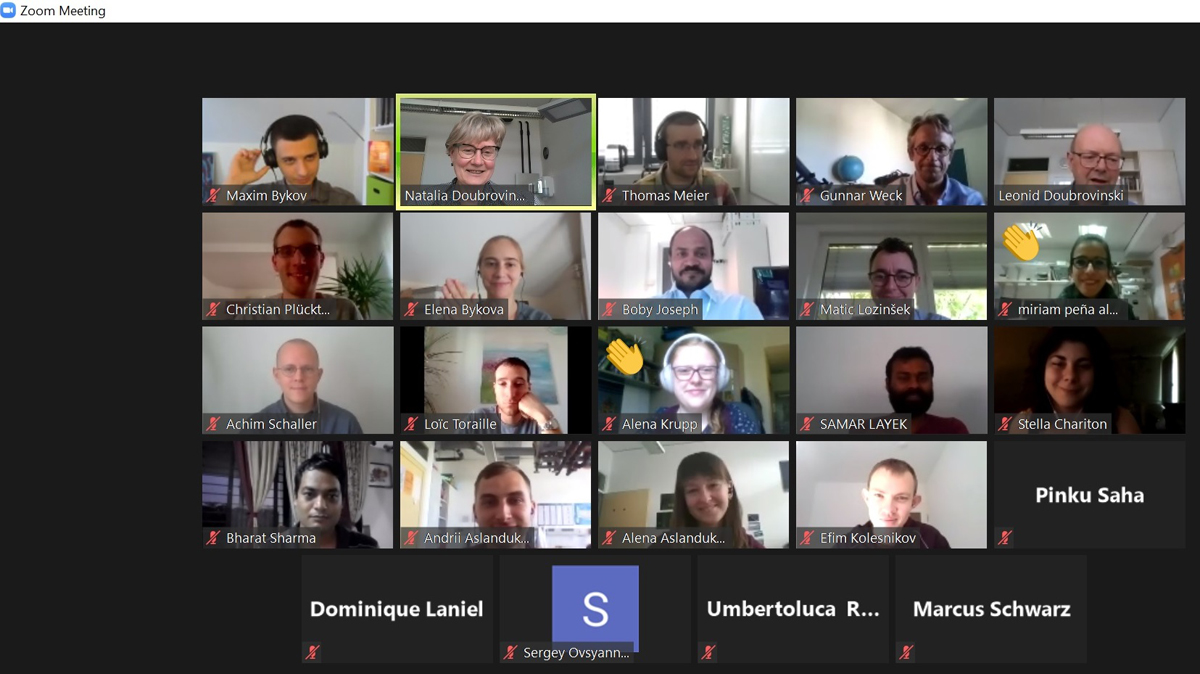