As I write this, the news of the COVID-19 pandemic is finally starting to lighten, with the development of new vaccines that seem to be highly effective. So far, two in Russia have been approved, but without the usual Phase 3 trials needed for international use. Two others (Pfizer and Moderna) seem to have something like a 90–95% efficacy. There are many more in various stages of development and testing. The remarkable speed with which this has happened is a real triumph of science, in which crystallography has played a significant role. Here at Oxford University, working with AstraZeneca, a third vaccine is showing promise. So, with a bit of luck, within the next few months, we shall be able to resume some normal life. It has been a long haul, hasn’t it? But we are not finished yet. I do seem to remember that I used to have an office back in the lab; I look forward to some time soon being able to get back to the lab and meet face to face (rather than Zoom) with my colleagues over morning coffee. And as I write, the UK has approved the Pfizer vaccine!

Recently, the Gregori-Aminoff Prize for 2021 was awarded to Henry Chapman (University of Hamburg, Germany), Janos Hajdu (Uppsala University, Sweden) and John Spence (Arizona State University, Tempe, AZ, USA). I am pleased that John Spence agreed to write a special article for us in this issue of the IUCr Newsletter about serial crystallography at X-ray free-electron lasers and synchrotrons. The enormous speed with which vast amounts of data can be collected using modern techniques like this is just breathtaking, especially for someone like me, who grew up taking X-ray crystallographic data using the old-fashioned film cameras. Today, X-ray data can be collected in seconds, where it used to take several weeks. Crystallographers of today have it much easier!

When I first began research in crystallography, we were all told that crystals were defined in terms of periodic arrangements of molecules and atoms, maybe with a little disorder thrown in to make them more real. However, nature has a habit, now and then, of throwing a curveball, with the historic discovery of quasicrystals by Dan Shechtman in 1984. Years before, crystallographers like Alan Mackay at Birkbeck College London already had the foresight to question the doctrine of strict periodicity. In this issue, István and Balazs Hargittai tell us about Alan Mackay and the latest Nobel Laureate, Roger Penrose. Intriguingly, the story involves a legal dispute over the Penrose pattern and … wait for it ... toilet paper! Read about it here.

The Seventh Crystal Structure Prediction (CSP) Blind Test has been announced. The ability to predict a crystal structure, especially one containing organic molecules, is of great importance to the pharmaceutical industries in their bid to design new drugs. Most new pharmaceutical compounds are patented using crystallographic data, and one of the areas of interest is polymorphism, where a molecule can form crystals with different structures. Each polymorph may have different properties, such as solubility differences that affect the drug uptake, and can be patented separately. The Cambridge Crystallographic Data Centre invites applications to participate.

Clearly, structure prediction is gaining in importance. By coincidence, just the other day, another type of structure prediction has hit the news. This is the announcement that has excited the media headlines from the recent Critical Assessment of Protein Structure Prediction (CASP) experiments. These have shown that it is possible, with apparently staggering success, to start with an amino acid sequence and predict the way it folds up into a protein molecule. For crystallographers, this raises a question. Do we still need to do diffraction measurements in structural biology? John Helliwell discusses this important topic in this issue of the Newsletter.

One of the most disagreeable aspects of getting older is that you hear ever more often of the passing of old friends. So, it was with regret that I heard about the recent death, after a long illness, of Sir John Meurig Thomas. We both go back a long way, having first encountered each other when he sent in a manuscript for publication, and I was asked by the journal editor of the time to be a reviewer. It turned out, by chance, that I happened to be the only other person in the UK who had inside knowledge about the topic. I won’t bore you with the details, but suffice it to say that we got into a friendly discussion on the subject of his paper, which then led to a long-lasting friendship. John was a superb scientist, working both in the fields of crystallography and materials science. He was also an excellent speaker and science presenter. In 1987, when he was Director of the famous Royal Institution in London, he gave that year’s Christmas Lectures on Crystals and Lasers. I recommend that you watch these yourself here. I was lucky enough to be in the audience during his first lecture.

But it doesn’t stop there. I have just heard that another old friend, Patience Thomson, has also passed on this week. Patience was the younger daughter of W. L. Bragg and granddaughter of W. H. Bragg. I got to know her when we were planning the Two Braggs Exhibition at the University of Warwick in 2013 (and see https://www.diamond.ac.uk/Home/News/LatestNews/02-09-14.html). Some years earlier, I was invited to give a lecture on the Braggs, and I was able to meet up with Lady Margaret Heath, Patience’s elder sister. She very kindly (and I thought rashly) let me take home the Bragg family photograph album (now in the archives of the Royal Institution). Margaret then introduced me to Patience. She, and other members of the Bragg family, joined in the planning, giving access to their homes and material, much of which has never been published. Patience was such a lovely person and was well known to the crystallography community. I used to enjoy visiting her at her home south of Oxford and seeing all the great paintings and drawings made by her father and grandfather, and chatting about all the famous people she had met. That resulted in a joint book on the autobiographies of Sir Lawrence and Lady Bragg. Patience was married to David, son of G. P. Thomson and grandson of J. J. Thomson (that’s four Nobel Prize winners!) – quite a record. 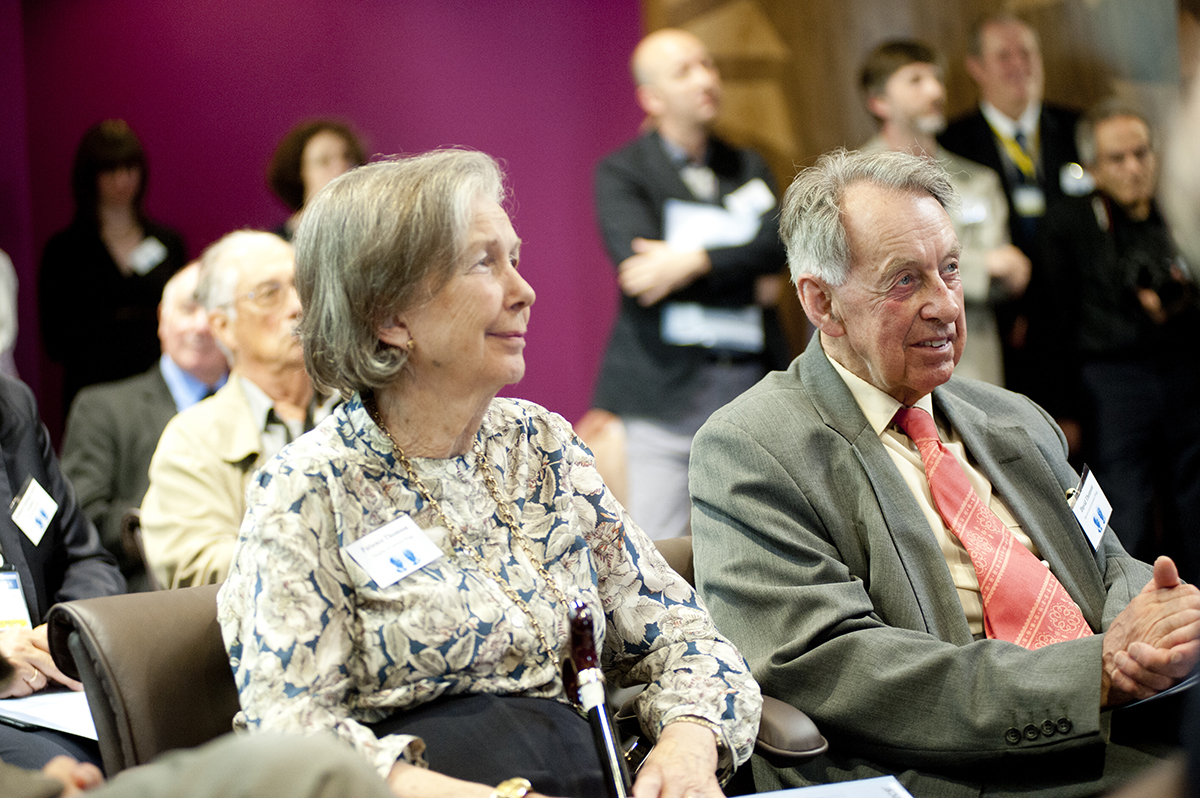 Patience and David Thomson at the Two Braggs Exhibition in 2013.

Have you seen the stunning new website for the IUCr? If you have not done so already, do have a look. I should also like to mention that the early back issues of the Newsletter are now online and available here.

In the meantime, I hope you will stay safe and wish you well for the New Year.