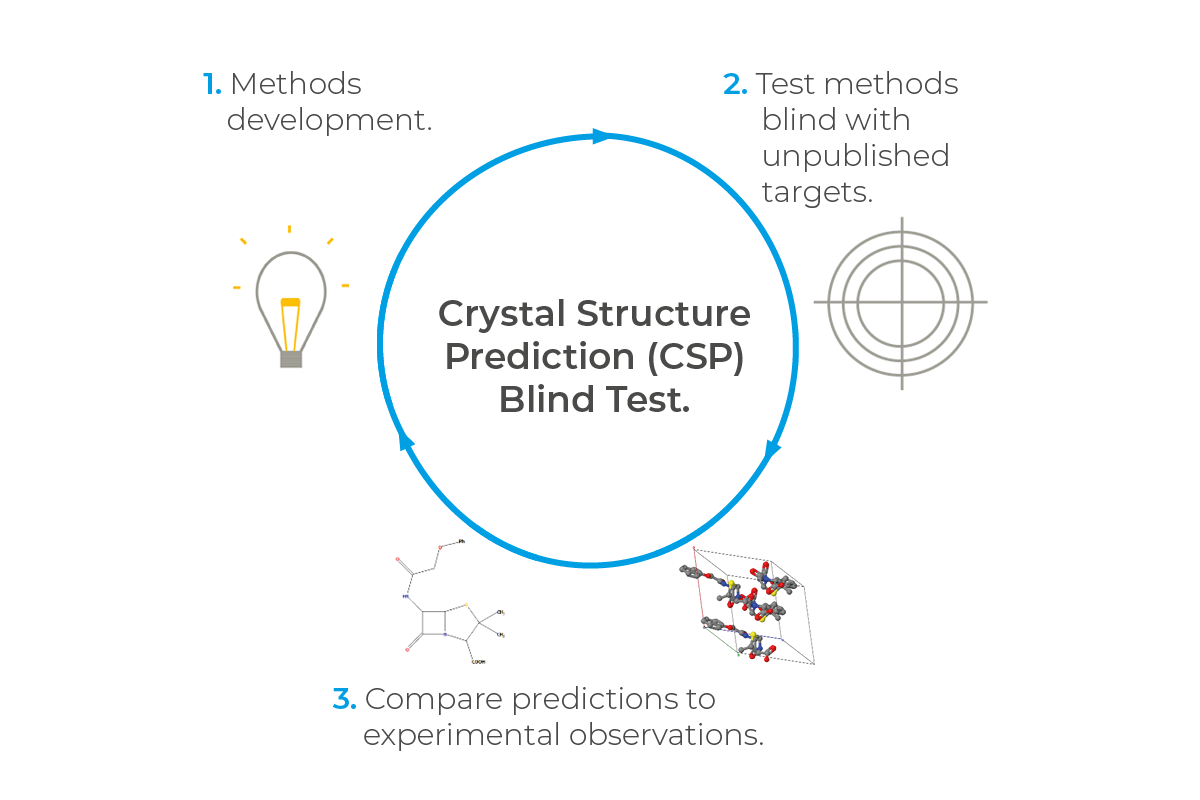 How the CSP Blind Test initiative works to help develop computational techniques to predict crystal structures. This field has the potential to revolutionise drug and agrochemical design and development methods.

The Seventh Crystal Structure Prediction (CSP) Blind Test – a major challenge in computational chemistry – began at the end of October 2020. It will see the world-leading methods in CSP put to the test on real targets – with a high bar set by previous work. The seven test systems have been sourced from leading experimentalists in industry and academia for prediction.

The importance of CSP

The 3D structure and packing of crystalline materials have a big impact on their properties – this is most relevant in drug discovery and development.

Small-molecule drugs are usually administered in crystalline, solid form. This form undergoes extensive testing to ensure it is stable, effective and safe. However, it is possible for a small molecule to have multiple crystal forms – polymorphs – where the molecular structure is the same, but the packing is different. This phenomenon is widely observed – for example cocoa butter has six polymorphs, resulting in different melting temperatures that impact the texture of chocolate.

Predicting how and when an alternative polymorph will form is not simple. In the context of medicines, the impact can be huge – with different polymorphs being unstable in storage, ineffective or at worst unsafe. Ritonavir, an antiretroviral drug for HIV/AIDS, had to be pulled from the market in 1998 when a second polymorph suddenly appeared that was less soluble and hence less effective (Bauer et al., 2001).

The ability to predict in silico if another polymorph is possible and probable, would allow pharmaceutical companies to identify such risks earlier.

CSP is already a key part of most pharma companies’ discovery and development process, but the science is still developing, with initiatives like the CSP Blind Test playing a key role.

How does the CSP Blind Test work?

The Cambridge Crystallographic Data Centre (CCDC) has administered and run the CSP Blind Test since the first iteration in 1999. The team selects a set of solved but unpublished structures to use as the test targets. The 2D structures are provided to participants, who have around one year to predict the 3D structure and crystalline properties using their best methods. Once predictions are in, the solved structures are revealed and comparing the two allows further method refinement and learnings.

Leading scientists enter the test from academia and industry, to see how their novel methods perform. The results of each test are published in the literature, with great leaps of progress seen every time.

"The CSP Blind Test is a fantastic example of how scientific methods can be advanced through careful and organised initiatives," said Anthony Nicholls, President and CEO of OpenEye Scientific Software. "The very principle of blind testing is at the core of the scientific method, and the CCDC acting as facilitators allows CSP methods to be put to the test in a realistic way that helps them to be progressed and improved upon."

How does CSP compare to other blind challenges?

Blind tests in evaluation of software methods have a long and illustrious history. Along with historical CSP challenges, various groups have held other blind challenges such as protein folding, docking challenges and property prediction challenges.

Protein folding has risen through computational chemistry circles into the popular science spotlight, with tech companies like Google's DeepMind entering the Critical Assessment of protein Structure Prediction (CASP) challenge (see John Helliwell's article in this issue), and games like FoldIt raising awareness more broadly. But CSP presents an even bigger challenge; there's more chemical diversity, a huge number of possible structures to be evaluated and often no single correct result. Further, for CSP to be a useful method the structural models generated need to be correct at a finer scale than protein predictions.

"Reliable and computationally tractable CSP would revolutionise aspects of drug & agrochemical development and would lead to new organic material design methods in other fields." Jason Cole, Senior Research Fellow at CCDC explains. "Being able to accurately predict the properties of crystalline materials before they are synthesised would have huge impacts in drug safety, material stability and more. But the myriad of factors that affect small molecule structure, packing and stability make this a difficult problem to tackle - the blind test aims to support further development in this important field."

Find out more about the CSP Blind Test, see previous results and apply to participate on the CCDC website.