Penrose–Mackay–Shechtman and bringing down the dogma about fivefold symmetry 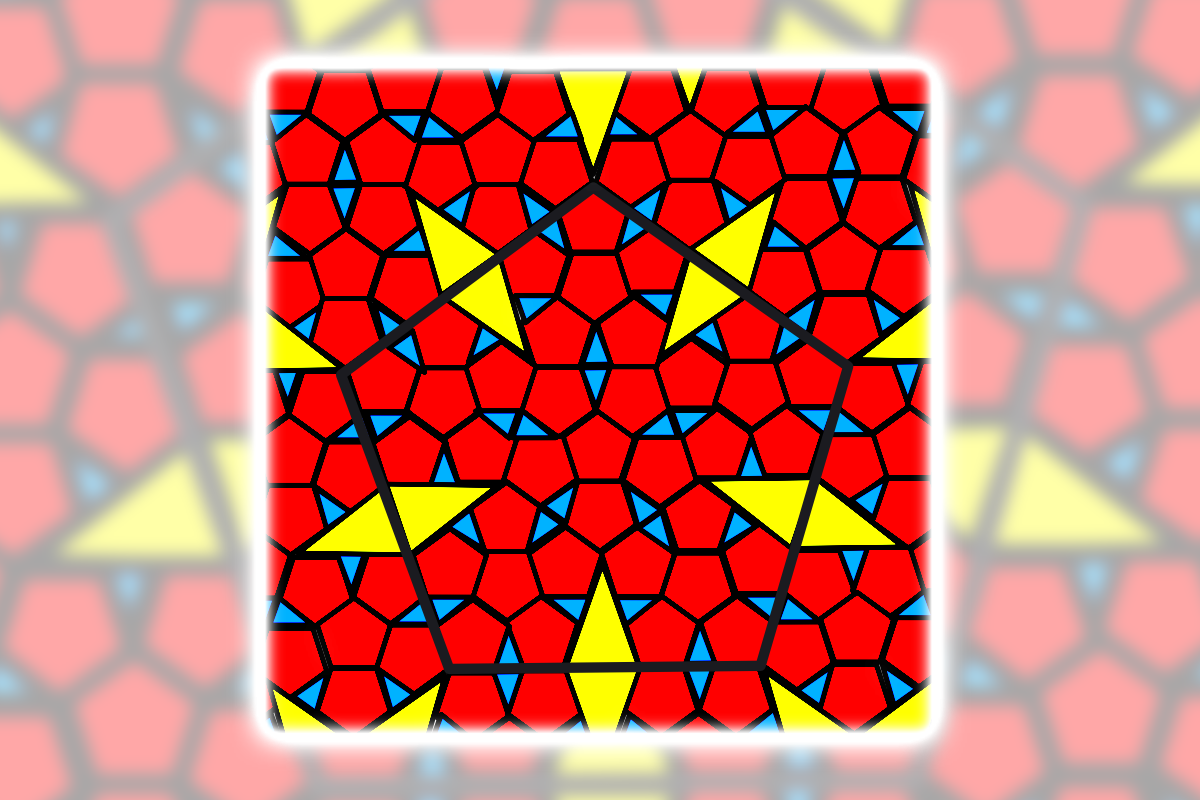 Crystallographers have known Roger Penrose for a long time for the Penrose patterns. For the fresh (2020) Physics Nobel laureate, serious science and playful doodling have never been rigorously separated. Once, around 1972, he noticed a pentagonal logo on a letterhead: a regular pentagon at its center, surrounded by five same-size pentagons, making a larger pentagon. The contour of this scheme left five triangles uncovered. Penrose cut up a seventh same-size pentagon, which yielded five triangles to fill the gaps and left a smaller-size pentagon unused. The continuation of this scheme resulted in the simplest Penrose pattern. He built more sophisticated patterns, all involving fivefold symmetry, and published a paper about these patterns in an obscure mathematical journal [1].

Left: Roger Penrose in 2000 in his office at Oxford University, UK (photograph by IH), and right: generating the simplest Penrose pattern (courtesy of Alan L. Mackay).

When Martin Gardner wrote about the Penrose patterns in Scientific American [2] it garnered a great deal of attention, but was still considered to be hardly more than a mathematical curiosity.

At some point in time there was an unrelated reason that added to the fame of the Penrose pattern. It was a lawsuit because of an unauthorized use of the Penrose pattern on a toilet paper. A company, called Pentaplex, had been operating, making things based on Penrose's designs, and another company encroached on it without agreement. Not much has transpired about the lawsuit because there was an out-of-court settlement. The Penrose pattern still appeared on the toilet paper following the settlement, but, by then, it did so with an agreement. The issue was not whether the pattern on the toilet paper was produced by some mathematical formula. The question was whether a certain pattern had been directly copied. This is an important distinction. A piece of mathematics could not be judged as being private property or public property, because it could only be judged as public property. 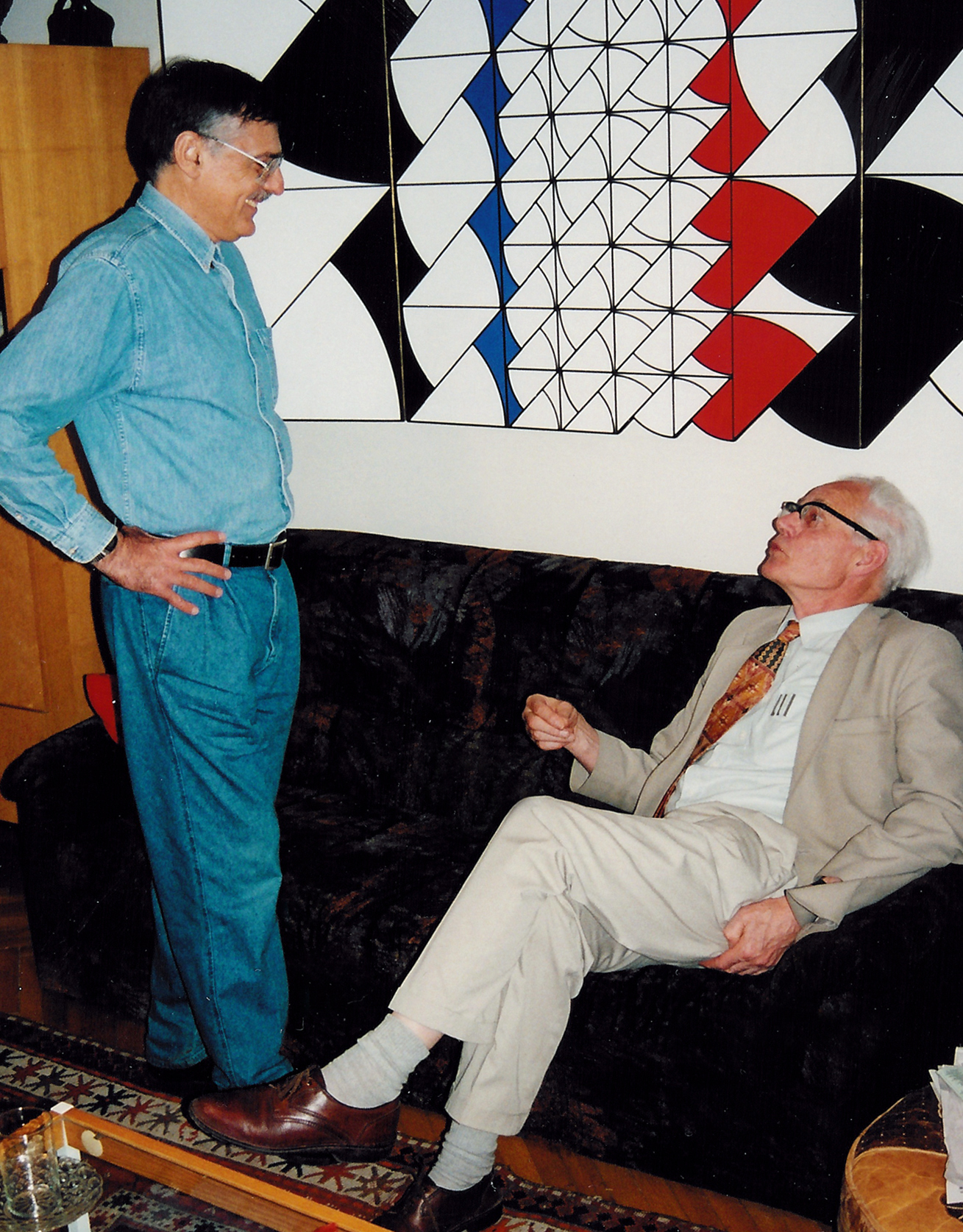 Dan Shechtman (left) and Alan L. Mackay (right) in 1995 in the Hargittais’ home in Budapest, Hungary (photograph by IH).

Enter Alan L. Mackay who had been a champion of questioning dogmas in crystallography (and elsewhere). He was a J. Desmond Bernal disciple at Birkbeck College and icosahedral structures used to be one of his major interests. He had long been intrigued by the rule of classical crystallography according to which fivefold symmetry was impossible in extended structures. The Penrose pattern made him initiate a simulation experiment: to shine light onto such a pattern and see whether a diffraction pattern might result. It did, and it indicated tenfold symmetry, being as forbidden in classical crystallography as fivefold symmetry. He published his simulated diffraction pattern in 1982 and issued a warning that we might ignore fivefold symmetries even if we experience them if we blindly believe the dogma about their impossibility [3]. In September 1982 Mackay gave two lectures on fivefold symmetry in Budapest and repeated his warning. One of us (IH) was present at the lectures (actually, IH had initiated Mackay's visit). The reason IH was not more impressed than he was was because his primary interest was in molecular structures where no such rule of restriction ever existed. Unbeknownst to Mackay and his audience, earlier in the same year, in April 1982, the Israeli scientist Dan Shechtman, visiting the US National Bureau of Standards (as it was then), did observe tenfold symmetry. It was displayed in the electron diffraction patterns of an aluminium/manganese alloy. Shechtman was aware of the dogma – as a student once he had to prove it mathematically as part of an exam. Nonetheless, he believed what he observed and recognized its significance, but it then took a long time for him to convince others and to have his observation published [4]. What he observed were quasicrystals – a name coined by the theoretical physicists Paul Steinhardt and Dov Levine, at the time at the University of Pennsylvania. They constructed a model to describe such structures but alas, they kept their model in a drawer and published it only after Shechtman's observation had finally appeared in print [5]. This should be considered an effect of the dogma about fivefold symmetry in extended structures. This further points to Mackay's courage and integrity in this story. When Shechtman's well-deserved Nobel Prize for the quasicrystal discovery was announced in October 2011, Penrose wrote a letter to Mackay in which he stressed: 'If anyone had been clear in the prediction that quasi-symmetric 5-fold/10-fold patterns might underlie a completely new area of crystallography – where the very way that such materials might indeed be identified through their characteristic diffraction patterns – it was clearly you.' [6] 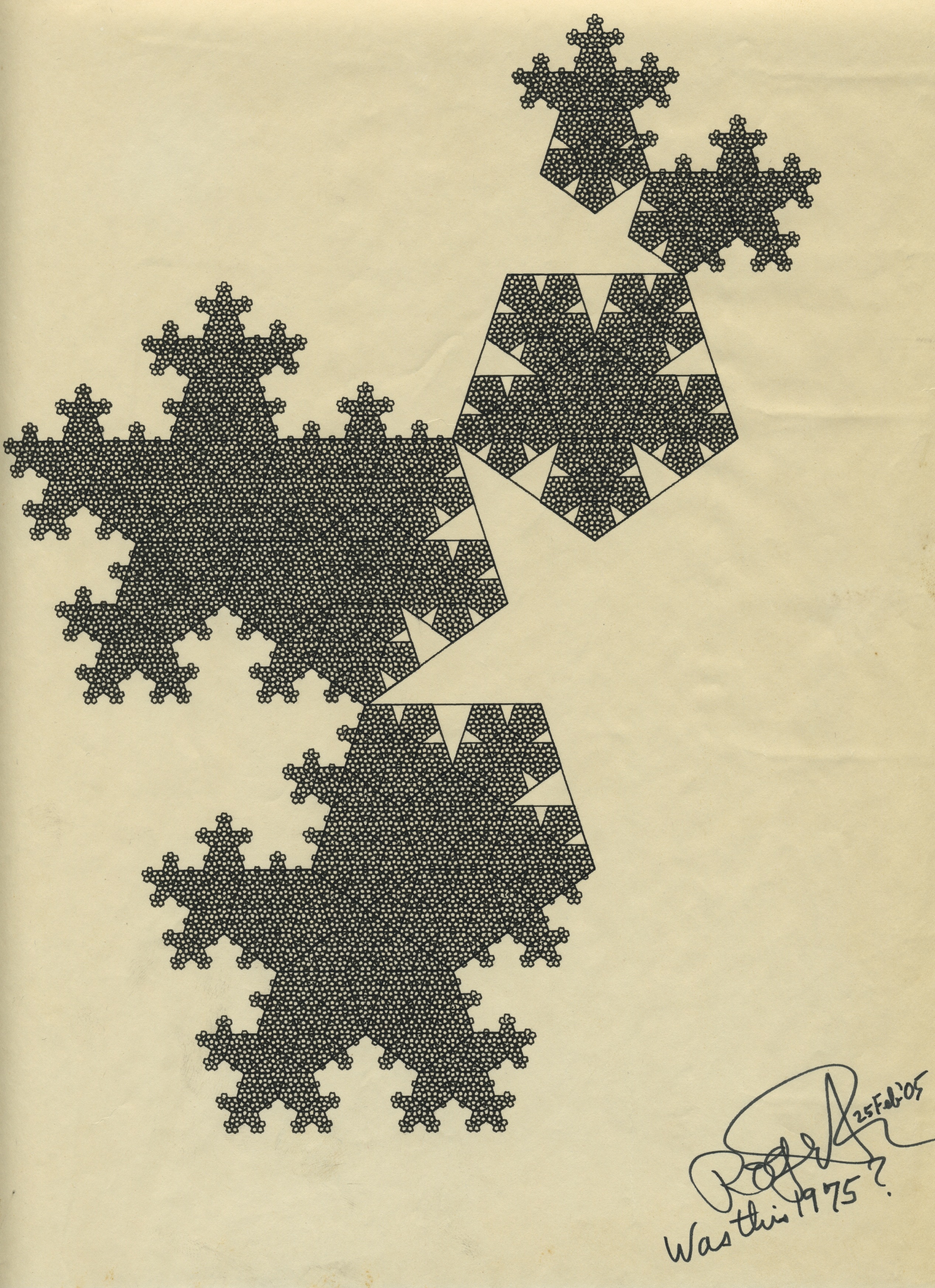 Computer-automated drawing of “Pentagonal snow crystal” by Robert H. Mackay in 1975. This was drawn originally by hand by Roger Penrose, and he autographed it in 2005 (courtesy of Robert H. Mackay).

Back in 1975, Alan Mackay informed Roger Penrose about the simulated light diffraction experiment on the Penrose pattern. At the time they met, Penrose was experimenting with an extended pentagonal network that could be considered to be a pentagonal snow crystal as compared with the usual hexagonal snowflakes. Mackay's son, Robert, was present and Penrose gave him a copy of his hand-drawn pattern. Robert was a student at York, and when he returned to his computer, he automated Penrose's drawing. The computer ran out of time at some point, hence the pattern of the pentagonal snow crystal was left incomplete. This has the advantage of showing many different parts of its generation, and it is more informative of how it came about than a completed pattern would have been. This computer-generated pattern is shown above. At the time, Penrose and the two Mackays thought this to be a theoretical exercise and years later they were astonished when Shechtman turned up the real thing. Thirty years later, Robert asked Penrose to autograph the drawing.

For further reading on the background and historical details, see also references [7] and [8].

[6] Private communication from Robert H. Mackay to IH by email on 9 October 2020.