In and out: crystal engineering for reversible iodine uptake 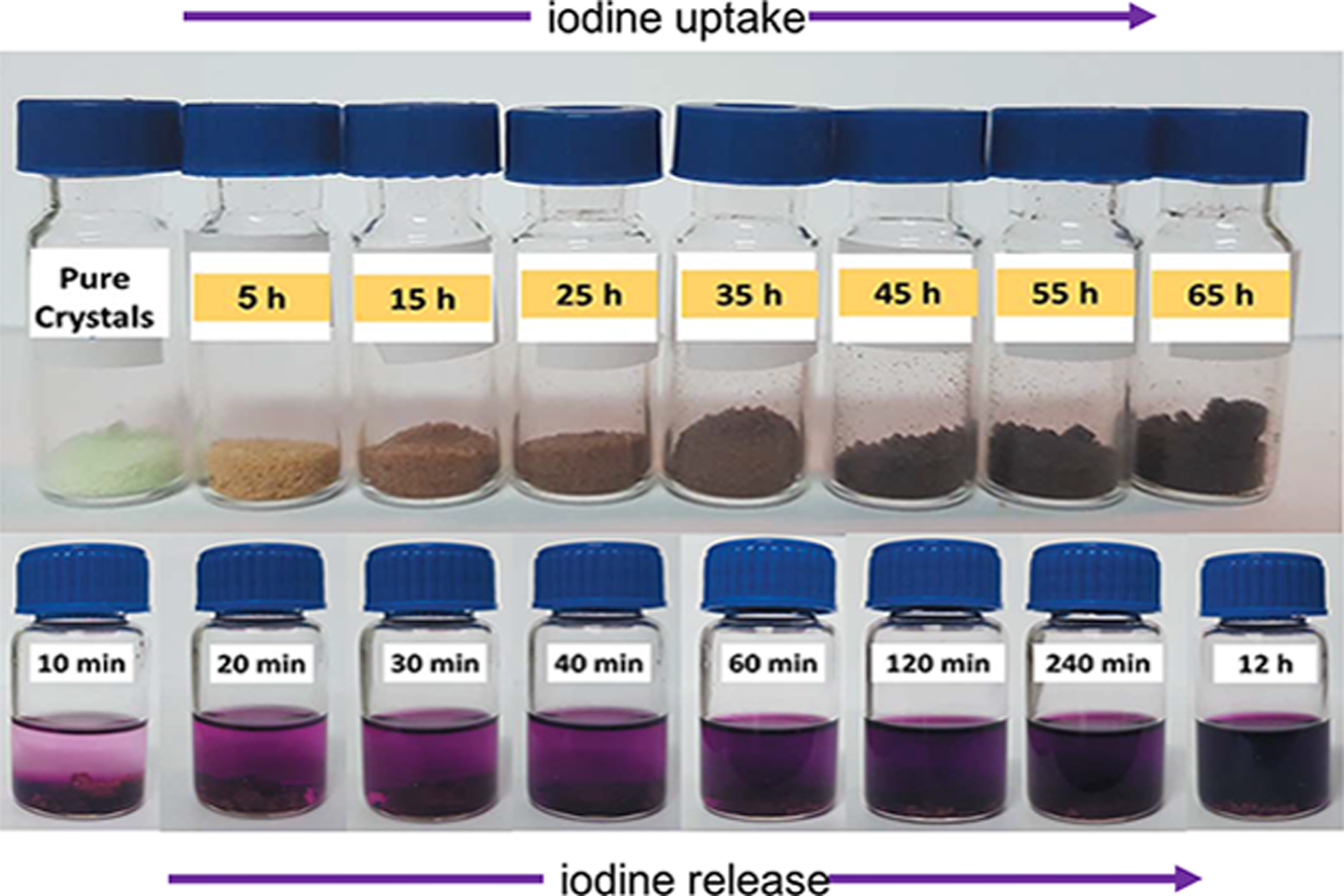 In the October 2020 issue of Acta Crystallographica Section B, Moghzi et al. (2020) report the chemical design of a metal–organic compound with an outstanding iodine (I2) sorption capability. Sequestration of I2, an extremely volatile gas, has important applications in terms of controlling radioactive gases, as various radionuclides of I2 are released during the fission of nuclear fuels. Thus, the preparation of porous materials that can efficiently capture and store I2 is of importance not only from an academic point of view, but also for real-life applications.

In their report, the authors nicely illustrate the process that has been followed to prepare the final material, demonstrating the importance of careful evaluation of the different crystal structures obtained. In other words, Moghzi and co-workers show an example of the crystal engineering process, i.e. the understanding of intermolecular interactions in the context of crystal packing and the utilization of such understanding in the design of new solids with desired physical and chemical properties. In this sense, they have fine-tuned the synthetic conditions in order to control the dimensionality of the product, from discrete units (0D), to chains (1D) and layers (2D). More specifically, the authors show that the dimensionality of the final coordination polymer is dependent on the coordination mode of the N-heterocyclic polycarboxylic acid used (pyridine-2,6-dicarboxylic acid or pyrazine-2,3-dicarboxylic acid). This, in turn, depends on the pH of the initial solution, which is varied with the addition of piperazine, a base that also acts a second ligand. These findings, key for the successful chemical design, have been made possible thanks to a detailed analysis of the crystal structures.

In order to further expand the dimensionality of the coordination polymers to form a 3D metal–organic framework (or MOF), Moghzi and co-workers replaced the N-heterocyclic polycarboxylic acid with a Zn-based metalloligand, with the aim of connecting the 2D layers in the third direction thus forming a 3D structure. The combination of the metalloligand with a praseodymium salt results in a bimetallic crystalline material which expands in the three dimensions, as was anticipated by the authors. In addition, this structure is thermally stable (up to 400°C), an important aspect for applications.

This MOF, upon exposure to iodine vapours, is capable of incorporating I2 molecules, as revealed by the gradual colour change of the solid, which turns dark brown over time (see Fig. 1, top). In addition, gravimetric measurements reveal a mass increase over time, with a remarkable maximum amount of sorbed I2 (490 mg g−1) after 45 h. This value places this novel material among the best MOFs in terms of I2 sorption.

The reverse process, i.e. the release of I2, has also been investigated by this team. In particular, they used cyclohexane, a common organic solvent, to extract the incorporated I2, and used spectroscopic techniques to follow the process. However, as iodine solutions are strongly coloured, the process can also be followed visually, as can be seen in Fig. 1 (bottom). Still, UV–vis spectroscopy was used to confirm that release is completed after 4 h.

Once the reversibility of the process was established, Moghzi and co-workers studied its cyclability, revealing that the capacity of this compound remains almost intact after four cycles of adsorption–desorption. Although clearly this is not a massive number of cycles, it is a first step that reveals the potential of the material for iodine sequestration.