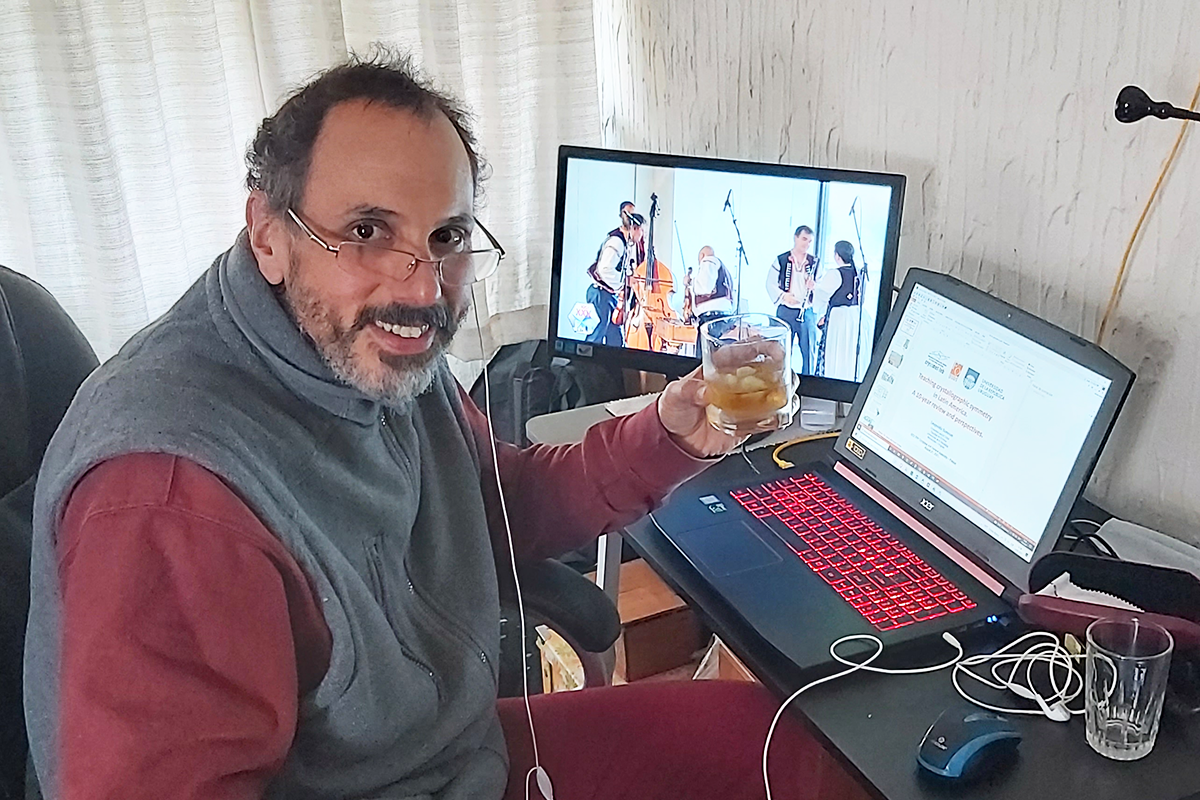 Leopoldo Suescun settles down to watch the Opening Ceremony from his home in Uruguay.

Radek (Kužel), Ivana (Kutá Smatanová) and Pavlína (Řezáčová) make an awesome trio. The IUCr Congress that they organized along with their team in circumstances as complex as those imposed by the pandemic was an extraordinary success. From my point of view, it has been a model congress in various aspects. The organization on-site was lovely, with many young people ready to help you, a reasonably wide social program with music playing a central role, and outstanding catering for everyday coffee and lunch breaks. I still remember the taste of the spinach cream, the goulash and the Mexican (kind of Azteca) soup provided during the normal days of the Congress.

I guess everybody will agree that the Conftool platform used for registration and abstract submission, reviews, etc. was excellent. The rooms for microsymposia and keynote and plenary lectures were well equipped. Two technicians in each room made sure that audio and video quality was under control, while young people in the rooms made sure that the audience used the microphones so that everybody in the world could participate.

But it has also been a model as a virtual congress. My experience as chair and as a lecturer on-site confirms it. I arrived late to my first session as chair on-site. I was nervous about not managing the situation because the keynote speaker was already waiting for me in her Institute. However, the technicians in the room explained to me in one minute (textual) how to use the platform. And it worked perfectly. I think that the next IUCr Congress in Melbourne and other conferences and workshops could learn very much from the excellent platform used for the hybrid presentations – gCon developed by T.R.I. In the near future, I guess that hybrid conferences, allowing virtual and live presentations, will be the norm. This is why the Prague Congress will be a landmark and a mirror where future organizers will look for information and methodology.

We know that big challenges offer big opportunities. Radek, Ivana and Pavlína took this big one and imagined new solutions for IUCr2020/2021 and the future. And yes, this will be the Congress where for the first time, we all started our presentations with "Good morning, good evening, good night, wherever you are in the world."

- "I will need to shift my timetable to adjust to the Congress for the next week."

- "Don't be noisy. I'm not attending" was her laconic answer.

That was the beginning of an intense week of workshops, lectures, short talks, chats and online encounters with friends and colleagues from all around the world.

The hybrid IUCr Congress was a great event I enjoyed almost as much as if I had been there.

I must confess I was not very ready. Being at home, travelling daily to the office, with normal everyday activities, and no 24-hour period of travelling, hadn’t given me the usual impetus to dive into the details of the extensive program, so I only had a few scheduled events in my calendar (opening ceremony, my students’ posters and my microsymposium), those I could not miss. Having barely examined the program, I had explored the gCon platform even less in order to see how things were going to work. Surprisingly, a few hours into Saturday afternoon (my time) the straightforward use of the platform was clear and my enthusiasm was high.

I greatly enjoyed and made profit from the flexibility of the platform. The chat space was good to look for colleagues and drop some lines, and also receive greetings and questions.

The virtual foyer looked awkward in the beginning, but turned out to be very useful for wandering around, finding colleagues by chance and enjoying an informal videoconference or a planned meeting. The Questions tab in the talk windows was also a great way to interact. Further proof that I was there. Last, but not least, switching from one session to another in a couple of clicks truly enabled me to see a lot more of the Congress scientific program than I usually do.

If I had to give a suggestion for improvement for future hybrid events, I would change the person-to-person video conference capability in the poster sessions. First, it was rather short, second it felt awkward to enter a virtual room with someone you probably don't know and start asking questions. Maybe if this feature was integrated into the virtual foyer, where you could see not only the posters without necessarily approaching the presenter but also the presenters and the circles of people asking/discussing with him/her, in a more public/less personal setup it would be easier to interact and also an experience closer to the in-person one.

Regarding the scientific talks, I am looking forward to watching all those I missed, so I can't choose the one I liked the best yet. However, there is a short list of colleagues I have already contacted after their very inspiring talks. If I had to choose a couple that I enjoyed a lot, those were the Keynote Lecture by Harold Stokes and the Ewald Prize Lecture honoring Olga Kennard given by Suzanna Ward.

Besides all the very interesting talks I attended, the microsymposium that inspired me the most was MS-8 "Social media and new frontiers for spreading crystallographic ideas" co-chaired by Helen Maynard-Casely and Andrea Ienco. As a social media user and follower of Helen on Twitter, I found the session to be even more entertaining and informative than expected. It was perfect to have it on Sunday because it charged my batteries for the great science to come. This kind of microsymposium should be repeated at future congresses, as it helps us find better ways to communicate our science to the public and also to our students. Following this session, I decided to include a meme at the end of every class in my Crystallography course next year. Maybe I'll share them. Follow me (@leopoldosuescun) :-).

As I’m writing this, about a week after the closing ceremony ended, I'm still enjoying many of the talks I missed but also trying to evaluate the event.

I missed the many na zdraví I would have enjoyed, the many hugs and handshakes and the many shared mate sips. But the science and the social parts were still there, so I have not missed the fruitful exchange of ideas and contact with the community. For all the good of this I thank Radek and Ivana who became my friends in Hyderabad, and Pavlina and Hašek, whom I hope I will be able to thank personally in Melbourne.

Some of the things that I missed as a virtual participant were joining colleagues over meals, trying local food and drink, and exploring a new part of the world. Surprisingly, what I did not miss was new science and ideas! The virtual platform was excellent. It was simple to navigate and convenient to move from one session to another, without disturbing anyone in the room. Further, the availability of the recordings after the Congress meant that I was able to review lectures that I could not attend in real time and that I could re-watch lectures that I especially enjoyed (for example, the lectures in the session on “Science meets art: Crystallography and cultural heritage”!).

The virtual chat/mail functions enabled me to privately write to presenters as soon as their lecture was finished to ask questions and arrange for individual virtual discussions. It was also perfect for sending little notes to the vendors, and others in the virtual exhibit, even during times when the booths were not staffed.

The quality of the video and audio from the General Assembly was clear, and while I was disappointed not to be present to congratulate our new Executive Committee members and President of the Union, I was still happy to be able to participate in real time with the General Assembly proceedings.

A special thank you to Radomír Kužel and all members of the local organizing committee. It is hard to conceive of the enormity of planning for the Congress and General Assembly amidst a global pandemic. But this team truly broke ground with respect to inclusive meeting practices for our members and created an event that will be a model for the future.