'Summertime, and the livin' is easy' - or so go the lyrics from the famous George Gershwin tune. Our summer months are going by quickly, and the intensity of activity will only pick up as we approach the ACA, ECA and LACA conferences being held between late July and early September. 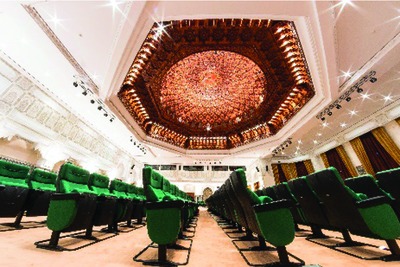 Photo from 'Crystallography for the Next Generation: the Legacy of IYCr' held in Rabat, Morocco. Lecture theatre at Academy of Science and Technology of Morocco (photo by Ilia Guzei). 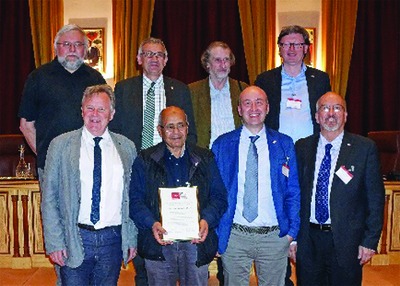 Hopefully, you have heard about the successful 'Crystallography for the Next Generation: the Legacy of IYCr' conference held on April 23-24 in Rabat, Morocco, under the High Patronage of His Majesty King Mohammed VI (www.iycr2014.org/legacy/conference). The conference was jointly organized by the IUCr and the Moroccan Crystallographic Association, under the auspices and with the support of UNESCO, ICSU ROA and TWAS. Held in lieu of a 'closing' ceremony for the International Year of Crystallography, this conference reviewed the activities of IYCr to consider what was successful, what was not so successful etc., with the goal of identifying activities that we should try to sustain as ongoing programs. The IYCr website lists some 545 organized IYCr events, so obviously not everything could be presented. While there was a focus on the achievements that have taken place in Africa, there was good representation from all four Regional Associates of the IUCr and of the IUCr EC.

Those who were lucky enough to attend the conference benefited both from the collegiality of those attending and the quality of the scientific program. Ted Janssen, Ewald Prize winner, gave the opening lecture on 'Crystallography in the 21st Century'. An impressive number of young crystallographers were featured as speakers, and the winners of the IYCr2014 crystal-growing competition were announced. One outcome of the conference was a letter of commitment to sustain the activities of IYCr for future generations by continuing to enhance the stature of crystallography, to build capacity in developing regions of the world, and to further the public understanding of science in general and crystallography in particular. A copy of this letter can be found in this IUCr Newsletter (here). The letter was signed by myself as President of the IUCr, Maciej Nalecz, the Director of the Science Policy and Capacity Building Division of UNESCO, Romain Murenzi, Director of The World Academy of Science (TWAS), Edith Madela-Mntla, Director of the International Council for Science-Regional Office for Africa (ICSU ROA), and Gregory A. Petsko, President, International Union of Biochemistry and Molecular Biology, IUBMB, with additional endorsements expected. We are grateful for this showing of support, and especially grateful to the conference co-chairs Abdelmalek Thalal, Claude Lecomte and Michele Zema for their efforts to make this conference such a success.

The legacy of IYCr is all around us, and many of its initiatives are now part of the fabric of the IUCr. The first issue of IUCrJ was published in January 2014. Thanks to the efforts of our Editor-in-Chief Samar Hasnain and many of you, we are pleased that Thomson Reuters has informed us that IUCrJ has been selected for coverage in Thomson Reuters' products beginning with our first issue. It will be indexed and abstracted in Science Citation index, and in Journal Citation Reports and Current Contents. The second IUCr crystal-growing competition is now open with a November 22, 2015, deadline. The Timelines of Crystallography preserve much of our history, similar to a family tree for those who enjoy genealogy, and serve as a wonderful educational resource. The Crystallography365 set of daily blogs by Helen Maynard-Casely and her team is both beautiful as well as educational and well worth another look. And the training of future generations of crystallographers continues with more OpenLabs, such as the recent ones held in Algeria and Tunisia in May of this year and future OpenLabs planned for Kenya, Mexico, Senegal and Cambodia.

It was good to see many of you at the ACA regional meeting in Philadelphia (July 25-29) and the ECM29 in Rovinj (August 23-26). I also want to remind you that the first LACA regional meeting will be held in São Paulo (September 9-11). Of course, plans continue for IUCr 2017 in Hyderabad. The EC will meet in August in conjunction with the ECM in Croatia. The Commissions play a major role in helping put together the programme for our Congress and they have been asked to suggest names of individuals for consideration on the International Programme Committee. In addition to appointing the IPC, other proposals to be considered by your EC are whether to create an IUCr Associates program and the use of IUCr Data to handle more routine structural papers.

As I stated in my last column, thanks to IYCr2014 crystallography is enjoying a 'celebrity' status it has long deserved but has not enjoyed. For example, Juan Manuel Garcia Ruiz' film 'The Mystery of the Giant Crystals' has had over 17,000 hits and the entire film has been reproduced over 6000 times in 82 countries! I want to continue to encourage everyone to build on the momentum we have enjoyed during IYCr. There is no reason we should stop promoting crystallography just because our International Year has run its course. We began IYCr2014 with a booklet entitled 'Crystallography matters!', produced jointly by the IUCr and UNESCO. That booklet has now been translated into 15 languages! As we move forward, the message we want to send is that 'Crystallography matters … more!'.

It has been my honor to serve as your IUCr President this past year. Please do not hesitate to contact me or any member of the EC with your concerns, comments or suggestions for how the IUCr can work more effectively to serve you.