Building a legacy for IYCr2014 in Africa

The Cambridge Crystallographic Data Centre (CCDC) has a mission to make the wealth of structural chemistry data contained in the Cambridge Structural Database (CSD), the world's repository for organic and organometallic small molecular crystal structures, accessible to all researchers, including those operating in more challenging environments. In 2007, at the instigation of Professor Luc Van Meervelt of K. U. Leuven, Belgium, the CSD was provided for use in the structural chemistry research group of Professor Zéphirin G. Yav at the University of Kinshasa, Democratic Republic of Congo, as part of a year-long British Council-financed Science Training Laboratory project. 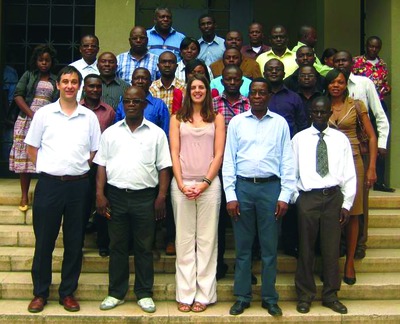 Group photo from a CSD workshop at UNIKIN.

The relationship between the CCDC and the University of Kinshasa (UNIKIN) has developed further from 2012 onwards, with CCDC staff spending time with our colleagues in Kinshasa in June 2012, 2013 and 2014. The CCDC provided training through seminars and practical workshops to a number of UNIKIN academic and research staff as well as MSc/PhD students covering the following topics:

These annual visits led to the establishment of joint research goals and ultimately to the launch of the CCDC Student Scholarship Programme in Kinshasa, beginning in the academic year 2013-2014. This programme provides a framework of financial support and academic co-supervision to two postgraduate structural chemistry students based in Kinshasa: an MSc student during his final-year research project, and a PhD student for the duration of his three-year degree (to include some periods of research undertaken at the CCDC in Cambridge, UK). These two research projects are concerned with using the CSD and quantum mechanical calculations to investigate sigma-hole and hydrogen-bond intermolecular interaction geometries and energies in selenium-containing compounds.

This on-going collaboration shows that structural chemistry research can be successful in places where the lack of equipment, of reliable internet access and of access to resources for teaching and research make for a challenging environment. The CCDC is also helping to build crystallography expertise more widely in the Democratic Republic of Congo by training more scientists at UNIKIN, and is attempting to source a second-hand single-crystal diffractometer to be donated to the University of Kinshasa to enable the research groups to run their own diffraction experiments rather than having to send their samples to other countries to be analysed.

The CCDC is contributing to the development of crystallography and structural chemistry in other parts of Africa and thereby strengthening the legacy of the International Year of Crystallography 2014 by working with Lewis Whitehead of the Novartis Institutes for Biomedical Research in Massachusetts, with further input from lecturers at the University of Nairobi and Kenyatta University, to put together a one-week series of lectures and workshops which will provide an introduction to computational chemistry and in silico visualisation for Sub-Saharan African scientists. Additional funding has already been secured from the IUPAC, the ACS and the IUCr, and this training event is now scheduled to be held in Nairobi, Kenya, in early September 2015. The overall aim of this OpenLab event is to train the teachers to use software suites and build structural chemistry knowledge so they can then train others, and knowledge transfer becomes self-perpetuating.