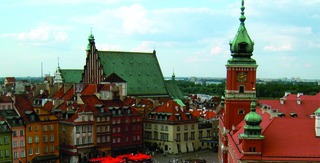 The MultiPoles gathered in May 2015 at the monument to Nicolaus Copernicus in Warsaw.

Crystallography has a prominent place in the academic landscape of Poland, and many Poles (MultiPoles) are quite active in the field throughout the world. They work at prestigious universities and research institutes and at advanced synchrotron centers, and contribute to methods development and large-scale initiatives. The reason for this may be that in Poland crystallography is still taught to undergraduate students, and exact sciences used to be (the Past Tense intentional) strong at the secondary-school level. Another idiosyncrasy is that crystallographers with Polish roots stick very much together and somehow have been able to overcome one of our national 'virtues', summarized as 'where there are two Poles, there are at least three opinions'.

Polish crystallographers from around the world, and a contingent of bioinformaticians, met together, for the second time, in Warsaw on May 10-13, 2015 (multipole-meetings.org), in the beautiful Staszic Palace, with Copernicus' statue in front of it. A committee chaired by Janusz Lipkowski as a coda for the International Year of Crystallography IYCr2014 organized the conference, titled 'Multi-Pole Approach to Structural Science'. The Program Committee headed by Alex Wlodawer invited ∼50 speakers. The acceptance ratio of nearly 100% generated a very exciting program. The meeting was held under the patronage of the Minister of Science and Higher Education and was supported by the Polish Academy of Sciences and its President, Jerzy Duszyski.

Alex Wlodawer gave a historical review of crystallography, and Zbyszek Dauter presented the MultiPoles in a subjective looking glass. The Keynote Lecture was delivered by Ada Yonath. She described her family's journey from Zduńska Wola (a small town in Poland) to Israel and her own scientific journey under the flag of the ribosome. The remaining talks were divided into sessions on Proteins and Nucleic Acids, Structural Enzymology, Signaling and Immunology, Large and Challenging Structures, Macromolecular Modeling, and Methods and Validation. Although the program was dominated by structural biology, it also included talks on small-molecule and supramolecular structures, nanocrystallography, and crystallography beyond the independent-atom model. In addition, over 100 posters were presented by the younger participants. Two poster prizes, sponsored by the FEBS Journal and HKL Research, went to Maria Górna (CeMM Vienna, Austria) and Nadia Opara (Paul Scherrer Institute, Switzerland), respectively. The total number of over 200 registered participants vastly exceeded the original plans.

An important session organized in the middle of the conference by Andrzej Legocki was focused on Poland's accession to EMBL. The session started with a lecture by Iain Mattaj, Director General of EMBL, and was continued as a panel discussion, with the participation of Maciej Żylicz from the Foundation for Polish Science (FNP), and Włodzisław Duch, representing the Ministry of Science and Higher Education. At present, Poland has the status of Prospect Member State, and is committed to becoming a Full Member within three years.

The conference banquet was held in a beautiful chateau in Jabonna, 20 km north of Warsaw. The participants left Warsaw with lots of new ideas, new and rekindled contacts and friendships, nice photographic albums, a biography of Maria Skłodowska-Curie, another predecessor of the MultiPoles, and with a firm pledge to meet in a few years again, most likely in Poznań.