Crystal-growing competitions have been run successfully for many years in a number of countries. As one of the objectives of the International Year of Crystallography was to introduce students to the exciting, challenging and sometimes frustrating world of growing crystals, the organizers of a number of national and regional competitions wanted to share their experience with future organizers around the world. The IYCr in 2014 provided perfect timing to start many new regional and national competitions. 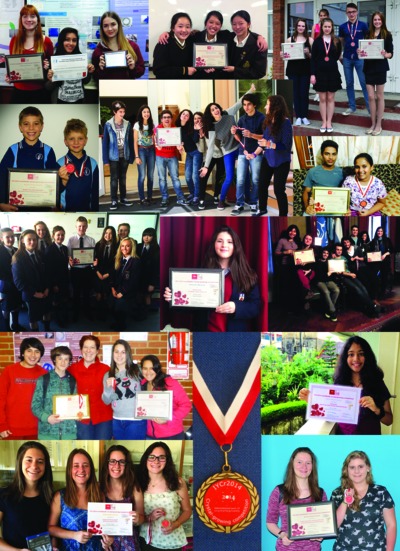 Some of the proud winners from schools in Argentina, Australia, Belgium, India, Lithuania, Portugal, Spain, UAE and UK.

A brochure was produced to provide newcomers with the necessary information to join this exciting venture of growing single crystals. Not only a scenario to set up a competition and some basic tips on how to get started with crystal-growing experiments were provided, but also support was offered by a small working group of coordinators of existing national competitions. In addition a new animated video 'How to grow a single crystal - with Johanna' was created to show the basic steps of growing large single crystals at the level of schoolchildren. These materials are available at the IYCr2014 website: www.iycr2014.org/participate/crystal-growing-competition-2015. At the end of 2014 we were able to locate at least 34 regional and national crystal-growing competitions.

To establish a vibrant worldwide network of schools participating in crystal-growing experiments, a worldwide competition open to all schoolchildren up to 18 years old was set up. It is of course not realistic to grow during the same period of time single crystals of the same compound in every country. Instead the participants were asked to convey their experiences through videos or essays. A panel of judges has evaluated all the entries - 134 entries in total from 25 countries - using the following criteria: creativity, aesthetic value, description of working plan and experimental work, clarity of explanations and scientific background. A difficult job, as the quality of the submissions was amazingly good!

Five gold, silver and bronze medals, together with 12 honorary mentions and four creativity prizes, were awarded for the videos category, whereas for the essays category, three gold, silver and bronze medals and seven honorary mentions were awarded. The official announcement of the laureates took place during the IYCr2014 Legacy launch conference in Rabat (April 22-24, 2015). Medals, certificates and prizes were sent by mail to the laureates by the end of May. All winning entries are available at the website of the competition. Have a look - some of the videos are really professional and can be used in motivating others to start their own crystal-growing experiments!

Following the great success of the IYCr2014 competition, the IUCr has announced the 2015 edition of the worldwide crystal-growing competition for schoolchildren. This time only videos can be submitted; the closing date for submissions is November 22, 2015.

The IUCr has also organized, together with UNESCO, a special crystal-growing competition for selected schools belonging to the UNESCO Associated Schools Network, which ran for a period of four weeks in October-November. A total of 51 crystals were submitted to UNESCO headquarters from participants in Singapore, Benin, Argentina, Cote d'Ivoire, France, Zambia, Cape Verde and Switzerland. The laureates of this competition were participants from Yishun Town Secondary School in Singapore, Benin Université in Benin and Colegio Juan Demonte No. 2701 in Argentina.

The IYCr team asked the winners of the 2014 crystal-growing competition for schoolchildren how they had heard about the competition and how they would like to learn more about crystallography-based topics at school. Here are some of their replies:

I heard about the competition on the website and as I had been growing crystals for over 5 years I thought that it would be good to enter. I have been inspired to grow bigger Alum crystals but in saying that I want to learn how the study of crystallography can be used to make more effective medicine, better tasting food and more. I love growing crystals.

We heard about the competition through known contacts at the Indian Institute of Science (IISc) in Bangalore. We hope to learn more about crystallography-based topics through your website and hands-on working in IISc. It was a great learning experience and a very interesting and challenging project for both of us.

We heard about the IYCr2014 worldwide crystal-growing competition through the Assistant Principal of Holy Family Primary School. She was made aware of the local state competition by the organiser, Dr Ashraf Ghanem (University of Canberra - Royal Australian Chemical Institute). Dr Ghanem organises the local competition and invited the winners to submit their reports to the IYCr2014 website. It would be nice to have lectures given by experts in the field, even short internet-based presentations where schools can log in from all around the world. These could be provided in real time or afterwards as a YouTube video. We thought maybe a series of weekly or monthly lectures introducing the topic of crystallography with basic details and some experiments that would, over a period of time, delve further into the wonderful world of crystallography. These videos would have to be carefully tailored for the appropriate age group.

I am very much interested in participating in the competition this time around also, as it was great fun and an excellent learning experience for me. I have informed many of my friends who are interested. I heard about the crystal-growing competition when I was browsing the Internet for some interesting science project ideas. I saw the competition introductory video and found it very interesting. Then, as I learnt more about crystals I found it quite fascinating and decided to participate in the competition. I learnt a lot during the research on crystals and uses of crystallography during last year's competition. I learnt how crystallography underpins all sciences from biology and genetics to structural, IT and automobile engineering. At school, I would love to experiment to see how the structure of matter and arrangement of atoms changes the core properties of the materials. I would like to learn how crystallography is helping develop new drugs. As I am in middle school exploring various avenues for my future career, learning about crystallography has opened new horizons of opportunities and unlimited possibilities.