The European Photon and Neutron (EPN) facility in Grenoble hosted the 2014 BCA Biological Structures Group winter meeting, December 15-17. The first session, Research Infrastructures, chaired by V. Fulop (Warwick), began with a presentation by H. Reichert, the ESRF Director of Research for Physical Sciences. There are 21 member countries and 8 associate members. Approximately 30% of the proposals are biological. An upgrade to improve the facilities for structural biology and soft matter, analysis of extreme conditions, time-resolved studies, nanotechnology and X-ray imaging is underway. Phase 2 will involve building a new storage ring to provide a two-orders of magnitude increase in intensity. Studies including low-dose in vivo tomography for high-resolution imaging of cells involved in the neurobiology of ageing and high-resolution neutron diffraction studies of pyrophosphatase, fatty-acid binding protein and HIV protease were described. 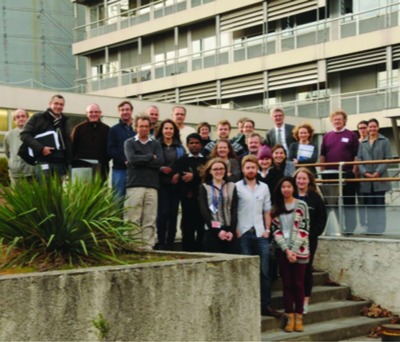 The next session began with a presentation on recent developments in single-particle electron cryo-microscopy by C. B. Schaffitzel (EMBL). P. Williams (Astex Pharmaceutical, Cambridge, UK) gave an intriguing account of how protein crystallography has been utilized for high-throughput fragment screening in parallel with biophysical, spectroscopic and other techniques. With the advent of XFEL and developments in in situ data collection and compound handling, the future looks particularly bright for crystallography as a drug-screening technique. Studies of bacterial DNA ligase, a good target for new antibiotics due to a difference in its cofactor requirement from the human host enzyme, were described. D. Scott, (Nottingham) described the use of neutrons to study intrinsically disordered proteins and their interactions with DNA. G. Leonard (ESRF) explained how fully automated data collection from 'sludges' of micro-crystals mounted in loops and processed by techniques that are currently being developed for XFEL serial crystallography are likely to make major breakthroughs in structural biology. Fast-readout detectors may allow us to go back to room-temperature data collection as a routine technique. T. Forsyth (ILL) described the LADI-III instrument using a quasi-Laue beam and perpetuated samples to allow work on crystals as small as 0.1 mm3. Time-of-flight spectroscopy, back-scattering and spin-echo studies have all allowed the dynamics of proteins to be studied and complement X-ray, NMR and EM techniques.

In a session on Structural Biology on the EPN campus, S. Cusack (EMBL, Grenoble) explained that influenza is a segmented negative-strand orthomyxovirus, which uses ribonucleoproteins to package its eight mini-chromosomes. The swapping of these chromosomes between different strains of the virus causes new and serious epidemics or even global pandemics to occur. The successful crystallization of the enzyme from a strain of virus affecting bats allowed the structure to be solved. The structure shows how 16-18 bp of RNA interacts with the cap-binding domains and how the 3′ end of the RNA sits in the active site.

In a session on Emerging Techniques in Structural Biology, A. Florent (IBS) described a study of urate oxidase that gave fabulous insights into how the substrate binds as a peroxo-intermediate, although increasing the X-ray dose was shown to cause the bond to the oxygen to break. L. Duke (Diamond) described soft X-ray microscopy, which is being developed as a tool for ultra-structural studies. Individual cells can be imaged in fabulous detail by freezing in liquid ethane without any of the staining, drying and sectioning procedures which are common-place in the EM community. Gold particles are used as fiducials for the image analysis. A study of autophagy demonstrated the outstanding potential of this technique.

The meeting was closed by the BSG chairman, V. Fulop, who presented the poster prize to A. Yee (ILL/Keele) and thanked the local organizers (G. Leonard, T. Forsyth and E. Mitchell).