First School of Crystallization and Polymorphism 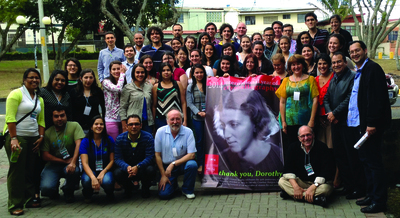 Participants at the first School of Crystallization and Polymorphism.

With the support of the IUCr, the First School of Crystallization and Polymorphism was held at the University of Costa Rica (UCR) in San José de Costa Rica, January 27-31, 2014. The school was organized by G. Madrigal (UCR) and A. Araya (UCR). The School attracted 52 participants from universities and companies from Costa Rica, Panama, Guatemala and Mexico. The international team of lecturers was composed of S. Cuffini (SC), U. Federal de São Paulo of Brazil, A. Moreno (AM), U. Nacional Autónoma de México, J. Bernstein (JB), Ben-Gurion U. (Israel) and NY U. (Abu Dhabi), and J. Manuel García-Ruiz (JMGR), U. de Granada (Spain).

The School opened with a presentation on the International Year of Crystallography and an overview of the importance of crystals in science, technology and art (JMGR). The second day covered the fundamentals of nucleation, crystal growth and crystal morphology (JMGR) and the basic aspects of polymorphism and case studies that illustrated the importance of crystal forms in the pharmaceutical industry (JB). The third day was devoted to the technical aspects of crystallization, including proteins (AM), polymorphs and co-crystals (SC), and to solid-state characterization techniques (SC). Thursday covered combined lectures and hands-on demonstrations of crystallization techniques (JMGR, AM), with lectures on the thermodynamics of polymorphism, enantiotropism and monotropism (JB). The last day of lectures was on the legal aspects of polymorphism (JB), methods of preparation of novel crystal forms and habits (SC) and (AM), and analysis of the experiments performed the previous day (AM, JMGR). The closing session featured a colloquium following the public screening of the movie 'The mystery of the giant crystals'.

This successful school, the first ever organized in Central America, was facilitated by the sponsorship of INIFAR, LABIOFAR, INBOX (PANalytical), the U. of Costa Rica and IUCr.