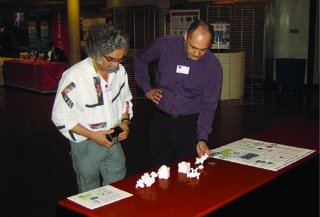 A collection of 3D printed models of molecules and cubic packing of spheres and crystals (Fig. 1) was displayed at the IYCr 2014 opening ceremony in Paris by P. Moeck, W. Kaminsky and D. Chateigner (International Advisory Board of the Crystallography Open Database, COD [1]), and T. J. Snyder (Trevor.snyder@3dsystems.com).

Figure 2: 3D printed models of (a) a myoglobin and (b) a caffeine molecule. Note that the representations of the nitrogen atoms (inside the rings), ketonic oxygen atoms and carbon atoms have distinctly different surfaces, and that the smaller size spheres represent hydrogen atoms in (b).

Models exhibited included back-bone representations of hemoglobin and whale sperm myoglobin (Fig. 2a); atomic (ball and stick) representations of herapathite, sucrose, buckminsterfullerene and caffeine (Fig. 2b); polyhedron models of sucrose and a Japanese α-quartz twin (Fig. 3a); as well as unit-cell representations of the cubic primitive, body-centered and face-centered packings of equal-sized spheres. The last was complemented by an 'opened up' piece with exposed intersites (Fig. 3b), intended for demonstrating structural prototypes, e.g. halite and fluorite, which are prototypical to copper with additional spheres of fitting sizes. All of these models had dimensions of several centimetres.

Figure 3: 3D printed models of (a) a Japanese α-quartz twin and (b) an 'opened up' unit-cell representation of the cubic densest packing of equally sized spheres that can be used to demonstrate derived structures by the filling of the various intersites.

One may infer from the observation that most of these models had 'evaporated' from the exhibition desk in Fig. 1 by the end of the meeting (and presumably 'condensed' into some briefcases and ladies' purses) that crystallographers see value in the 3D printing of the objects with which they are professionally concerned. This may entice the manufacturers and vendors of X-ray crystallography equipment and software to offer suitable 3D printers to crystallographers and the wider scientific community.

All of our crystallographic models were printed from *.stl files, i.e. the worldwide standard 3D printing format that was developed by 3D Systems. (The STL file format is also known as the Standard Tessellation Language.) Employing the freeware packages Cif2VRML and WinXMorph [3] developed by W. Kaminsky, the corresponding 3D printing files were created directly from *.cif files. Beginning at their 'educational COD offspring' website [4], the friendly people from the Crystallography Open Database will put 3D printing files of molecules and crystals into open access [5]. Other news from the COD [1] is that the Crystal Eye project [6] and the Crystallography Open Database have joined forces and there are now more than 260,000 entries in this database, of which more than 70,000 are Simplified Molecular-Input Line-Entry System (SMILES) compliant.

Selective Laser Sintering (SLS [7]) was used to print out the 3D models in Figs. 2b, 3a and 3b. The models that were semitransparent (e.g. Fig. 2a and arrow in Fig. 1) were made with the MultiJet Printing (MJP) technique. Color models can be made with the ColorJet Printing (CJP) technique. 3D crystallographic models and other parts can be ordered through 3D Systems Corporation's Quickparts Solutions for on-demand printing in the cloud [8]. Our mini-poster in Paris [2] also showed one of the newest 3D 'personal printers' called the Cube 3 [7], which utilizes the plastic jetting technique. This printer will be available for under $1,000 later this year.

The 3D printing technology used and the size of a crystallographic model will determine its production time and cost. In most cases, it may take a contemporary 3D printer from tens of minutes to tens of hours to complete a job. Models printed by the SLS, MJP and CJP techniques are of higher esthetic appeal and quality, but cost more compared with plastic jetting models from a Cube [7] printer. The price to 3D print today is as low as a few US dollars per crystallographic model, but can also be hundreds of US dollars when printed on an industrial high-end production machine. Prices will come down significantly as the technology develops and are only limited by the cost of the material (order of magnitude $1 per 50 gram). A Cube printer [7] will suffice for many needs of crystallographers.

The authors [9] are committed to further optimizing the printing of crystallographic models and are very happy to answer questions from the community.

[7] SLS and Cube are registered trademarks of 3D Systems Corporation

Peter Moeck and Werner Kaminsky (on behalf of the International Advisory Board of the COD) and Trevor J. Snyder (on behalf of 3D Systems Corporation)