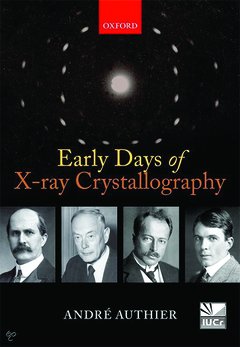 Over many years of teaching first year chemistry I found myself with increasing frequency introducing a subject with the question, 'How do we know that?' This marvelously eclectic book provides an almost encyclopedic source of how we know what we know about the structures and properties of crystals, and Andre Authier tells it in an intellectually and scientifically rigorous and constantly entertaining way. Whoever said that history - or this history of science - is boring and dry would be converted by this account.

Virtually every introduction to crystallography or the history of crystallography recounts the extraordinary number of Nobel prizes awarded to crystallographers and the variety of research endeavors to which they applied crystallographic techniques. But the history of crystallography can be traced, as Authier does, to the Greeks. However, in an historical trump Authier begins the book in 1912. As in many classic movies he sets the stage by opening Chapter 1 with a description of  the 'defining moment' - the April 1912 discovery of the diffraction of X-rays by crystals. And in the tradition of those cinematographic magicians (artisans) he then paints the picture of the state of crystallography on the eve of the discovery, and a brief account of the subsequent impact in such a wide variety of fields. The rich early history is not neglected, but rather artfully detailed when we come full circle to the final two chapters (11 and 12) appropriately titled, 'Unravelling the mystery of crystals - the forerunners' and 'The birth and rise of the space-lattice concept'.

Authier's Preface points out the exigencies or writing about the history of science - the advantage, or disadvantage, of hindsight - and the difficulty of placing oneself at the time, place and general level of knowledge and understanding of those who made the discoveries and developments that now fit so well into the overall scheme of things.

The diffraction of X-rays by crystals is the interaction of light (electromagnetic radiation) with lattices, so the stage is then set to embark on the detailed scientific and historical developments that led (inexorably?) to the 1912 discovery.

Chapter 2 is devoted to the development of the concept of the lattice, and naturally Chapter 3, appropriately titled 'The dual nature of light', is concerned with the nature of light, ending very appropriately with Einstein's explanation of the photoelectric effect as being due to the particle nature of electromagnetic radiation.

As an advocate of the role of serendipity in science I was intrigued by Authier's description of Roentgen's discovery of X-rays:

'It is sometimes written that the discovery of X-rays was made fortuitously. It was not. What was fortuitous about it was the way Roentgen noticed the faint glimmer on the barium platinocyanide screen; he would have found X-rays eventually in any case.'

Biographical sketches for major players and footnotes for many others, personal accounts, title pages from original papers, and notebook entries, make the whole story come alive. And Authier enhances that personal approach and intimacy, for instance by often referring to Sir Lawrence Bragg as 'Willie'.

Roentgen mailed the first X-ray photos to 90(!) leading physicists on New Year's Day 1896. The detail of the description of how rapidly the word spread even in those days leaves one breathless with excitement. The chapter concludes with many other accounts of Roentgen's predecessors who apparently had produced X-rays, but lacking his experience, curiosity and passion failed to recognize the discovery.

In Chapter 5, Thomson's 'discovery' of the electron is put into proper perspective, in addition to providing a vivid account of the continuing confusion, competition and controversy, as well as the intellectual discourse among the contemporary physicists about the nature and behavior of light, waves and particles.

Chapter 6 returns to Munich and the discovery of the diffraction of X-rays by crystals, again detailing the human aspect (e.g. a picture of the Hofgarden in Munich 1912). The description of one of my heroes, P. Groth - whose monumental five volume compilation Chemische Kristallographie was obsolete by the time publication was completed in 1919 - creates a vivid picture of the physical, cultural and intellectual atmosphere in Munich in 1912 at the dawn of crystallography. In response to Ewald's request, Groth could call upon his encyclopedic knowledge of crystals to suggest testing Ewald's theory of refraction and reflection on CaSO4.

Authier definitely has a talent for distilling the most poignant biographical details to tell his story. In Chapter 6 one almost feels like he is following the players from locale to locale as the story of the discovery unfolds. Valuable documented timelines provide a concise record of what happened when, again so future chroniclers are saved the drudgery of these compilations. He also provides convincing evidence that major discoveries are not made in an intellectual vacuum but almost always made when and where there is a critical mass of human and physical resources, as related in the critical review of the Forman-Ewald controversy on this issue (Section 6.12). He sums it up beautifully:

Finally, concerning the 'clan of crystallographers', it is certainly true that there is a tightly bound community of crystallographers. What keeps them together is not the occasions to celebrate a 'myth of origins', and neither is it a common technique. The inner structure of a material, ordered or not, its imperfections, at the nanoscopic, microscopic or macroscopic scales, are directly related with its physical, chemical, mineralogical or biological properties. The common goal of unraveling these structures or their defects by a large variety of techniques, and understanding their relations to the properties of materials, is what keeps the crystallographers together.

And this book will strengthen the commitment and spirit of that community. It should be compulsory reading for anyone who ever deals with the interactions of X-rays and solid matter.

Chapter 7 is an account of the events of 1913, including Bragg's solution of the crystal structure of NaCl and diamond, and conveys the rush of activity and very significant achievements, many of which confirmed earlier theories (i.e. the tetrahedral carbon atom) or the ionic nature of rock salt. As Bragg later described it,

'It was like discovering an alluvial gold field with nuggets lying around waiting to be picked up' (Bragg 1943).

And Authier takes the reader on an exciting, oft breathtaking, tour of that alluvial field. His command of the science allows him to present the essence of the developments and put them into appropriate historical perspective. He presents not just the accomplishments, but  the interpersonal dynamics of the crucial catalytic meetings of the day. In one remarkable year the following developments (among others!) took place: the first experiments in reflection geometry, the equivalence of the Bragg and Laue derivations, X-ray ionization spectrometer, the first structure determinations by the Braggs, Moseley's high-frequency spectra of the elements (which finalized the order for the periodic table), Debye's development of the temperature factor, the rotating crystal method and Friedel's rule. The chapter ends with the awarding of the Nobel Prizes to von Laue in 1914 and the Braggs in 1915, with an accounting of the complications and delays due to the outbreak of World War I in August of 1914.

Chapter 9 covers the optical properties of X-rays from Ewald in 1917 through Compton to Borrman (anomalous dispersion) in 1941. Chapter 10 is titled 'Early Applications of X-ray Crystallography', summarizing important contributions and emphasizing the almost ubiquitous - and often crucial - role crystallography has played in every branch of science. It includes a fascinating discussion of the development of definitions and accepted values of atomic and ionic radii, as well as poignant examples from chemistry (inorganic and organic), metallurgy, crystal imperfections and metal physics, mineralogy, materials science (crystal engineering), structure-property relations, biological sciences and X-ray spectroscopy.

Chapter 11 returns to the early history with more revelations - back to the beginning: 'Unraveling the mystery of crystals - the forerunners'. It will be of special interest to non-crystallographers, or those crystallographers who wish to educate the public about the beauty and fascination of our science, going back to the Greeks through to Rome de l'Isle's 1783 determination of the constancy of interfacial angles.

Since I received the book it has provided many hours of delightful reading, browsing and reminiscing, and has already served me well as a sourcebook for writing and lecturing. It documents a rich history and tradition of which all crystallographers should be proud, and it should enjoy a cherished place on the bookshelf of anyone with an interest in science, history and the human role in creating the two.

Joel Bernstein
Other reviews of Authier's book can be found in the Spring 2014 issue of RefleXions, written by Joe Ferrera, and in Acta Cryst., written by John Helliwell.