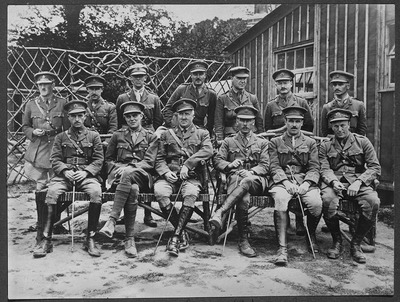 After his successes in solving several important crystal structures together with his father during 1913–1914, all research work ended with the outbreak of war. Bragg was commissioned as a Second Lieutenant in the Leicestershire Royal Horse Artillery in August 1914. One year later, he received a letter from the War Office instructing him to report to Colonel Walter Coote Hedley of the Royal Engineers. Hedley told him that the French had begun experiments to determine the location of the enemy guns by measurements based on sound waves (sound ranging), and proposed that he should go to France to head a unit to develop this method. He was assigned a young officer, Harold Robinson, a physicist who had worked with Rutherford in Manchester, and who was at the time serving in a coastal defence battery. They were sent to report to General Headquarters in France to meet Lieutenant Colonel Ewan Maclean Jack, who was in charge of the Field Survey sections. Later, these sections included Sound Ranging and Flash Spotting units (determination of the enemy gun positions by sighting their flashes).

Jack then sent them to the Vosges mountains to join up with a group of Sound Rangers. This section used a recording apparatus designed by Lucien Bull, a French physicist of Irish descent who was an expert on electrocardiography. This apparatus, built at the Institut Marey in Paris, consisted of a string galvanometer, where a fine string runs between the poles of a magnet. When an electrical current runs through the wire it is moved in the magnetic field, and the shadow of the wire is then recorded on a moving strip of photographic film. Bull’s apparatus had six strings attached to six microphones so that the time differences from receiving the gun report could be recorded.

It was during this time that Bragg heard from Colonel Jack that his brother, Bob, had died of wounds during the 1915 Gallipoli campaign (the clever young physicist Henry Moseley, who had discovered the relationship between X-ray energy and atomic number, was also killed there in 1915). Bragg was sent to Paris to collect a recording set and he set up the first sound-ranging station at Kemmel Hill just south of Ypres. Six microphones were placed about one mile behind the front with the recorder in a small village called La Clytte. It was here in November 1915 that he heard by telegram that he and his father had been jointly awarded the Nobel Prize in Physics. Bragg recalled that the friendly priest, in whose house they were billeted, brought up a bottle of Lachrimae Christi from the cellar to celebrate the occasion.

The early sound-ranging experiments were disappointing and their results of little value. The problem was with the microphones, which were unsuitable to pick up the gun sounds. When a high-velocity gun fires a shell with an initial velocity greater than that of sound, the shell creates a wake or 'shell wave', which is heard as a loud crack. This crack is far more intense than the low-toned 'wuff' which is the true gun report, and on which the sound-ranging measurements had to be made. Their microphones, of a type used for long-distance telephony, were far more sensitive to the shell wave than to the gun report, which tended to be completely obscured by the loud crack. They were also sensitive to rifle fire, traffic noises, general battle sounds, swearing by the troops and dogs barking.

The problem was solved a year later, when Bragg was sitting on the privy in a hut which had an opening to the outside: when a nearby British gun fired, his bottom was lifted off the seat, even though he had heard nothing. He realized that the gun wave created a pressure spike and that this could be used to detect it. Bragg teamed up then with Corporal William Tucker, who had studied physics in London. Tucker knew that the pressure change could be detected by recording the change in electrical resistance of a hot platinum wire: the cooling puff of air caused by the pressure change increases its resistance.

They then rigged up a crude microphone (later called the Tucker microphone) based on this idea using an ammunitions box inside which the wire was stretched across and which had a small opening to allow air to enter. They immediately saw that the wire reacted to the gun report and ignored the shell wave.

The method of location was both ingenious and simple (see the figure), typical of Bragg's approach. The gun at A fires and creates a gun wave that eventually arrives at microphone B. After this it reaches C and then D. Now, by knowing the velocity of sound under the air conditions of the time (one way was to carry out actual measurements with known cannon fire), circles can be drawn around C and D corresponding to the time differences from B. This allows the gun wave circle through B to be constructed, and then lines drawn back from C and D locate the gun.

The system was finally deployed in earnest at the front using about 40 miles of low-resistance insulated wire between the microphones, although they were exposed to destruction by enemy fire but more importantly to pilfering, especially by Australian troops!

So successful was sound ranging using this method that it seriously affected the ability of the German guns to operate. Perhaps the most spectacular success was had at the Vimy Ridge where German guns were firing at Canadian troops from the shelter of woods. Looking back at Bragg's sound-ranging work, we can see that he and his team had played a significant part in shortening the war and bringing it to an end in 1918. Interestingly, the same method was used in World War II. However, in the interwar years, the system had been 'improved' by adding several technical advances. Much to Bragg's delight, it was found that this actually degraded the performance of the simple Tucker system and in the end they had to revert to his earlier design.

More details can be found at http://rsnr.royalsocietypublishing.org/content/59/3/273.full and in the book Crystal Clear: the Autobiographies of Sir Lawrence and Lady Bragg by Mike Glazer and Patience Thomson, to be published this summer by Oxford University Press.