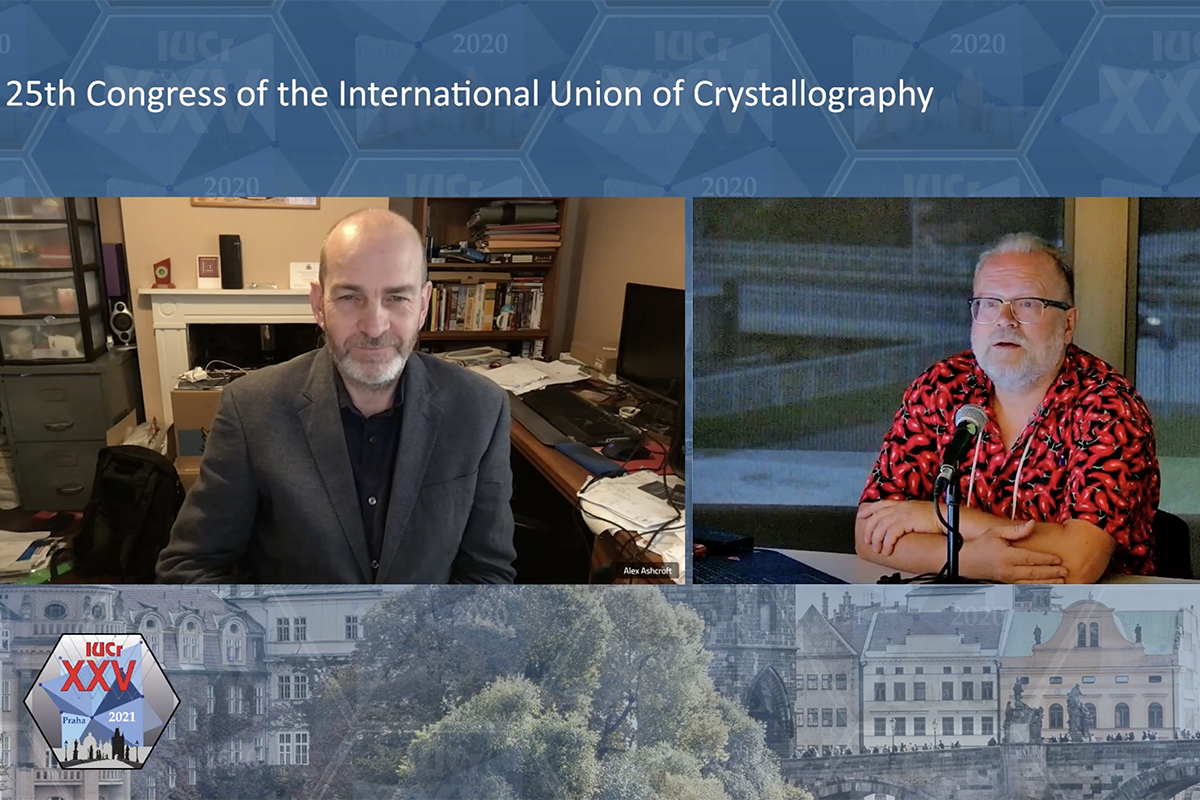 The 25th Congress and General Assembly of the IUCr was a voyage into the unknown for all of us. In the entire history of the IUCr, there had never previously been a hybrid meeting, or a quadrennium, for that matter. The 1989 General Assembly is listed as “Extraordinary”, as it was held in addition to the scheduled meetings. While the Prague Congress was scheduled (albeit for a year earlier), this meeting was also “extraordinary” in a very different way. The organisation of the Congress was done by Radek Kužel and his team, and I thought they did an excellent job under extraordinarily difficult circumstances. My only involvement was in the General Assembly: three short sessions with fewer than 100 delegates, in comparison with a full week with a whole order of magnitude more participants. The level of commitment and attention to detail from Radek and his team, over a much longer period than usual – preparing for a meeting in 2020, then one in 2021, with the uncertainty as to whether it could be physical, virtual-only or hybrid – was remarkable.

Preparation for the General Assembly (as with the Congress) was made more complicated as many of us didn’t know until about a week before it was due to happen whether we would be able to attend in person or not. Outgoing IUCr President Sven Lidin only received permission to travel from his University at around the same time that it became clear that Czech immigration would not allow UK citizens to enter the country, which made it impossible for me to travel. Many national committee delegates faced the same uncertainties, while Radek had to make guesses about room sizes, catering and who would be able to present in person.

With delegates from many countries unable to travel, and a statutory requirement for secret balloting, a new voting system had to be used. I had taken advice from the International Science Council, and from other International Scientific Unions, who had suggested the “Simply Voting” software, and I was very grateful to members of the Executive Committee (EC), Chester staff and my family who participated in various test votes while I got used to the interface, we satisfied ourselves that it would be secure and easy to use, and we worked out what the limitations of the software would be. From discussions with the EC, it was clear that the priority was that the voting procedure we used would conform to the IUCr’s rules and that the same people would be elected as would have been elected had all the delegates been in a room together and following the usual processes. It was also crucial that everyone who was entitled to vote should have the opportunity to do so, irrespective of the time difference between Prague and their location. The downside of this was that it stretched the voting period out over a number of days rather than hours, which caused inconvenience to the delegates and prolonged suspense for the candidates. I want to take this opportunity to thank all the delegates for continuing to participate through their weekend and, in many cases, travelling days, and to thank the candidates for their patience and good grace throughout the process. I would also like to thank the Tellers: Kari Rissanen from Finland and Eduardo Granado from Brazil, for their help with the process and ensuring that the procedures we were using were fair.

It was a very strange experience participating in the General Assembly sessions from home. It would have been lovely to have had the chance to finally meet some of the many people I have had email contact with over the last four years, and to catch up with EC and Finance Committee members, and some of the people I enjoyed meeting in Hyderabad. Despite the lack of physical contact, there was still a very strong feeling of community during the sessions. I could communicate with outgoing General Secretary Luc Van Meervelt via the Congress software chat channel, I had a WhatsApp chat with incoming Vice-President Santiago García-Granda and outgoing IUCr President Sven Lidin on my phone, which was very useful for sharing information, and I received numerous extremely helpful emails during the General Assembly sessions from delegates who brought things to my attention that I could pass on to Sven via Santiago. With roll-call and test votes on the first two sessions and the official balloting in the third, it was a busy time for the delegates and the organisers. The part of Chester where I live suffered a brief power cut less than 10 minutes into the second General Assembly session that caused a brief spike in my stress levels until it was clear that my Mac and broadband router had both re-booted without problems!

I was very relieved that the voting went smoothly, and that the delegates were very tolerant of both the intrusion into their time that voting required and of my pestering emails reminding them to vote. I am looking forward to working with the new President, Hanna Dabkowska; the new Vice-President, Santiago; the new General Secretary and Treasurer, Bo Brummerstedt Iversen; and the newly elected EC members: Thomas Proffen, Angela Altomare and Manfred Weiss. It would have been nice to shake the hands of the outgoing EC members, with whom it has been such a pleasure to work over the past four years, though. I hope I will get to see them all again in Melbourne, but to Luc, Radek, Marvin Hackert and Wulf Depmeier (as well as the continuing EC members) – thank you for making my job so enjoyable over the past four years. The 25th General Assembly was very different, and very stimulating, but I hope the 26th will be more traditional.