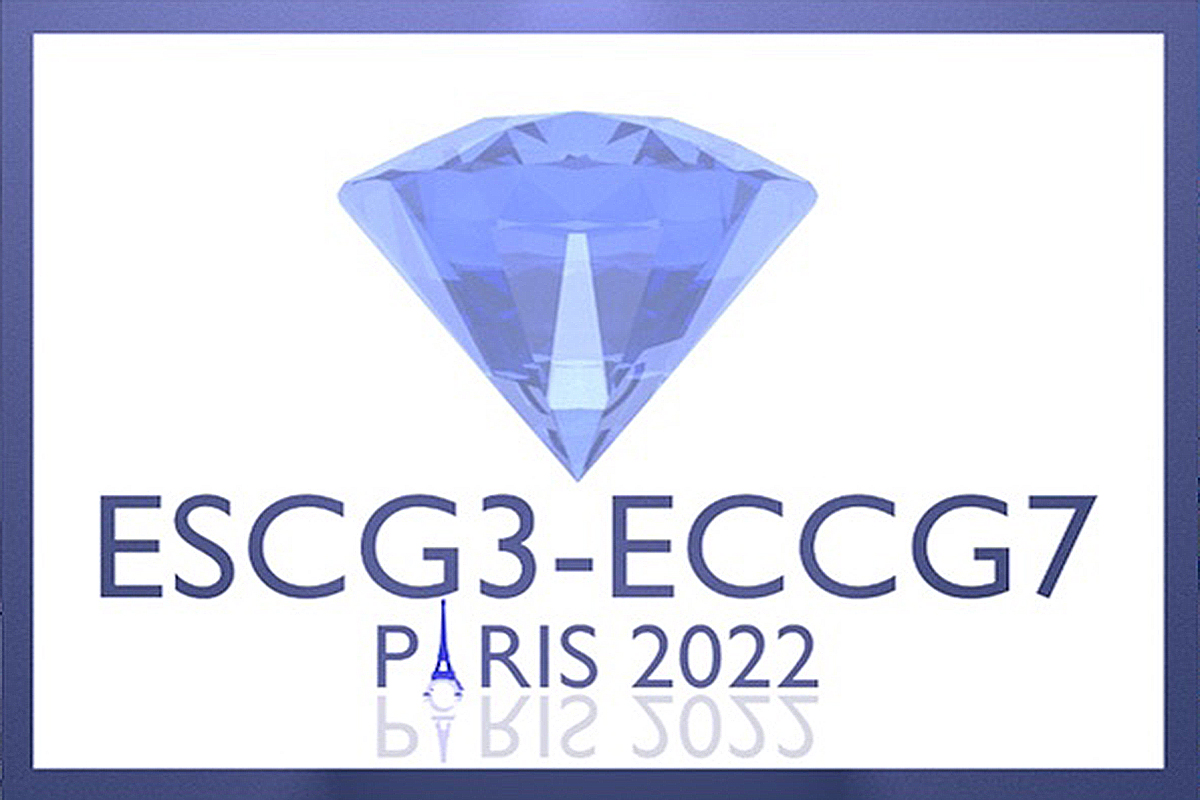 Four years ago in Varna, Bulgaria (ESCG2-ECCG6), the ENCG Council had come up with several specifications for the organization of the third edition of ESCG. Firstly, the school should last four days including a Saturday to broaden its scope and save participants travel expenses between the school and the conference. Secondly, all participants should be housed at the same location for both ESCG3 and ECCG7. Thirdly, there should be discussion time between participants and lecturers. Fourthly, there should be practical demonstrations on real growth reactors and crystal pulling machines. This last demand originated from the students participating in ESCG2. While the first specification was not difficult to satisfy, the second one turned out to be a real puzzle for the organizers. In the end, only one quarter of the participants were housed at FIAP Jean Monnet, an ESCG3 venue 25-min walk from the international student center. The third specification was of course met by leaving enough time for discussion at the end of each lecture but was also satisfied by having long lunch breaks with the lecturers in the restaurants of the Quartier Latin district.

ESCG3 gathered 41 participants, of which 32 also attended ECCG7, and 12 lecturers (Fig. 1), mostly coming from Europe [Belgium (1), France (10), Germany (9), Italy (3), Netherlands (5), Poland (3), Romania (1), Spain (1), Switzerland (1), UK (1)] but also from Kazakhstan (1), South Korea (3), Thailand (1) and USA (1). Of the participants, 31 were either PhD students or post-doctoral researchers. Fourteen young scientists were awarded an IUCr grant to attend the school. The lectures took place in a completely refurbished and upgraded (and air-cooled) amphitheater, just the day after a heatwave had hit Paris, which meant the participants could enjoy an 8 °C temperature drop upon starting the school.

The international pedagogical committee worked out a broad four-day-long program (19 hours of lectures, Fig. 2), from theoretical physics of crystal growth to experimental biological crystallization, from nucleation to bulk crystal growth. All space and time scales of crystal growth phenomena were covered, in some way or another, experimentally and theoretically, not forgetting the modelling and numerical simulation approaches. Furthermore, small single crystals, bulk single crystals, eutectic composite materials, thin films and heterostructures … virtually all shapings were addressed. Cutting-edge in situ synchrotron X-ray radio- and topography techniques, which permit solidification interface morphological instabilities, dislocation formation and mobility, and dendrite formation to be followed ahead of the solidification interface, were also introduced. Thin-film characterizations that are closely related to their growth conditions and mechanisms were brilliantly exposed. An advanced introduction to nucleation, both classical and under microfluidic conditions, was delivered.

Figure 2. A broad review and lecture on crystal growth methods being delivered in the renovated Henri Moissan amphitheater (ENSCP-School of Chemistry of Paris).

In addition, laboratory visits and practical demonstrations on real pulling machines were organized (Figs. 3 and 4). The participants were distributed in eight groups in order to attend alternatively a total of six practical demonstrations (leading to a total amount of three hours for a given group) over three days. These practical demonstrations, on real pulling or deposition machines, including Czochralski growth, high-temperature solution growth, optical floating-zone growth, chemical vapor deposition (CVD), high-throughput membrane protein and cubic phase crystallization platforms, counterdiffusion/capillary and dialysis protein crystallization, were much appreciated by everyone, as the final roundtable discussion revealed. The commitment of the lecturers and practical demonstration chairs was total, and the participants were able to get all the lecture files, some simulation programs, many didactic videos and important textbooks at the end of the school.

For this seventh edition of ECCG, following the recommendations of the ENCG council and in synergy with both the international scientific and the program committees, the organizers had to implement a scientific program with a broader scope. Consequently, 14 sessions, 3 parallel sessions and double the number of plenary lectures were implemented. A particular effort was made to substantially increase the participation of early-career scientists in session invited lectures, oral communications and poster communications. Seven awards publicized worldwide were delivered. Moreover, the organizers publicly endorsed the IUCr GEDC Code of Conduct, which — among other things – requested that attention should be paid to gender balance and affiliation country balance in all organization and scientific aspects of the conference. Hence, a few days before the events started, the organizers published on the ESCG3–ECCG7 website detailed statistics about gender balance and affiliation country in ECCG7 international scientific and program committees composition, ESCG3 international pedagogical committee composition, ESCG3 lecturers list, ECCG7 session chairs composition, invited lectures (both plenary and session), oral communications and so on. Five of the 24 session invited lectures, as well as 32 of the 77 oral communications and 57% of the poster presentations were delivered by early-career scientists. Seventeen young scientists were awarded an IUCr grant to attend the conference, among which 13 had attended the school too (Fig. 5). Of the 17 IUCr grant awardees, 10 were women, and if we add ECCG6 and ECCG7 best poster and best oral communication awards, a total number of 5 women awarded over 11 prizes is reached. 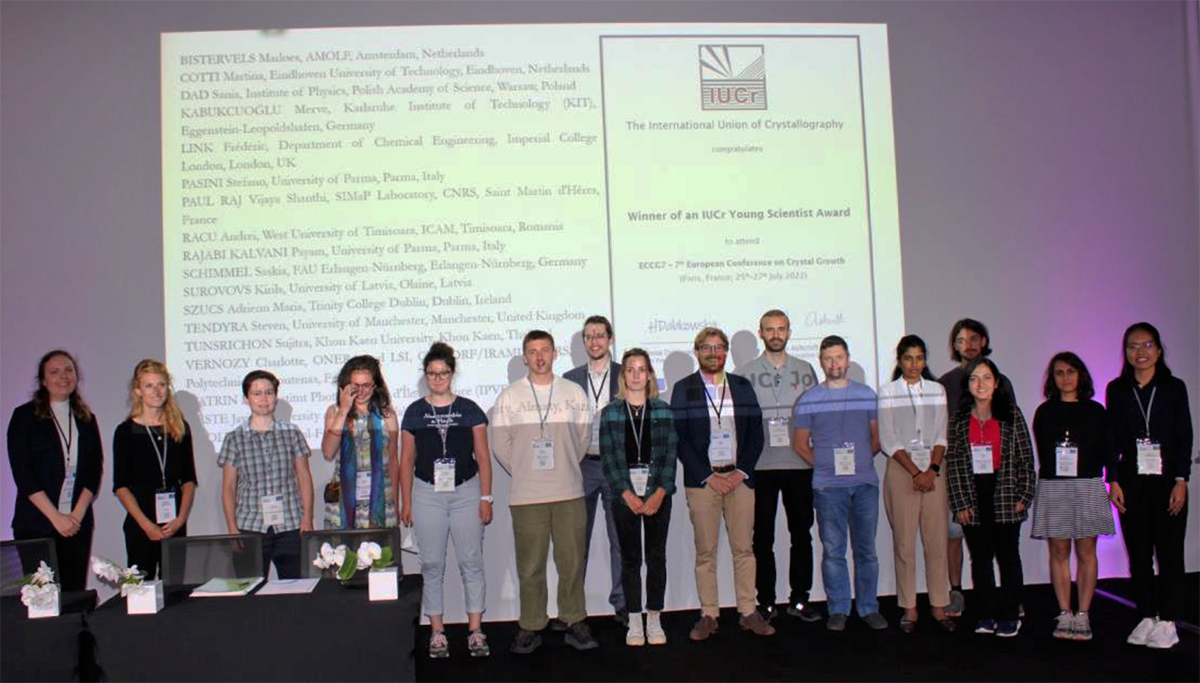 During the ECCG7 welcome address, Andrea Zappettini, the active ENCG coordinator, made an ENCG statement to condemn the war in Ukraine, and express ENCG solidarity with colleagues from the countries involved in the war and suffering from its consequences.

The ECCG7 gathered 223 participants (Fig. 6) from 34 countries around the world but with a main (quantitative) contribution from France, Germany, Poland, UK, Italy, the Netherlands and Switzerland.

A total of 206 abstracts were submitted from 32 countries around the world with main (quantitative) contributions from France, Germany, Poland, Italy, USA, the Netherlands, Switzerland and UK. The most popular sessions in terms of abstract submissions were Fundamentals of Nucleation and Crystal Growth & Digitization in Crystal Growth; Surfaces, Interfaces, Epitaxial Growth & Growth at the Nanoscale (dedicated to the memory of Ivan V. Markov 1941–2022); Semiconductors; Optical Crystals; and Functional Crystals. The smaller Mineral Growth Processes session proved to be particularly vivid and outstanding, and the Crystallization of Organic Materials & Industrial Crystallization Process Engineering and Crystallization of Biological Molecules and/or in Biological Systems sessions also attracted a significant audience for the first time during an ECCG event. The program contained four invited plenary lectures, which were chosen according to the topical coverage of the conference, gender balance and affiliation country. All of them were absolutely brilliant and triggered interesting discussions. The first one, entitled Step-growth, impurities and mass transport: the surprising complexities revealed by simulation, introduced the full session on Fundamentals of Nucleation and Crystal Growth, and was delivered by James F. Lutsko (Université Libre de Bruxelles, Belgium). The second one, entitled Can the crystal structures of pharmaceuticals be predicted?, closely related to the session on Crystallization of Organic Materials & Industrial Crystallization Process Engineering, was delivered by Sarah (Sally) L. Price (FRS) (University College London, UK). The third one, entitled Recent advances in protein crystal growth, introduced the session on Crystallization of Biological Molecules and/or in Biological Systems, and was delivered by Simona Fermani (University of Bologna, Italy). The fourth one, entitled The physical chemistry of oxide molecular beam epitaxy, introduced the session on Surfaces, Interfaces, Epitaxial Growth, Thin Films & Growth at the Nanoscale, and was delivered by Oliver Bierwagen (Paul Drude Institute for Solid State Electronics, Berlin, Germany). In addition to these, 24 invited session lectures, 77 oral communications and 92 poster presentations distributed among the 14 session topics were delivered.

On 26 July, the participants enjoyed a gala dinner on the Seine riverboat Le Jean-Bruel. The weather and temperature were just perfect for a nice summer evening cruising past most of the well-known Paris monuments.