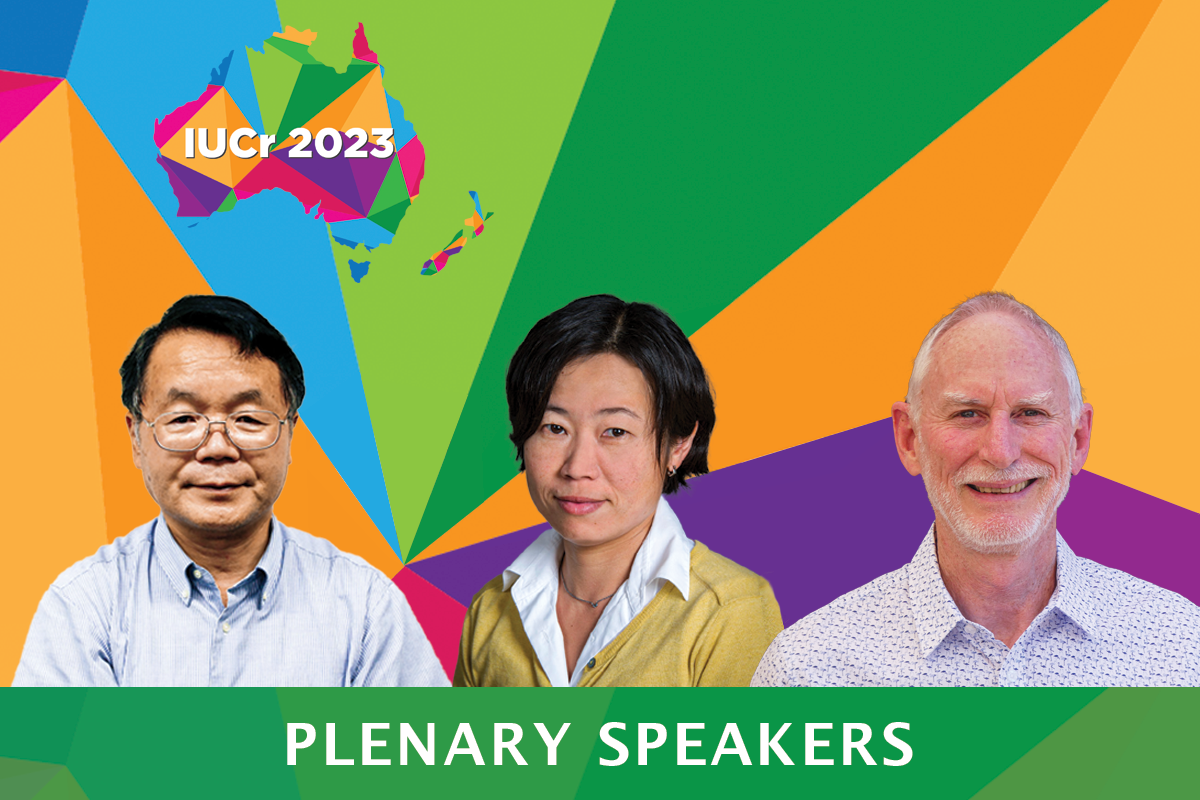 We are thrilled to announce that three world-leading experts in their field will headline IUCr 2023 in Melbourne: Professor Hideo Hosono from the Tokyo Institute of Technology, Japan; Dr Junko Yano from Lawrence Berkeley National Laboratory, CA, USA; and Professor Mark Spackman from the University of Western Australia, Perth, Australia.

Professor Hosono is renowned for his work on the creation of novel functional materials. Some of Hideo’s noteworthy achievements include the design of transparent oxide semiconductors such as indium gallium zinc oxide (IGZO) and their thin-film-transistor (TFT) applications for state-of-the-art displays (OLED TVs are driven by IGZO-TFTs), creation of room-temperature stable electrides and their application to catalysts for ammonia synthesis, and discovery of high-Tc iron-based superconductors. Hideo is an honorary and professor of Tokyo Institute of Technology and a group leader and distinguished fellow at the International Center for Materials Nanoarchitectonics (MANA) of the National Institute for Materials Science. He received a PhD in Applied Chemistry from Tokyo Metropolitan University in 1982, and became a professor of Tokyo Institute of Technology in 1999 via the Nagoya Institute of Technology and Institute for Molecular Science at Okazaki. He is a recipient of various honors including the Japan Prize, von Hippel Prize (MRS), J. McGroddy Prize (APS), Jan Raychman Prize (SID), Imperial Prize of the Japan Academy, Thomson Reuter Citation Laureate and a foreign fellow of the Royal Society.

Dr Yano’s research has focused on problems of importance to energy, especially renewable energy sources. Her group uses X-ray spectroscopy and crystallography to understand biological and inorganic systems. For example, her lab has explored how in photosynthesis, plants use light to split water using a catalytic Mn4Ca cluster, and converting light energy into chemical energy. Since the advent of X-ray free-electron lasers (XFELs), her group has been using these facilities to study the catalytic systems, under functional conditions at room temperature. These methods allow one to study structure–function relationships by following the reactions in real time and the effect of the environment of the protein on the active site. Junko is a member of the Liquid Sunlight Alliance (LiSA), where she studies artificial photosynthetic systems, combining her interests in natural photosynthesis/metalloenzymes with inorganic systems that can be used to engineer practical devices. Since 2015, Junko has held the position of Senior Scientist, and Division Deputy for Science (since 2020) in the Molecular Biophysics and Integrated Bioimaging Division at the Lawrence Berkeley National Laboratory, CA, USA.

Emeritus Professor Spackman is well known around the world for his development of tools and methods from computational chemistry to inform aspects of modern crystallography, especially intermolecular interactions and crystal packing. These research tools have been implemented in the CrystalExplorer software package, now used by thousands of students and researchers worldwide. Mark is an emeritus professor at the University of Western Australia (UWA) in Perth, where he received his PhD in 1980. Following postdoctoral stints with R. F. Stewart (Pittsburgh), E. N. Maslen (Perth) and B. M. Craven (Pittsburgh), and an academic appointment at the University of New England (NSW, Australia), he returned to UWA in 2004. In 2013 he was a joint recipient with Carlo Gatti (Milan) of the Gregori Aminoff Prize for Crystallography by the Royal Swedish Academy of Sciences and was awarded the Lawrence Bragg Medal of the Society of Crystallographers in Australia and New Zealand in 2017.

The confirmation of the three plenary speakers and a strong scientific program are sure to elevate IUCr 2023 to new heights.

With abstracts already being received, it is clear that IUCr 2023 will be the premier destination for researchers and industry partners in 2023.

The scientific work of the IUCr is conducted primarily through its Commissions. There are 22 individual Commissions and Committees that comprise groups of scientists representing the key areas of crystallography sciences including the following:

It is the strong desire of the organising committee to create an inclusive culture and diverse environment at IUCr 2023, which we believe starts with the formation of the academic program, and representatives from each of the Commissions above participated in the IUCr 2023 International Program Committee meeting in April 2022. We encourage you all to submit an abstract, share your knowledge and collaborate with the global crystallography community.

The Call for Abstracts is currently open until 21 November 2022, with early bird registration available up to 15 February 2023.

It was our privilege to be at ACA2022, the 72nd Annual Meeting of the American Crystallographic Association in Portland, OR, USA, the first face-to-face ACA meeting since the pandemic. The excitement and appetite for an IUCr Congress in Australia was palpable. We met over 500 crystallography friends, many of whom were first-time attendees and many of whom were just grateful for the opportunity to reunite. Daily prize draws were conducted, with the final draw being a complimentary registration to IUCr 2023. This ultimate prize was awarded to Samantha Hartanto from the University of California Davis. Thank you to the ACA for hosting us in Portland; what a fantastic city and what a terrific event.

IUCr 2023 also felt very welcome at the 33rd European Crystallographic Meeting (ECM33) in Versailles, France, and we sincerely appreciate the efforts of the organisers. We had a wonderful and productive time. The start of ECM33 was directly aligned with the launch of the IUCr 2023 Call for abstracts announcement. Our team met over 350 attendees from across Europe and for one of them, the meeting proved extra worthwhile. Congratulations go to Jake Weatherston from Newcastle University, UK, the winner of the complimentary registration to IUCr 2023. The IUCr 2023 stand was enthusiastically depleted of all ‘I love Melbourne’ koalas, Melbourne-inspired keep-cups and the rare packets of Tim Tams.

The next stop for the Melbourne team will be the 17th International Conference of the Asian Crystallographic Association in Jeju, Korea.

Industry support is strong as diamonds

Since our last communication, Rigaku has been confirmed as a Diamond Sponsor for the Melbourne Congress in 2023, joining Bruker and Eldico. There will be many ways for our sponsors and exhibitors to connect with the IUCr community. Our focus is on elevating the delegate experience through the sponsorship of our wellness zones, childcare programs, juice bars and – of course – coffee carts!

The Congress team has been busily investigating a range of accommodation choices, from the best hotel facilities to backpacker hostels, with guaranteed room blocks for our IUCr delegates, including students and families.

If you have never been to Australia, it is worthwhile knowing that we have no added taxation at the point of sale. The advertised price is the final price you will pay. We also don’t have bed tax here! You can book directly via the website at any time. Alternatively, reach out to our accommodation team if you have an enquiry. Australia’s tax-free shopping is called the Tourist Refund Scheme (TRS), which allows overseas visitors and Australian residents to claim a refund of the Goods and Services Tax (GST), so save your receipts and claim at the airport upon departure.