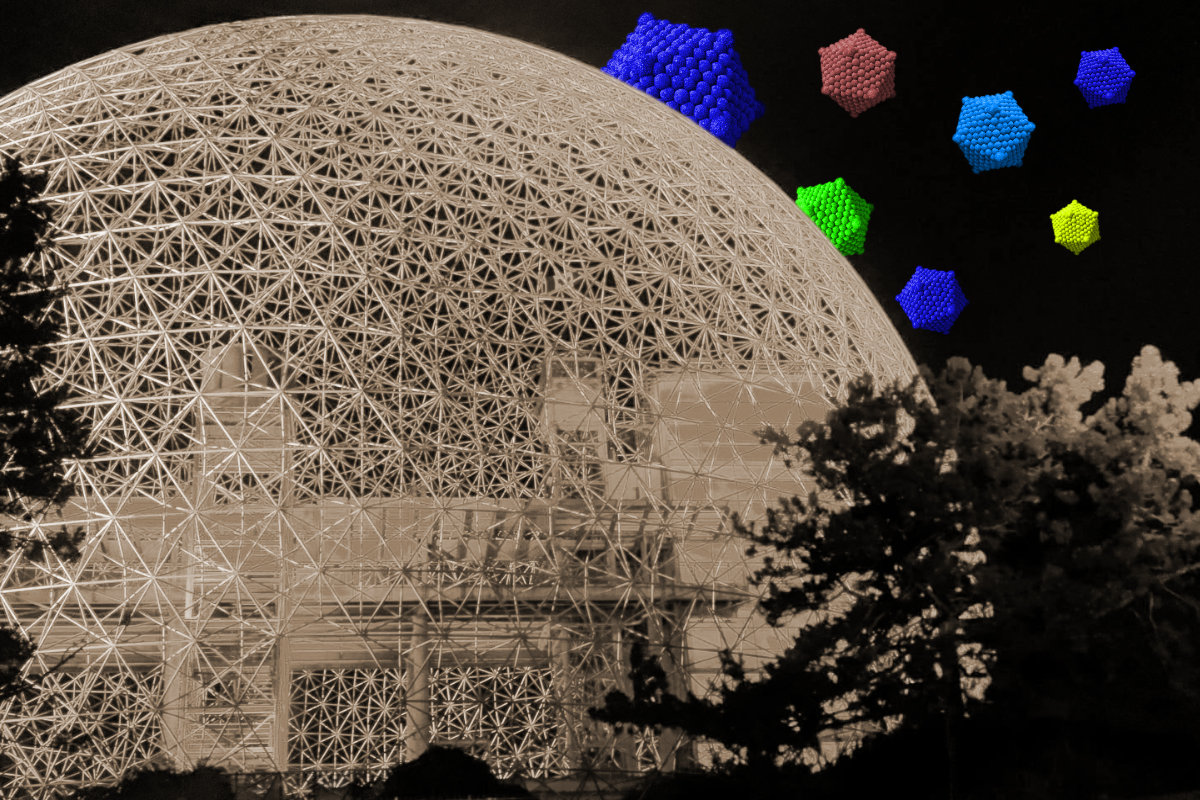 Donald L. D. Caspar (1928–2021), a pioneer in understanding virus structures, passed away recently [1]. In this note, we talk about his cooperation with Aaron Klug (1926–2018). We also mention the influence of the geodesic dome, designed by R. Buckminster Fuller (1895–1983), on the research of virus structures. In conclusion, we quote excerpts from our 1996 conversation with Caspar. 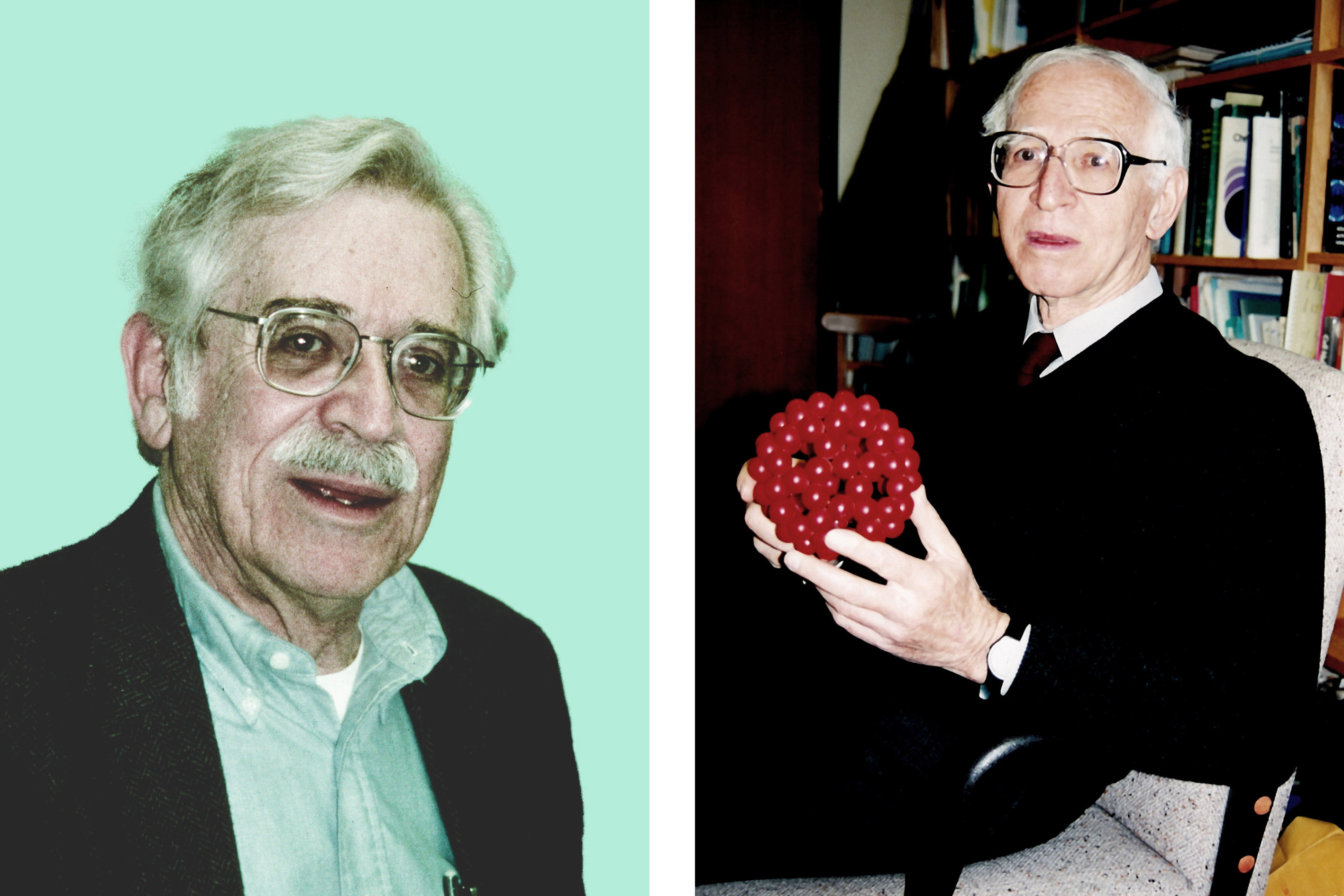 Caspar was born in Ithaca, NY, USA. Already at the age of 10, he became acquainted with interesting science. Through his chemistry graduate student father, he met the renowned crystallographer Isidor Fankuchen, who told him about the tobacco mosaic virus (TMV). Caspar studied at Cornell University (BA in physics, 1950) and at Yale University (PhD in biophysics, 1955). His dissertation was on the radial structure of TMV. At Yale, the research was focused on radiation biology, and biological structures were investigated by destroying them with X-rays, protons and deuterons. However, he thought that using X-ray scattering may be more instructive, and he carried out small-angle X-ray diffraction on TMV. He produced the second isomorphous derivative of a biological structure after the isomorphous derivative of hemoglobin by Max Perutz [2].

In 1954, Caspar moved to the California Institute of Technology (Caltech). Formally, he was in Max Delbrück's laboratory but was involved mostly in X-ray crystallography with Linus Pauling. Caspar used to build models of nucleic acids and viruses with James D. Watson. Eventually, he joined the Children's Cancer Foundation at Harvard Medical School, where he built models of icosahedral viruses. He went to Cambridge, UK, in 1955.

It was about this time that Aaron Klug met Buckminster Fuller, who visited Birkbeck College of London University. Klug was also interested in virus structures and recognized that there was some relationship between Fuller's work on geodesic domes and virus structures. Klug was born in Lithuania, and his family moved to South Africa when he was two years old. He studied at the University of Witwatersrand in Johannesburg and at the University of Cape Town. He continued in Cambridge and earned his doctorate in 1952. He was at Birkbeck College between 1954 and 1961, and at the Medical Research Council (MRC) Laboratory of Molecular Biology from 1962 for the rest of his career. He was one of the most distinguished British scientists. He received the Nobel Prize in Chemistry in 1982 for electron crystallography and the determination of complex nucleic acid–protein biological structures. He received the Copley Medal of the Royal Society in 1985, was a member of the Order of Merit and President of the Royal Society (1996–2000).

Fuller made constructions from early childhood throughout his long life. He enrolled at Harvard University, but was a maverick and a rebel and never graduated. His main work was his two-volume Synergetics [3], in which he followed Aristotle's maxim, "The whole is more than the sum of parts." Fuller built his first geodesic dome in 1947; it was a re-invention because such domes had been built before, but his constructions became famous. In the wake of his activities, many companies built a large number of geodesic domes over the years. Synergetics contains many interesting ideas, and many of them appear to have been taken from others, but Fuller was known not to indicate sources or references and not to acknowledge the contributions of others. But he impacted the research directions even of genuine scientists, such as Caspar and Klug.

Klug chose to investigate spherical viruses when developing his own research project at Birkbeck College. There was a tradition of such studies at Birkbeck. J. Desmond Bernal and Harry Carlisle took the first X-ray pictures of spherical virus crystals in the late 1930s. Rosalind Franklin made important advances by solving the structure of the protein helix of the virus, without the RNA. When Caspar joined Birkbeck College, he and Klug teamed up and found crystals of viruses in the refrigerator [4, p. 315]. Caspar took the bushy stunt virus and Klug the turnip yellow mosaic virus.

In 1962, Caspar and Klug published their discovery of the icosahedral virus structures in a seminal paper [5]. They profusely thanked Fuller for the inspiration they received from his creations, and one of their illustrations was a Fuller geodesic dome. They noted that the resemblance of the geodesic domes to the virus structures attracted their attention. By the time Fuller visited Birkbeck, Caspar had returned to the United States, but Klug attended Fuller's presentations. They were not easy to absorb because Fuller spoke a peculiar language. Klug noted about one of Fuller's books that he was interested in reading, but he had to 'translate' Fuller's peculiar English into an English understood by everybody else. Klug referred to Fuller as "a Yankee inventor, practical, totally untheoretical" [4, p. 316]. 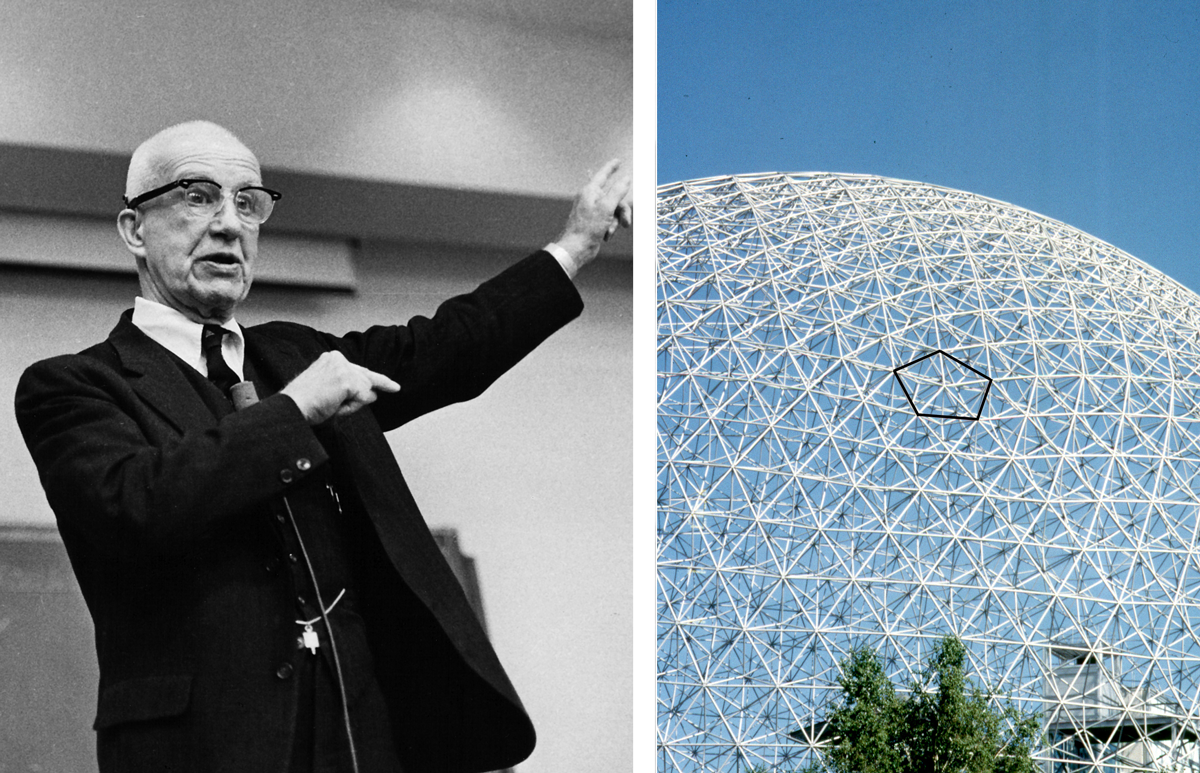 Left: R. Buckminster Fuller (1970) at Pacific High School, Saratoga, CA. Photograph by and courtesy of Lloyd Kahn. Reproduced with permission. Right: Section of Fuller's geodesic dome built for the 1967 Montreal Expo. Photograph by the Hargittais. One of the pentagons among the hexagons is highlighted.

Caspar and Klug introduced quasi-equivalence among the large number of identical protein subunits of the virus structure, and this light deviation, however, from perfect symmetry, raised eyebrows. In hindsight, we may consider this as a forerunner of what quasicrystals represent, certainly an extension of classical crystallography. When Caspar and Klug initially proposed quasi-equivalence in their description of virus structures, Klug remembered "Max Perutz said in an interview in Science in 1966 that Klug was telling us these 'most unlikely stories'" [4, pp. 316–317]. According to Klug, Perutz thought that the protein units could not adapt to their environments because they were rigid. Caspar and Klug built their ideas on the notion that proteins had flexibility. They stressed that the chemical structures did not have to satisfy the requirements of exact mathematical principles; instead, they had to satisfy the requirement of reaching a minimum energy configuration.

Caspar had two major appointments consecutively. Between 1972 and 1994, he was Professor of Physics and Research Professor of Structural Biology at the Rosenstiel Basic Medical Sciences Research Center, Brandeis University. He has been credited with coining the expression "structural biology". Then, he was Professor of Biology at the Institute of Molecular Biophysics, Florida State University in Tallahassee. It was there that we visited him in 1996 and recorded a long conversation with him. His activities crossed disciplinary lines between physics, chemistry and biology, and involved viruses, fullerenes and quasicrystals. We quote a few excerpts from our conversation [6]:

"Our theory for icosahedral virus design accounts well for the design of fullerenes. The basic geometry of hexamers and pentamers forming closed shells leads to icosahedral symmetry, which is the most regular way to do this."

"Quasicrystals are more interesting than crystals in the traditional sense. In the quasicrystal the same atom may take different positions with equal probability. But even in a quasicrystal one can categorize the atomic motifs and their number is limited. These motifs with local pentagonal or icosahedral symmetry can be combined in many different ways to generate quasi-periodic lattices. The activation energy of switching from one arrangement to another though is probably very high. However, in the growth process, the different arrangements are of equal probability. Thus there is no way of predicting which way the atom is going to go when the atoms are assembling."

On the general versus the individual:

"In physics, the greatest concern is in finding the underlying, unifying principle: abstracting out all the individuality, the differences among all sorts of systems to come down to some basic core. When I started in biology, I had a feeling that the use of such an approach would be constructive in understanding biological organization. Today, I think it is only a crude first step. Maybe we do find some generalization that is helpful for our comparing and categorizing of different systems, for example, the structural organization of different viruses. Almost all isomeric virus particles have icosahedral symmetry. But when we come down to such a core, we realize that what appears interesting in biology is not the underlying principle but the individual properties. … The uniqueness of the individual may not exemplify the properties of the group. There is some paradox here, and this makes biology so fascinating."

Istvan Hargittai and Magdolna Hargittai are at Budapest University of Technology and Economics, Hungary.
26 September 2022