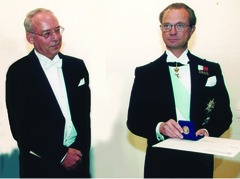 Hugo Rietveld (left) receiving the Gregori Aminoff Prize from King Carl Gustaf of Sweden in Stockholm in 1995. (More detail given at http://home.wxs.nl/~rietv025/.)

Hugo Rietveld has died at the age of 84 after a short illness. He leaves behind his wife, a son and two daughters, to whom we extend our heartfelt sympathy on behalf of the more than one thousand members of the Rietveld Mailing List.

Hugo was born on 7 March, 1932, in The Hague and migrated to Western Australia, where in 1957 he enrolled at the U. of Western Australia at the same time as Brian O'Connor and Syd Hall. He obtained his PhD under the supervision of Ted Maslen. Hugo pioneered single-crystal neutron diffraction at Lucas Heights Sydney with Terry Sabine, and their first paper was published in Nature in 1961.

Hugo's experience with manual data collection and refinement convinced him of the need to computerize such tasks. He programmed two of the first IBM 1620 mainframes in Fortran II. After obtaining his PhD in 1964, he joined the neutron diffraction group of the Reactor Centrum Nederland in Petten and his interest turned to powder diffraction because large single crystals were not available for the inorganic materials of interest.

The group at Petten, including Bert Loopstra, Bob van Laar and Hugo Rietveld, first addressed the problem of overlapping powder reflections by using a relatively long neutron wavelength (2.6 Å) with a pyrolytic graphite filter. This spread out the long d-spacing peaks, allowing more of them to be resolved. However, for structure refinement many peaks were still unresolved, and the shorter d spacings needed for high atomic resolution could not even be seen.

In a 1966 paper (Acta Cryst. 20, 508-513) Hugo had already used intensities from overlapping Bragg peaks. Along with others with the same problem, he then tried to fit multiple peaks to overlapping regions, but with limited success. A neutron powder pattern took a whole week to collect, and the local Electrologica X1 computer was less powerful than the IBM 1620 and programmed in Algol. It was in 1967 that the brilliantly simple but profound idea arose of refining the crystal structure together with the parameters describing the peak positions and profiles all together, as published in the famous 1969 paper (J. Appl. Cryst. 2, 65-71). Hugo distributed his Algol refinement program widely, but few papers were initially published using the method. One of us (AH), at Harwell, encountered the same problems with neutron diffraction for structural transitions. On the advice of George Bacon, AH visited Hugo in 1971 and brought back Hugo's new Fortran II version of the profile refinement program. A Harwell version, modified to model the anisotropic vibrations preceding structural transitions, was very successful, both at Harwell and with Brian Fender's students at Oxford, in particular Tony Cheetham and Bob von Dreele.

In 1973, when the UK joined the EEC and AH moved to ILL in Grenoble, another Oxford student (WIFD) performed his first neutron powder experiments on AH's new D1A high-resolution diffractometer, where a powder pattern took only one day to collect, and later only one hour. Again this work was very successful, and the number of papers using what Terry Sabine, in 1978, christened the 'Rietveld method' exploded, supported by new computer programs including those of Bob von Dreele and Juan Rodriguez-Carvajal. Yet it was not until 1977 that R. A. Young and colleagues applied the method to X-ray powder diffraction, leading to further rapid growth in the number of publications. Thousands of X-ray publications using Rietveld refinement are now published every year.

Perhaps the greatest acknowledgement of Hugo's work was his receipt of the 1995 Aminoff Prize, awarded by the Royal Swedish Academy of Sciences. And in December 2012 Hugo was thrilled to receive an e-mail from David Blake of the CheMin team of the Mars Science Laboratory rover Curiosity. David wrote that he did not think they could have convinced NASA to send an X-ray powder diffractometer to Mars without the Rietveld method.

After almost 50 years, the Rietveld method has returned to its origins in the Netherlands, with the third of us (LvE) completing a fast new high-resolution neutron powder diffractometer (J. Appl. Cryst. 49, 1398-1401) on the Delft reactor. Last year Hugo Rietveld was the guest of honor at the opening of this new diffractometer. He, who had been honored throughout the world for his achievement, was honored in his own country by a new generation working with neutron powder diffraction and Rietveld refinement.

Having achieved all of that, and with a loving family and friends, he will surely rest in peace.