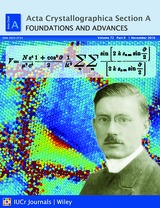 The 100th anniversary of powder diffraction is being celebrated in a blog by André Authier, Professor Emeritus at U. P. et M. Curie, Paris, France, and former president of the IUCr. The blog, at http://blog.oup.com/2016/09/x-ray-powder-diffraction-method/, describes the role of Paul Scherrer and Peter Debye in Göttingen, Germany, and Albert Hull in Schenectady, NY, USA, in discovering - independently - one of the most powerful and widely used methods for analysing matter. This centenary - along with the 50-year jubilee of the introduction of the Rietveld method - was recently commemorated at a Debye and Rietveld symposium in Amsterdam, The Netherlands (https://debye-rietveld.nl/). And it is 80 years since the Nobel Prize in Chemistry was awarded to Debye 'for his contributions to our knowledge of molecular structure through his investigations on dipole moments and on the diffraction of X-rays and electrons in gases'.