Australian facilities for small angle X-ray (SAXS) and neutron (SANS) scattering and reflectometry are expanding. Forty scientists whose interests ranged from biology through chemistry, physics and materials science to engineering attended the first small angle and surface scattering meeting held at the Australian Nat'l U. (ANU) in April 1998. These techniques are used to examine the detailed structure of condensed matter on scales from about 1 to 100 nanometers, in the supramolecular nanostructure range. By use of isotropic substitution or tuning the wavelength it is possible to selectively highlight different components in bulk materials and all types of surfaces and to follow chemical reactions and microstructure and texture formation at a scale inaccessible to ordinary microscopy or light scattering. New instruments now available include an X-ray reflectometer at the Research School of Chemistry; two more SAXS machines at ANU and the U. of South Australia; and a SAXS/Grazing incidence X-ray diffraction on "BigDiff" at the Australian Nat'l Beamline Facility, Tsukuba. Applications from the area of materials included studies of templated mesoparticles silicates, titania/zirconia nanoparticles, composite films of silica and organic surfactants, colloidal silica, and quantum well semiconductor devices. More direct applications to petroleum geology, domains in wood pulps, and activated carbons for water treatment were presented. The meeting left a clear impression that with the new apparatus these techniques can provide a new view of structure in a range in the past thought too large for chemistry but too small for engineering. 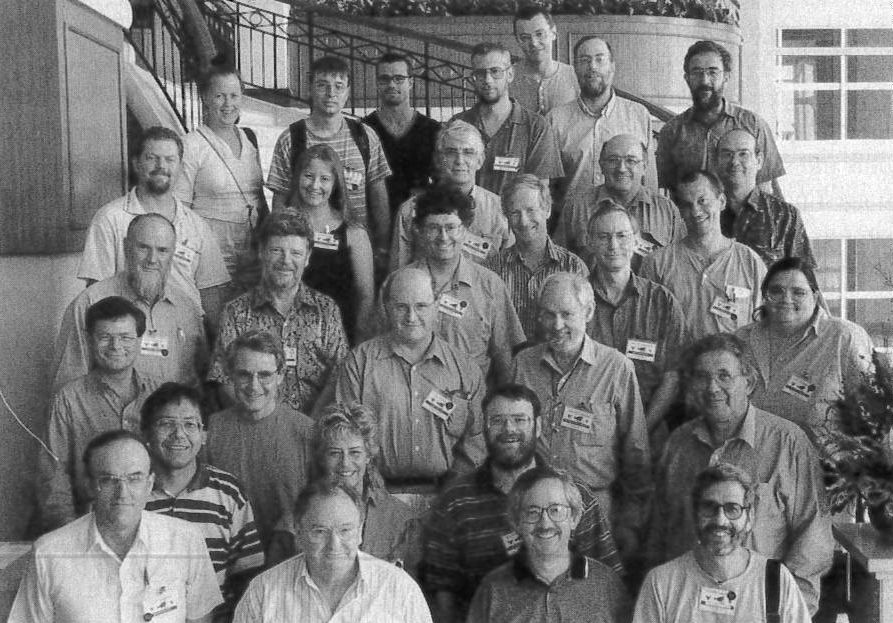 Australian Crystallographers in attendance at the AsCS meeting in Kuala Lumpur, Malaysia, Oct. 14, 1998. First letter, FAX or e-mail identifying all those present (in order) will receive a copy of the most recent volume of the Transactions of the ACA, Structural Tools in Organometallic and Coordination Chemistry.

St. Vincent's. The Protein Crystallographic Unit at St. Vincent's Inst. was founded by N. Isaacs in 1978. While at St. Vincent's, Neil solved the structure of a "goose-type" lysozyme and crystallized human chorionic gonadotropin, a hormone involved in early pregnancy. In 1991, the appointment of M. Parker as Head of the Unit was supported by the Wellcome Trust. The Unit was renamed The Ian Potter Foundation Protein Crystallography Laboratory. It is well equipped with a Riguku RU-200 rotating anode generator, two MAR-research image plate detectors and cryo-cooling equipment from Oxford Cryosystems. The lab has been fortunate in attracting talented postdoctoral fellows including M. Wilce, B. Kobe, J. Rossjohn and S. Feil. The lab has concentrated in three major areas of biology over the last seven years; membrane-interacting proteins, detoxifying enzymes and protein kinases. Particular highlights include the structure determinations of aerolysin, prefringolysin O, twichin kinase and various glutathione transferases.

University of Canterbury. The U. of Canterbury Chem. Dept. upgraded a Siemens P4 diffractometer to a SMART CCD system at the beginning of May 1997. Making it possible to gather two data sets every 24 hours. The SMART is heavily used for wood fibre diffraction determining the preferred orientation of cellulose crystallites in timber. This industrial application has proved both interesting and lucrative. There are many fascinating potential applications in studying powder diffraction in almost real time.

Monash University. A new macromolecular X-ray lab is being setup at Monash U. following the appointment of O. El-Kabbani. A Rigaku RU-300 rotating anode with a MAR-345 image plate detector system and a Oxford cryogenic low temperature system and an SGI 02 workstation.

University of Western Australia. The two new area-detector diffractometers at the Crystallography Centre at the U. of Western Australia were officially "blessed" on Wednesday, July 29, with a gathering of financial backers. The BRUKER Smart1000 AXS has been collecting 140 data sets per month and a MAR345 Image-plate system has been installed and tested. At this opening science-fest S. Hall, A. White, V. Streltsov and M. Wilce outlined future activities of the Centre in their respective areas. M. Wilce heads the macromolecular effort and holds a joint appointment with the Crystallography Centre and the Dept. of Pharmacology where he has facilities for bacterial expression, purification and crystallization. Matthew's macromolecular group will be studying an integral membrane protein - mechanosensitive channel protein, protein/DNA complexes and complexes of sub-units of ATPase.