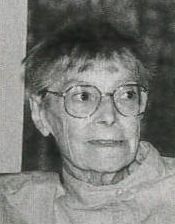 I am a little sorry now that when I learned that Newsletter editors were seeking someone to write a notice about Anne for the ACA Newsletter, in my love for her I volunteered. I feel that it would have been fairer to her if what she was had been said by someone not so close to her. But having agreed to do it, here I go.

Anne was not a scientist. In 1943, having gone to Radcliffe College and gotten a degree in government, she joined the Radiation Laboratory at M.I.T. to do her bit for the war effort; her job had to do with ordering special-design transformers for the lab. She never really came to know what a transformer was, and within a few months, feeling that her efforts were really helping our opponents more than ourselves, she left the lab for a job she could handle. She was there long enough, however, for us to meet, and shortly after the war we married.

But if not a scientist herself, she cared for scientists and in an important sense understood their work; married to a scientist, she often said that she was a camp-follower to the scientists. And she was articulate. From about the mid-40s to the mid-70s, she was a successful writer, mainly of short stories, of which several found their way into the Foley's and the Best American Short Stories collections. When in 1949 we went to England so that I could study crystallography under Dorothy Hodgkin, she helped keep us financially afloat with her sales of stories, and with her job as an editor at the Oxford University Press. It happened too, in 1949, that she met Rosalind Franklin, and they became fast friends. We saw Rosalind fairly frequently through the next two years, while we were in Oxford and she in London, this period covering most of the period of Rosalind's work on DNA, though not the final months, as we came home to the U.S. in Sept 1951, a few months prior to the solving of the DNA structure. In the next few years she visited us several times in the U.S., and I think it was in 1957 that Anne helped nurse her in England following her unsuccessful operation for cancer. Rosalind died in 1958.

Time passed again. In 1962 Crick, Watson, and Wilkins received the Nobel prize for the DNA structure, and in 1968 Watson published "The Double Helix". That book, although interesting and good reading, was felt by most crystallographers to be unfair to Rosalind and to undermine the spirit of friendship and cooperation in which crystallography had traditionally been done. In 1969, at the Eighth International Congress, which was held that year at SUNY Stony Brook, just a few miles from where we then lived, a number of crystallographers suggested that Anne should write a book in answer to Watson's. Anne said "It's your science, why don't you write it?", but in the end agreed that she would do so. The rest I think most people know. She worked 5 years on "Rosalind Franklin and DNA" (and incidentally received much help on it from Francis Crick), and it was published in 1975. I think the situation today is truer and better for the book having been written. The book is still in print, and seems to win about a thousand readers each year, mainly in the colleges.

Following that effort, Anne treated herself to a long-standing wish and, at the age of 52, went to law school, getting her degree quite high in her class at NYU Law School. She did pro bono law work for a time, and then, learning of the body of environmental law then being created by the New York State legislature, devoted much of her later years to beneficial application of that law locally in the beautiful coastal area in Long Island in which we lived. Still later she became the much-loved justice of our local court, a position which she filled until about a year and a half before her death.

She was an excellent public speaker, and the talks which she gave from time to time about Rosalind, as at the 1983 ACA Lexington Ky. meeting, or about Dorothy Hodgkin at the tribute to Dorothy and Pauling given at the 1995 ACA Montreal meeting, I believe are still remembered. She loved crystallography and crystallographers.

She died on March 13, 1998 in Somerville NJ of pneumonia and the complications of scleroderma, the disease against which she fought for the last decade of her life.

David Sayre
(from the ACA Newsletter)