The ability to reliably predict some function or physical property of a system based on prior information and computational calculation has long been the goal of many scientists as it reduces the need for expensive resource and time-consuming experimentation. Of particular interest over the past decade has been the potential to reliably predict crystal structures of molecular compounds. Crystal structure prediction is of considerable interest to those working in industries that process molecular materials, for example pharmaceuticals or pigments, where an outbreak of polymorphism can wreak havoc with the physical properties of the desired final form. To those scientists observing the field from the sidelines, the progress of the technique has been difficult to follow with claims of outrageous successes on compounds that are “too sensitive” to mention, only leading the technique further into urban mythology. It is with this background in mind that the recent paper by Lommerse, Motherwell, Ammon, Dunitz, Gavezzotti, Hofmann, Leusen, Mooij, Price, Schweizer, Schmidt, van Eijck, Verwer & Williams ['A Test of Crystal Structure Prediction of Small Organic Molecules', Acta Cryst. (2000), B56, 697-714], testing the ability of 11 established research groups in the field of crystal structure prediction to correctly predict the structures of three different molecular compounds of varying complexity, is particularly timely. It also gives the reader a sense of what is and what is not achievable. The paper reports the results of a blind test of the major methodologies for ab initio crystal structure prediction that were presented at a collaborative workshop held in May 1999 at the Cambridge Crystallographic Data Centre (UK). 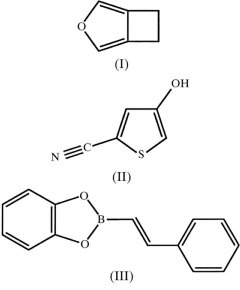 Three compounds of differing complexity (I, II, III) were selected by an independent referee from a set of 20 unpublished molecular structures. All three structures were restricted to a maximum size of 30 atoms including hydrogen and had to belong to a relatively common space group with one single molecule in the asymmetric unit. The three levels of complexity were defined as:

The participants were also invited to determine the unpublished structure of propane as an added extra. Compound I has two polymorphs, but this information was not provided to participants. They were allowed to submit a maximum of three predictions per compound and asked to give reasons and a degree of confidence for their selection. The paper provides a short overview of the processes involved in crystal structure prediction discussing both the lattice minimization and the statistical methods. This is followed by more detailed descriptions of the individual methodologies representing the principal computer programs used by the research groups themselves. The results of the study were revealing in that no one program provided consistently reliable results; however, seven proposed structures were close to an experimental one and as such were classified as correct. Four of the seven correct structures were predictions for structure I in the first level of complexity; however, for this polymorphic structure only the unstable form in all cases was correctly predicted. One structure was correctly predicted for II and III and one for propane. The methods that gave accurate predictions all came from the lattice energy minimization procedures and not the statistical methods. From these results it is clear that the technique is still very much in its early stages although I have no doubt that it will mature in time to yield meaningful information about systems that are not tractable by experimental methods. The answer to the question raised by Gavezzotti in 1994 in the review 'Are Crystal Structures Predictable?' [Acc. Chem. Res. (1994), 27, 309-314] has certainly moved on from the categorical 'No' to 'Maybe sometimes'.