The 5th Size-Strain conference ‘Diffraction Analysis of the Microstructure of Materials’ (SS-V) was held October 7-9, 2007 at the Conference Centre Garmisch-Partenkirchen (Germany). The most recent in the series initiated in 1995 in Liptovsky Mikulas (Slovakia) and continued in (Germany), (1998), (Italy) (2001) and the Czech Republic (2004).

The conference dealt with materials microstructure and properties, as they can be studied by diffraction methods, with a special interest in polycrystalline materials. As with the previous Size-Strain conferences, SS-V focused on methodologies for studying lattice defects, residual stress and texture in thin films and surfaces, line-broadening analysis, line-profile fitting and modelling based on fundamental parameters for applications in materials science problems.

The conference was attended by approximately 100 scientists from more than 25 countries including 20 participants from less privileged countries that were supported financially. 36 oral contributions and 50 posters were presented during the three day program put together by a committee chaired by E.J. Mittemeijer and P. Scardi. A small but lively exhibition area hosted booths of sponsoring companies, and in particular the ICDD (see photo below), represented by H. Göbel, D. Rafaja, R.L. Snyder and P. Scardi. 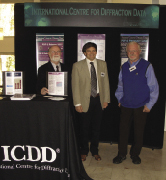 
The success of SS-V was in a substantial part due to the devoted support by a group of young scientists and students, all members of the department of E.J. Mittemeijer, who assisted the local organizers (E.J. Mittemeijer, A. Leineweber and U. Welzel).

The next Size-Strain conference will be organized in France in 2010. Exact dates and location are soon to be announced by the Chairman, O. Thomas.