As the fortieth consecutive Erice course it certainly deserved the RUBY status it was accorded. The drug discovery focus is a recurring theme begun in 1983 and this year’s scientific program, the collaboration of directors Colin Groom (UCB UK), and Joel Sussman (Weizmann Inst.), featured several presenters who were regulars from some of the earliest meetings, notably Tom Blundell (U. of Cambridge and Astex Therapeutics) himself now director of the Erice International School of Crystallography, Peter Goodford (U. of Oxford) the creator of GRID, and Trevor Petcher, (University of Bern). The program offered a rich diet of recent structural and bio-informatics results from academia such as Bill Weis’ (Stanford) beta-andrenergic receptor and Gabriele Cruciani’s (Perugia) probing of the impact of structure on metabolic studies, and examples of drug-design applications from industry including Giovanna Scapin’s (Merck) on dipeptidyl peptidase-4 inhibition and Sandra Cowan-Jacob’s (Novartis) on countering Gleevec resistance. Piquing widespread interest was the introduction of some nifty new tools for communication of structure by Eran Hodis and Joel Sussman, including Proteopedia (www.proteopedia.org/). 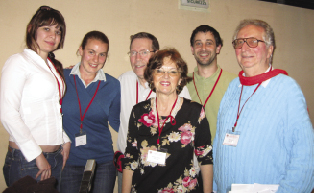 Prizewinners and Organizers: (L to R) Taiana de Oliveira, Alice Clark (striking the “di Milo” pose), Joel Sussman, Paola Spadon, Colin Groom and Lodovico Riva di Sanseverino (Ida Rosnes unavailable).
In the final analysis, though, the Erice meeting is a school and the emphasis was firmly on students. They made up the majority of the 165 scientific participants and came from countries all across the globe including Turkey, Croatia, Latvia, Lithuania, Brazil, Nigeria, South Africa, India, Malaysia, Australia, New Zealand and Vietnam. After lectures in the morning, the program most days shifted to workshops in the afternoon. These offered demonstration sessions by experts on crystallization, database resources like CCDC, EBI and PDB, CCP4 and computational and bio-informatics tools like CCP4, DOCK and GRID. Among the several innovations targeting young scientists were the award of special priority for younger questioners in discussion periods after lectures and the spirited oral poster sessions where presenters had two minutes to preview and promote their posters. This is a powerful and intense experience for young scientists, one they benefit from greatly in terms of new knowledge, new techniques, new friendships, new self-confidence and new spirit. It was a wonderful thing to witness.


Most meals were informal collections around tables at local restaurants and were covered by the registration fees. Many evening meals after workshops were social events: pizza and pasta parties, the RUBY dinner and dance. In addition there were two excursions to archeological and historical sites of Phoenician and Greek heritage.

None of this could have happened without the careful preparation and precise execution of the schedule by the local organizers, Paola Spadon (U. di Padova), and Lodovico Riva di Sanseverino (U. di Bologna). The computational and communications resources were the work of John Irwin (UCSF), a permanent member of the team. As in the past, an enthusiastic cadre of young scientists, immediately recognizable by their orange scarves, provided all manner of assistance to the organizers.

The Vaciago Award to the young scientist judged most energetic questioner in discussion after lectures went to Brazilian Taiana de Oliveira (PhD student at the U. of Tromso, Norway). The IUCr presented two poster prizes, a copy of International Tables, Volume F, signed by Editors Michael Rossmann and Eddy Arnold, both of whom presented this year, and a copy of International Tables, Volume A. They went to Alice Clark (Massey U., New Zealand) for her poster on Filamin A and Ida Rosnes (National University Hospital, Oslo, Norway) for her poster on Endonuclease V (5), respectively.

At the end of the RUBY dance, “RUBY” necklaces and crystals, as well as local souvenir tiles, were awarded to several participants for exceptional displays of elegance, ability, spirit and luck.

Two weeks after the close of the school this year, a better than 75% response to an anonymous web-based questionnaire gave a record average score of 91.41 to the question “Score the meeting 0 to 100, 100 maximum”.