Eligio Perucca: serendipity across the Atlantic 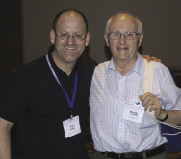 Bart Kahr and Davide Viterbo
In a symposium dedicated to the award of the Fankuchen prize to Frank Herbstein, Bart Kahr (U. of Washington), presented a paper entitled “Eligio Perucca first observed induced optical activity in 1919”. Perucca was a physics professor at the Politecnico di Torino, who terrorized many generations of engineering students. I was never his student, but I still have his excellent Physics textbook, full of detailed descriptions and beautiful pictures of now obsolete instruments.


Bart Kahr told us that in a 1919 paper (Nuovo Cimento, 1919, 18, 112-154) Perucca had anticipated the discovery of two important effects: induced optical activity, normally attributed to Pfeiffer (Chem. Ber. 1931), and enantioselective adsorption on chiral crystals normally attributed to Bonner (Science, 1974). With modern instruments Kahr and his colleagues repeated experiments, in which Perucca had measured the rotatory power of chiral NaClO3 crystals grown in the presence of a racemic mixture of a blue dye. They confirmed his observations and in Kahr’s Seattle lab the terrible Professor Perucca became an unsung hero. Kahr found an article on Perucca by V. De Alfaro (a physics professor in Torino) in which Perucca was described as “un personaggio bizzarro”. He then read in the biography of Primo Levi by M. Anissimov that Perucca had been one of the professors who in 1941 refused to assign a thesis to Primo Levi (another Turinese) because he was Jewish.1 The hero began to look like a “bizarre fascist”. I could not refrain from intervening and took the microphone. After describing an example of Perucca’s terrible treatment of students, I questioned the report by M. Anissimov because Levi was a chemistry student at the University of Torino, while Perucca was teaching physics at the Politecnico, a completely separate academic institution. I also added that in those times everyone had to show sympathy to the regime.

An immediate friendship with Bart was the best outcome of the episode. Joel Bernstein, who was chairing the session, was also impressed by the event and in his description in “ACA RefleXions” he wrote: “Unbeknownst to Kahr, Davide Viterbo was in the audience.……. Even before Kahr completed his lecture, Viterbo requested –permission to relate a few personal accounts, confirming Kahr’s anecdotal tales of Perucca’s classroom tyranny. The question of whether Perucca had first observed induced optical activity is still open to debate, but the lecture, and the atmosphere created by that incident and the day long sharing of academic experiences by the speakers provided a fitting close to a unique day of award symposia honoring two distinguished members of the crystallographic community. It was the stuff memories are made of.”

Back in Torino I contacted Vittorio De Alfaro, Perucca’s assistant Luigi Radicati di Brozolo, Perucca’s nephew Gianni Perucca, and Primo Levi’s sister Anna Maria. They all agreed that Perucca was an anti-fascist and that Anassimov’s biography is unreliable. Renato Portesi, who was Primo Levi workmate for years at SIVA, a varnish factory near Torino told me that once he took a sample to test to the physics department of the Politecnico and when he came back Primo Levi mentioned Perucca and said that he attended some of Perucca’s lectures because he was known to make anti-fascist remarks.

In the “Potassium” account Levi tells how he met “the assistant” (N. Dellaporta), who allowed him into his lab. He wanted an experimental thesis, but Jews were not allowed in the labs and he had to be content with a descriptive dissertation on Walden inversion signed by Prof. Ponzio. Milone was Ponzio’s assistant and later my professor of Physical Chemistry.

In conclusion I only have two certainties: Perucca was not fascist and Anassimov’s biography can not be taken at face value. I enjoyed this historical search and I thank Bart Kahr for stimulating it.

1. Primo Levi is my favorite author because I have at least three affinities with him: I am a chemist, I am Jewish and I was born and still live in Torino.