The role of BIOXHIT Training, Implementation and Dissemination (TID) Centres in the use of highly automated macromolecular crystallography beamlines 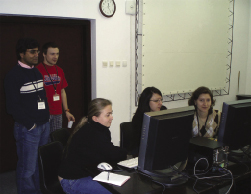 A teaching session at the Poznan TID centre during the 6th Training course, April 7-9, 2008. the participants are being supervised in computer practicals by Santosh Panjikar from EMBL-Hamburg.
Biocrystallography (X) on a Highly Integrated Technology Platform for European Structural Genomics (BIOXHIT) is an integrated project that has been supported through funds (~10 M €) from the European Union during 2004-2008. All European synchrotron facilities with beamlines for macromolecular crystallography and major software developers are among the 20 partners. The main aim of BIOXHIT, with Victor Lamzin (EMBL-Hamburg) as coordinator, was to develop a pipeline for structural genomics (biology) that will take a protein from the crystallization stage through the data collection at highly automated synchrotron beamlines to structure determination. The evaluators of BIOXHIT from the US and Japan concluded that the project has been very successful in achieving its goals. The next step is to implement remote access that allows users to control experiments being conducted at synchrotrons from home. The project has been successful in implementing European standards for mounting frozen crystals used at the 25 beamlines for macromolecular crystallography that serve about 250 structural biology groups in Europe. 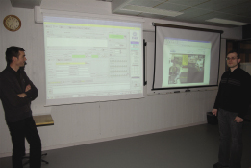 Demonstration of remote access data collection at the ESRF performed as part of the CPP4 workshop held in Oulu, April21-25, 2008.
It is not trivial to make optimal use of all the new advanced technologies developed in the BIOXHIT project, and it is an obvious challenge to train the structural biology community to become efficient users of the synchrotron beamlines. BIOXHIT has conceived and implemented the concept of special dedicated TID (Training, Implementation and Dissemination) Centres to overcome these difficulties. A special TID committee has looked after these activities. The TID centres were selected based on their scientific excellence, educational experience, experience in use of synchrotron radiation, and links to other groups in the same geographical area. In 2004 TID centres were established at Oulu University, Finland and at the Inst. of Bioorganic Chemistry, Polish Academy of Sciences in Poznan, Poland. Two additional TID centres were created in ITQB, Oeiras, Portugal and in IMBB-FORTH, Heraklion, Greece. The TID centres have made, and are still making, major valuable contributions to the BIOXHIT project, which comprise developments of the data collection pipeline and training material and, last but not least, to the training of present and future users of the macromolecular crystallography beamlines in Europe. Short accounts of activities at four TID centres follow:

The Poznan TID Centre used the support from BIOXHIT to organize a modern computer laboratory for training activities and acquire equipment and accessories for crystal handling and shipping and for the implementation of the remote data collection strategy. Two practical workshops on “Structural Biology with Synchrotron Radiation” have been organized every year and thus trained about 150 students. The workshops have been cost-free to graduate and postgraduate students coming from all over Europe and sometimes quite far away (China, Mexico). Leading European (and occasionally American) experts in synchrotron protein crystallography give lectures and teach small-group hands-on practicals, providing the students with exposure to the situation they will face at macromolecular synchrotron beamlines, which includes live data collection sessions at the ESRF. The three day workshop ESRF includes an afternoon get-together (with famous “TID cakes”) and a cultural event. Anonymous surveys of participants’ opinions have been extremely candid and useful. We hope to be able to carry this mission beyond the official timeframe of BIOXHIT.

The first activities of the Oulu TID centre were to become familiar with the most recent data-collection and data-processing protocols used by the BIOXHIT partners. After visits to the ESRF, Grenoble and to the MOSFLM developers at the MRC-LMB, Cambridge in 2005, the first two courses were organized on this theme in 2006. The courses were held in our Linux class room, at the Dept. of Biochemistry, co-sponsored by the Biocenter Oulu. Also in the subsequent two courses, in 2007 and 2008, data collection protocols were included. In 2007, the BUSTER/TNT and SHARP software of Global Phasing Ltd. were presented and remote data collection at the ESRF was demonstrated. In 2008, the course included remote data collection at the ESRF as well as the use of the structure determination pipeline software of the CCP4 package. The last two courses also provided good opportunities for the students to work with their own data. Altogether 84 participants have attended our courses where 24 tutors, mainly from the BIOXHIT partners, have provided a unique forum for in depth discussions with the students. The majority of the participants were from the Nordic and other European countries; altogether the participants originated from 14 different countries, including Israel and India. Our TID activities have also included software (DNA) testing and preparation of manuals and training videos (www.dna.ac.uk/). Another important activity has been our involvement in the remote data collection setup at the ESRF. In this context we have been involved in brainstorming and testing of the e-HTPX and ISPyB database development, which is an integral part of the remote data collection protocol. 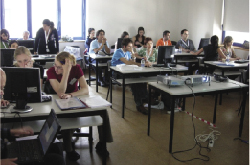 The Greek TID-Centre for BIOXHIT is a joint effort of the protein crystallographers at the Institute of Molecular Biology and Biotechnology (IMBB) of the Foundation for Research and Technology-Hellas (FORTH) in Heraklion, Crete and the Institute of Organic and Pharmaceutical Chemistry (IOPC) of the National Hellenic Research Foundation (NHRF) in Athens. The centre used BIOXHIT seed-money for several powerful computers that are running up-to-date programs for crystal structure determination and analysis of biological macromolecules. Our Centre has collaborated with the Finnish centre on the preparation of DNA training material. A BIOXHIT supported course on crystallization, data collection and processing was run June 2008 in Heraklion.