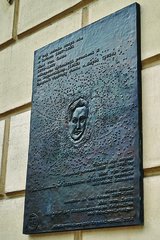 In the years 1887-1891, Max von Laue (1879-1960) attended Friedrich-Wilhelms-Gymnasium, now St. John's Senior High School No. III (III LO im. św. Jana Kantego) in Poznań. About 20 years later, working at Ludwig-Maximilians-U. München, Max von Laue conceived of an X-ray diffraction experiment with a crystal as a three-dimensional diffraction grating. Such an experiment was successfully conducted under Laue's instructions by Walter Friedrich and Paul Knipping in 1912. Laue's discovery provided evidence about the wave nature of X-rays; proved the periodic lattice structure of crystals; and provided an estimate of the interatomic distances in molecules, which had to be of the same order as the X-ray wavelength, and won him the 1914 Nobel Prize in Physics). The discovery, in the hands of W. H. and W. L. Bragg (Nobel Prize in Physics, 1915) was soon converted into a powerful tool for the determination of the structure of chemical molecules. Today, the precise 3D structure of nearly one million chemical compounds is known, including molecular giants such as the ribosome. 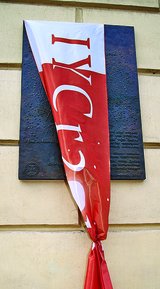 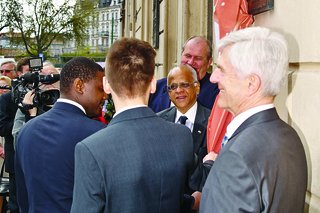 As part of the celebration of IYCr2014, a Committee was established in Poznań, Poland, to commemorate Laue's time in Poznań with a Memorial Plate. The Committee included M. Jaskolski (Chair), W. Depmeier (IUCr Executive Committee), E. Framska, M. Gdaniec, K. Kordus, H. Koroniak, A. Legocki, A. Sakson and W. Kwiatek. The Plate, funded by the Polish Chemical Society and executed by sculptor Robert Sobociński, was unveiled on the School building on April 11, 2014. The dedication ceremony was attended by J.-P. Ngome-Abiaga (UNESCO), Bleicker (Chargé d'Affaires of the German Embassy), G. Desiraju (President, IUCr) and A. Roodt (ECA). It was followed by a Symposium, which showed Laue as a scientist and a champion of freedom, and his legacy as a source of inspiration for others. The lectures were presented by A. Więckowski, W. Schmahl, J. Lipkowski, W. Rypniewski, A. Wlodawer, J. Pełka, U. Heinemann, A. Kiliszek and D. Hoffmann. The School students presented a poster session dedicated to Max von Laue and various aspects of his discovery. The best poster, by A. Cieślak and W. Palczewska, was awarded with a prize sponsored by the Polish Synchrotron Radiation Society. Other sponsors of this function included the Ministry of Science and Higher Education, IUCr and ECA.

The importance of this Laue Day, when scientists, students, dignitaries and ordinary people from a number of countries came together in a secondary school, was eloquently summarized by Prof. Desiraju: 'Science is truly a way of bringing nations together and I join the community of crystallographers of Poland and Germany to celebrate the subject of crystallography and to honour the memory of one of our greatest sons.'

A concert of choral music was performed by the School Choir 'Proscenium' and the Poznań Chamber Choir, a Museum with a collection of original documents connected with Max von Laue was opened at the School, and a closing dinner was held.