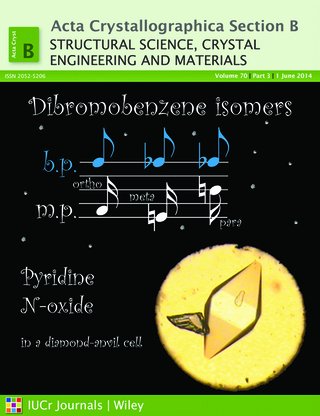 One century of modern crystallography, celebrated in this year, 2014, has brought about many developments, some of which have involved the use of 'non-ambient conditions', which in their most severe form can be described as 'extreme-conditions' crystallography. In addition to recognizing this increasingly vibrant research field, this special edition also represents a refocusing of Acta Crystallographica Section B to become the journal of choice when it comes to publishing high-quality results from non-ambient crystallographic studies.

The first low- and high-temperature structural determinations were performed soon after the inception of X-ray diffraction structural analysis. One of the first low-temperature determinations was the structure of benzene in 1932, about the same time the first reports on high-pressure powder diffraction experiments were published. These high-pressure experiments yielded results of low precision due to the thick walls of the pressure vessels.

It wasn't until 1959, when scientists invented the main device for high-pressure crystallography – the diamond-anvil cell (DAC) – that work at elevated pressure became more routine. This simple but ingenious apparatus still continues today to break all records of pressure, exceeding that at the centre of the Earth (364 GPa).

High-pressure techniques are constantly being developed and presently laboratory X-ray diffraction studies can be complemented by spectroscopy, also on the same sample in the DAC, as well as by experiments in specialized large-facility stations at synchrotrons, and at neutron spallation and nuclear reactor sources. Internally and externally heated DACs are available, as well as laser heating, allowing temperatures well over 1000°C. Other types of high-pressure devices have also been developed for various specific purposes, including physical, chemical, biological and most of all materials studies.

Endeavours in non-ambient crystallography have not been limited to structural characterizations at temperatures and pressures other than ambient. There are also studies of materials exposed to different gaseous environments or where the sample is subjected to various electrical or magnetic fields. Capillary-based sample cells have been particularly popular with these kinds of studies and a number of designs for the investigation of gas–solid interactions have been presented in the literature.

Clearly, non-ambient crystallography is a far broader field than can be done justice in a single Special Issue. The contents of this issue merely represent a small sampling of what is possible. Indeed, the number of non-ambient structure determinations, phase transformation and other non-ambient studies reported in the literature steadily increases annually. It indicates that researchers reach out for non-ambient conditions not only in their search for new materials but also to improve their understanding of the properties of matter under normal conditions, but also under various conditions, even at extreme depths inside the Earth or other planets and conceivably even stars.