2019 Meeting of the Crystallographic Society of Japan 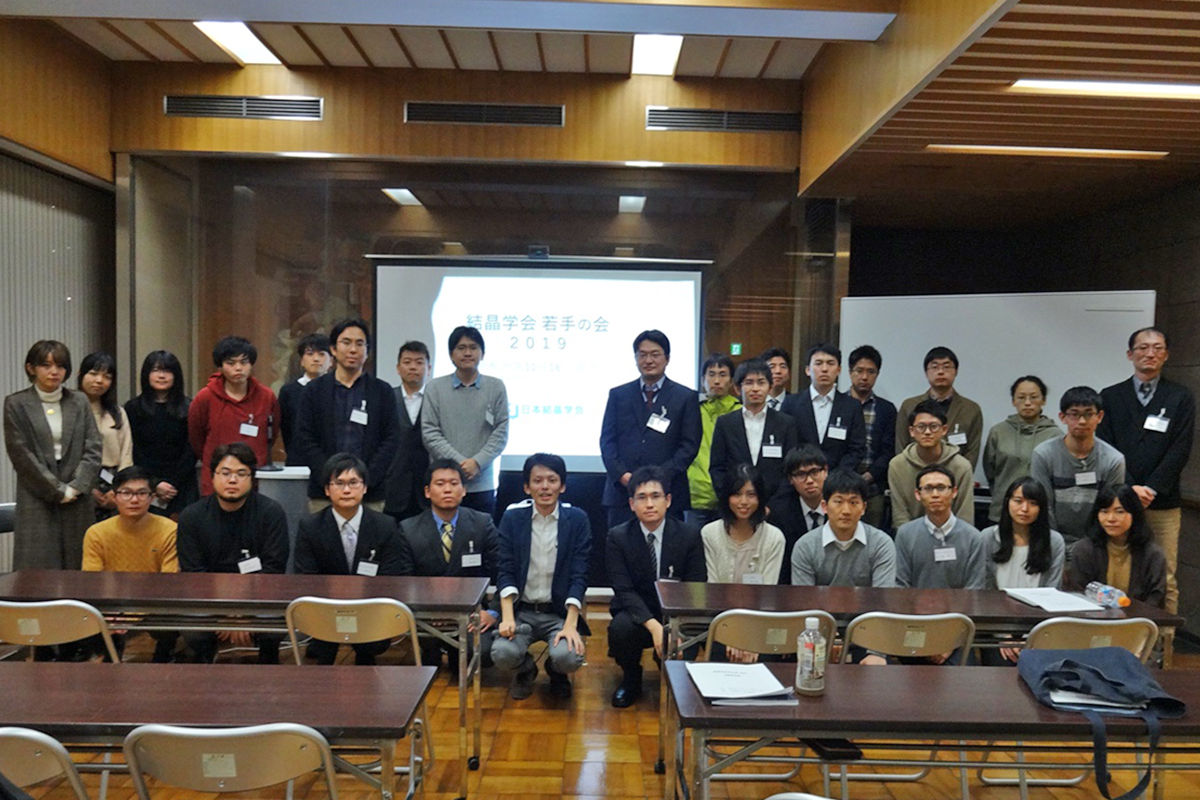 Participants in the Young Crystallographer’s Meeting 2019.

The 2019 Annual Meeting and General Assembly of the Crystallographic Society of Japan (CrSJ2019) was held during 19–20 November at Kanazawa Bunka Hall in Kanazawa, Japan, and about 250 crystallographers participated. The meeting featured 43 oral and 89 poster presentations covering all aspects of crystallography, three award lectures, three microsymposia, a special meeting promoting gender equality, a luncheon seminar and an industrial exhibition featuring 10 companies/organizations. The microsymposia were titled “Local structure study by pair distribution function analysis applied to crystalline materials”, “Crystal structures ranging from molecules to 3D networks based on metal elements and development of functional materials” and “Protein crystallography for progress in life science” and a total of 13 invited talks were given.

At the CrSJ Awards Ceremony, the S. Nishikawa Award was given to Kunio Takayanagi (Tokyo Institute of Technology) for his research “Pioneering study on the correlation between surface nanostructure and quantum conductivity by electron crystallography”, the Research Award went to Kunio Hirata (RIKEN) for his research “Development of a rapid automatic data collection system ZOO for structure determination from protein microcrystals” and the Young Crystallographer Award went to Wataru Shihoya (University of Tokyo) for his research “Crystal structures of the human endothelin ETB receptor providing the receptor activation mechanism”. 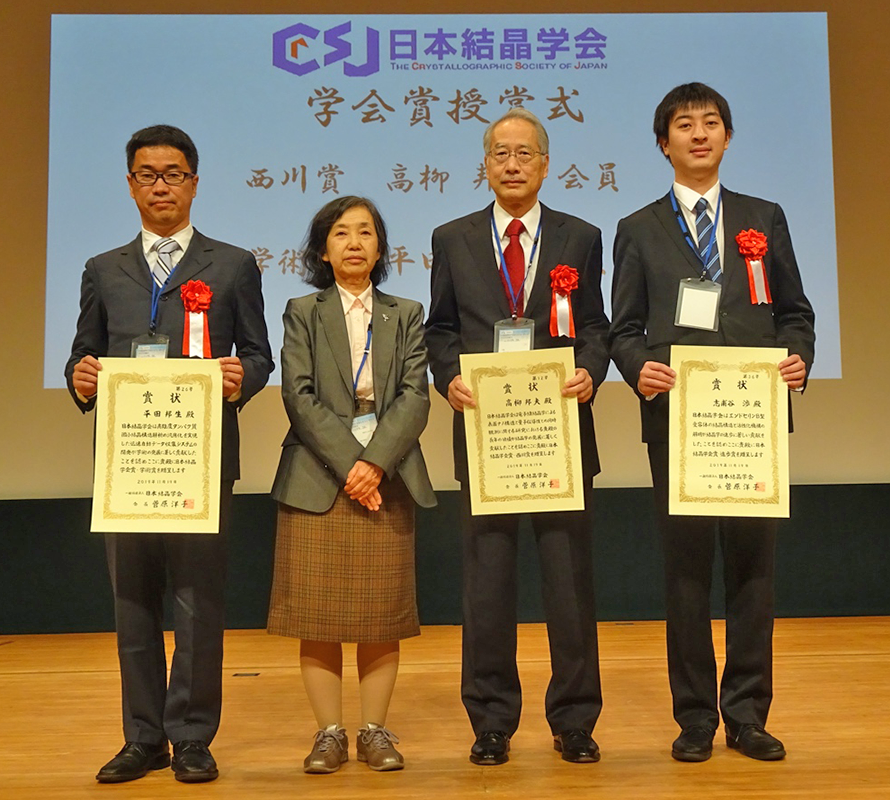 The recipients of the 2019 CrSJ Awards with the President of CrSJ. From left: K. Hirata, Y. Sugawara (President), K. Takayanagi and W. Shihoya. 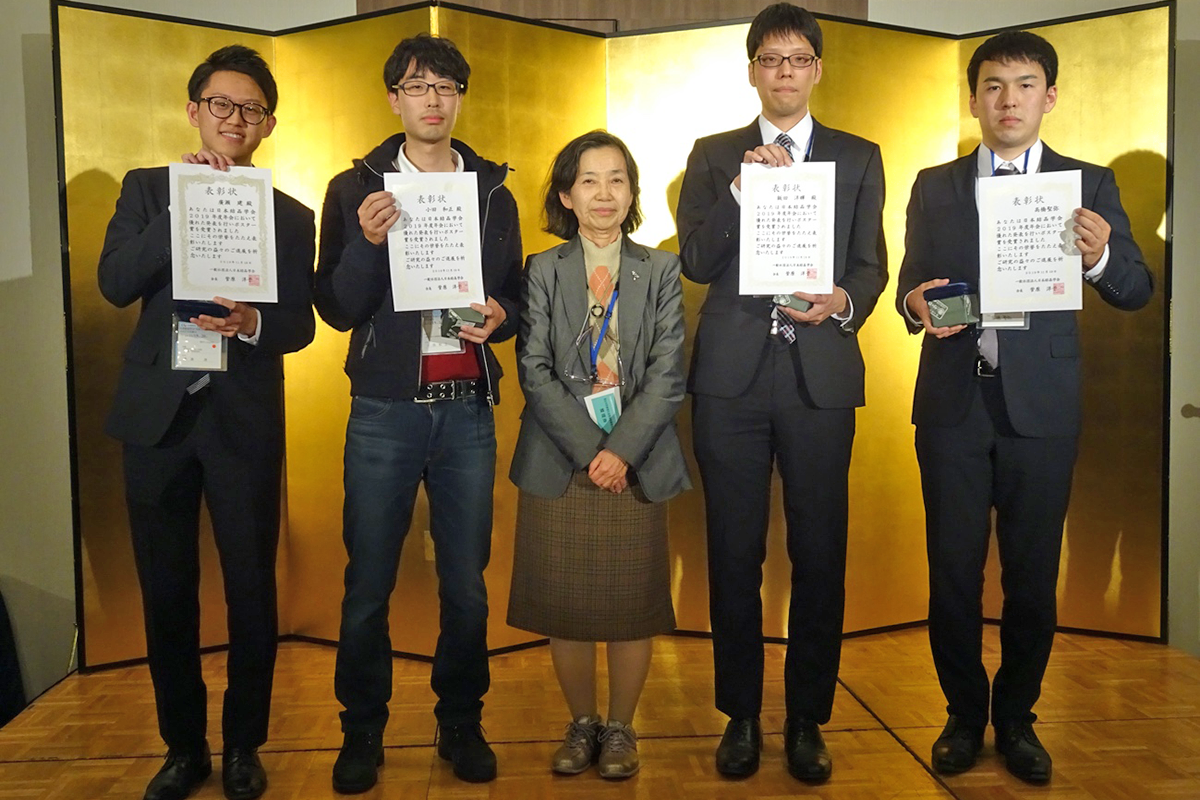 The Young Crystallographer’s Meeting 2019, a satellite meeting of CrSJ2019, was held on 18 November at the satellite plaza of Kanazawa University close to the venue of CrSJ2019, and 38 researchers/students took part. This meeting is held every year to give an opportunity for young researchers and graduate students to communicate and network with each other, especially beyond the barriers between physics, chemistry and biology, in an informal environment. This year, four lectures by K. Hiroi (NIMS), Y. Terasawa (Waseda University), K. Ishida (Gakushuin University) and D. Urushihara (Nagoya Institute of Technology) were given and a banquet was held after the lectures.

The 70th anniversary annual meeting will be held during 27–29 November 2020 at the Tsukuba International Congress Center in Tsukuba, Japan. The chair of the organization committee is E. Nishibori (University Tsukuba) and the program committee is chaired by S. Adachi (KEK).