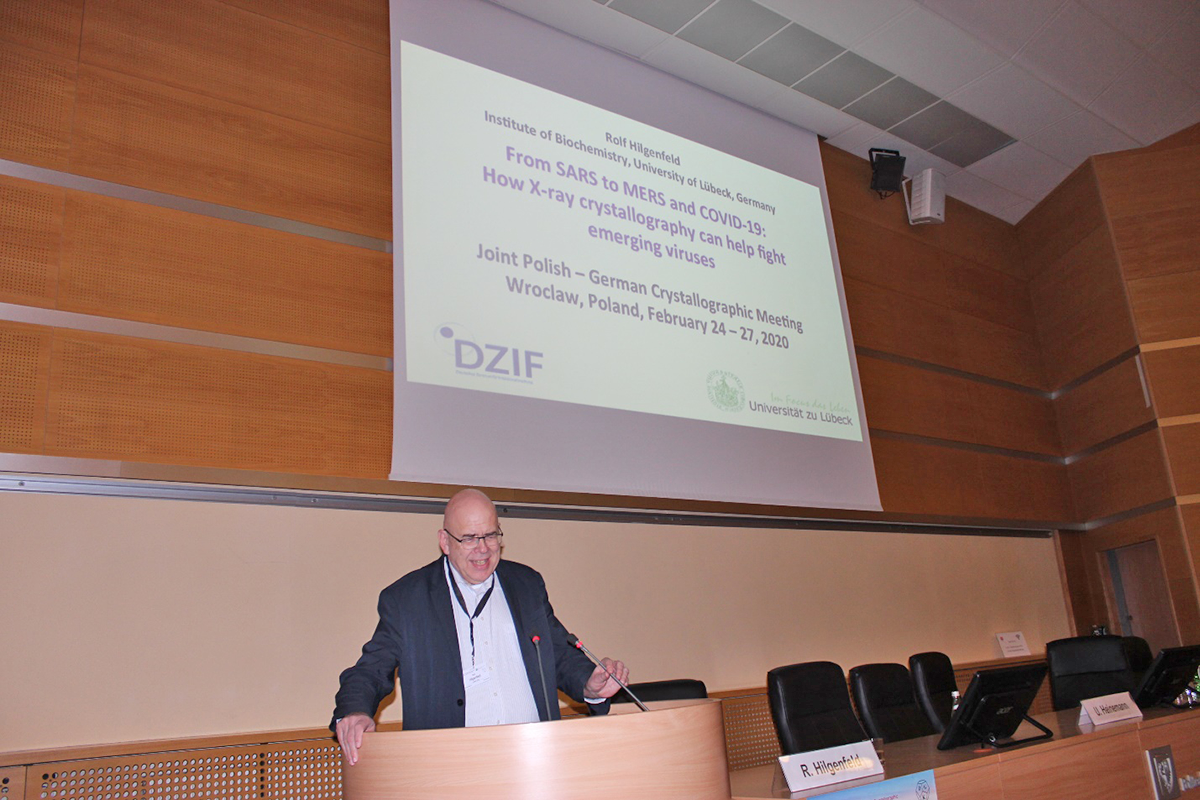 Rolf Hilgenfeld during his plenary talk on how crystallography can fight emerging viruses such as SARS, MERS and COVID-19.

The German Crystallographic Society (DGK) and the Polish Crystallographic Association (PCA) both have long-standing traditions of organizing annual events. However, this year a Joint Polish-German Crystallographic Meeting took place for the first time, gathering over 320 participants in Wrocław, Poland, from 24 to 27 February 2020. The conference chairs, Marek Główka (Lodz, Poland), Marek Wołcyrz (Wrocław, Poland), Susan Schorr (Berlin, Germany) and Udo Heinemann (Berlin, Germany), filled a four-day program with great talks and posters. Multiple scientific sessions were interspersed with plenary talks, which – judging by the attendance – were found interesting by crystallographers from very different disciplines. 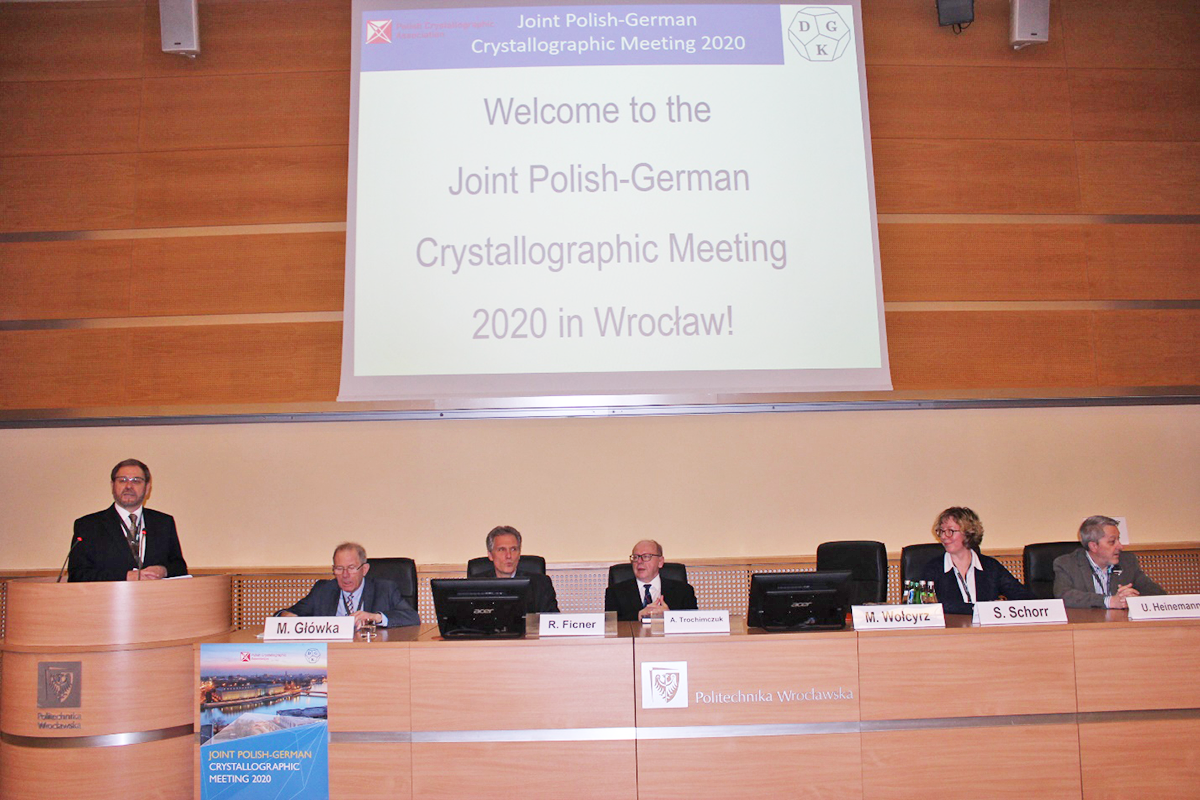 Conference chairs and organizing committee members during the welcome session of the Joint Polish-German Crystallographic Meeting 2020.

A measure of an extraordinary plenary talk is whether it can capture the undivided attention of an audience with varying backgrounds and interests. And this is exactly what happened when Rolf Hilgenfeld (Lübeck, Germany) presented his lecture on SARS and MERS viruses with a special focus on the recently emerged SARS-CoV-2 (formerly known as 2019-nCoV). The audience’s interest was initially driven by the timeliness of the topic. However, the story of solving the crystal structures of the SARS-CoV-2 main protease and its potential inhibitors, already tested on cell lines, within just days of the publication of the virus genome was captivating in itself. [The Lübeck team's research has now been published in Science.]

Traditionally, the first day of the meeting was an opportunity for the DGK award winners to be announced. Dieter Fenske (Karlsruhe, Germany) received the Carl Herrmann Medal to acknowledge his life-time achievements, especially for his research in inorganic chemistry and crystallography. The Will Kleber commemorative coin for outstanding scientific contributions went to Robert Dinnebier (Stuttgart, Germany) in recognition of his exceptional achievements in the field of powder diffraction, as well as in the training of young scientists and in the service to the research community.

This year, the Max von Laue Prize for outstanding achievements by young scientists was awarded twice for the third time in its history. Tobias Beck (Hamburg, Germany) was recognized for his work on the development and characterization of novel crystalline bio-hybrid materials, which are composed of combinations of protein container building blocks and inorganic nanoparticles. In addition, Matthias Zschornak (Dresden, Germany) was recognized for his methodical development of resonant X-ray scattering to make orbitals visible and his work on defect migration and separation in oxides under the influence of external fields. Finally, the Waltrude and Friedrich Liebau Prize promoting interdisciplinarity of crystallography was awarded to Julian Voss-Andreae (Portland, OR, USA) for his significant artistic and creative work.

The organizers provided an opportunity for 19 young crystallographers to present their work in the form of lightning talks. The jury decided to award three of them with Best Presentation Awards: Elżbieta Wątor (Kraków, Poland), Bipasha Debnatyh (Dresden, Germany) and Zhenyu Wang (Berlin, Germany). 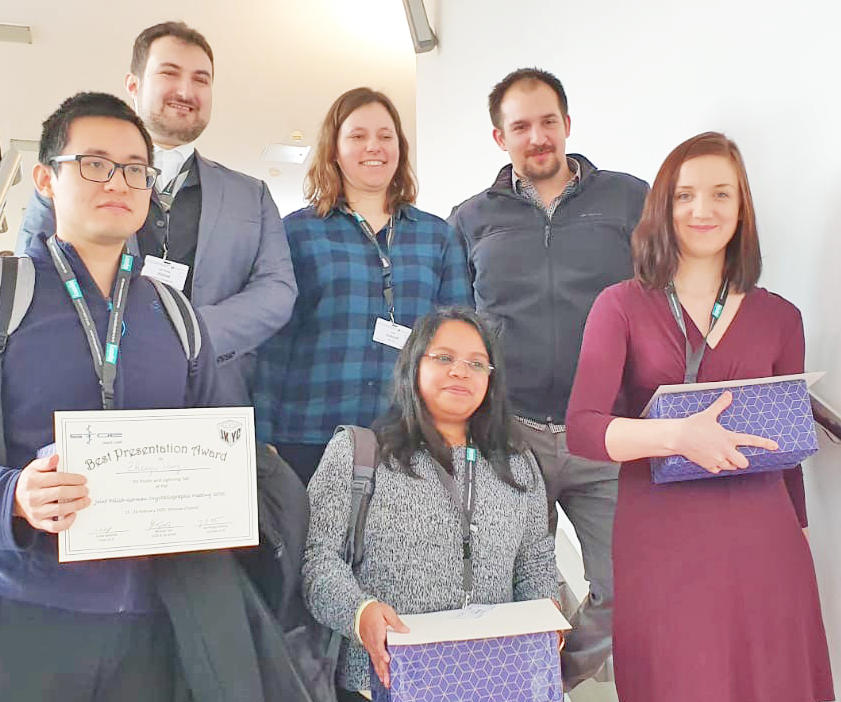 The laureates of the Best Presentation Awards, Zhenyu Wang, Bipasha Debnatyh and Elżbieta Wątor, with the jury members.

The city of Wrocław, which is a traditional location for Polish crystallography meetings, was a beautiful venue for scientific discussions that lasted long into the night. The conference dinner, organized at the amazing Afrykarium of Wrocław’s zoo, was a perfect ending to the third day of exciting talks and scientific discussions. 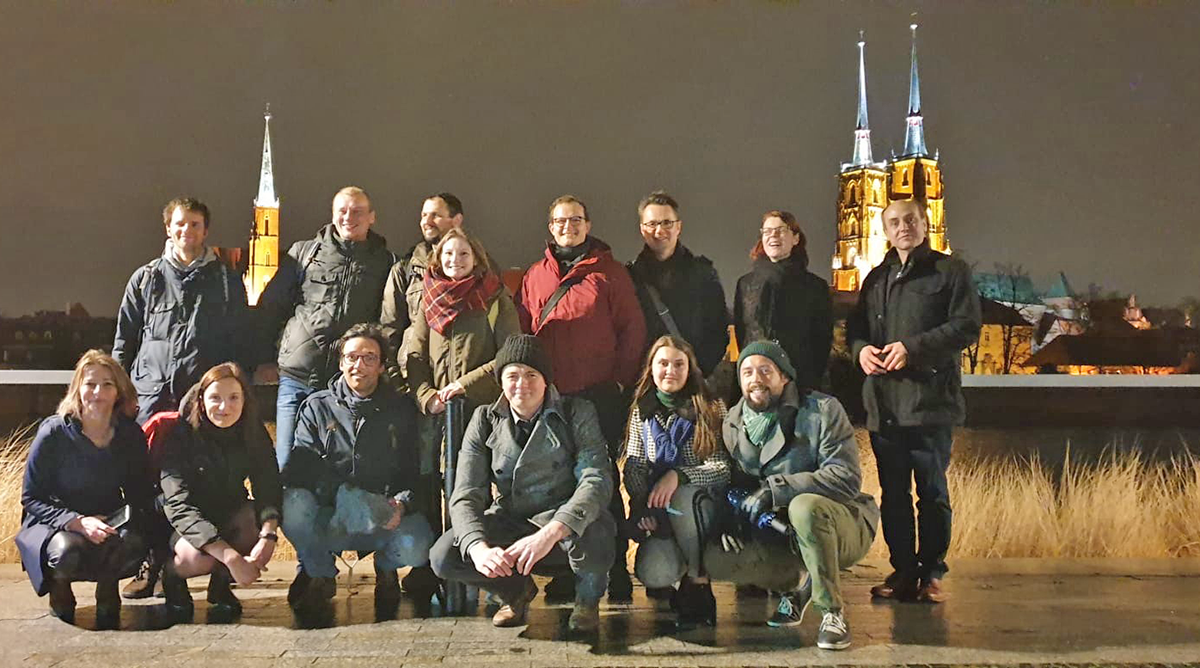 Polish and German participants sightseeing after the poster session.