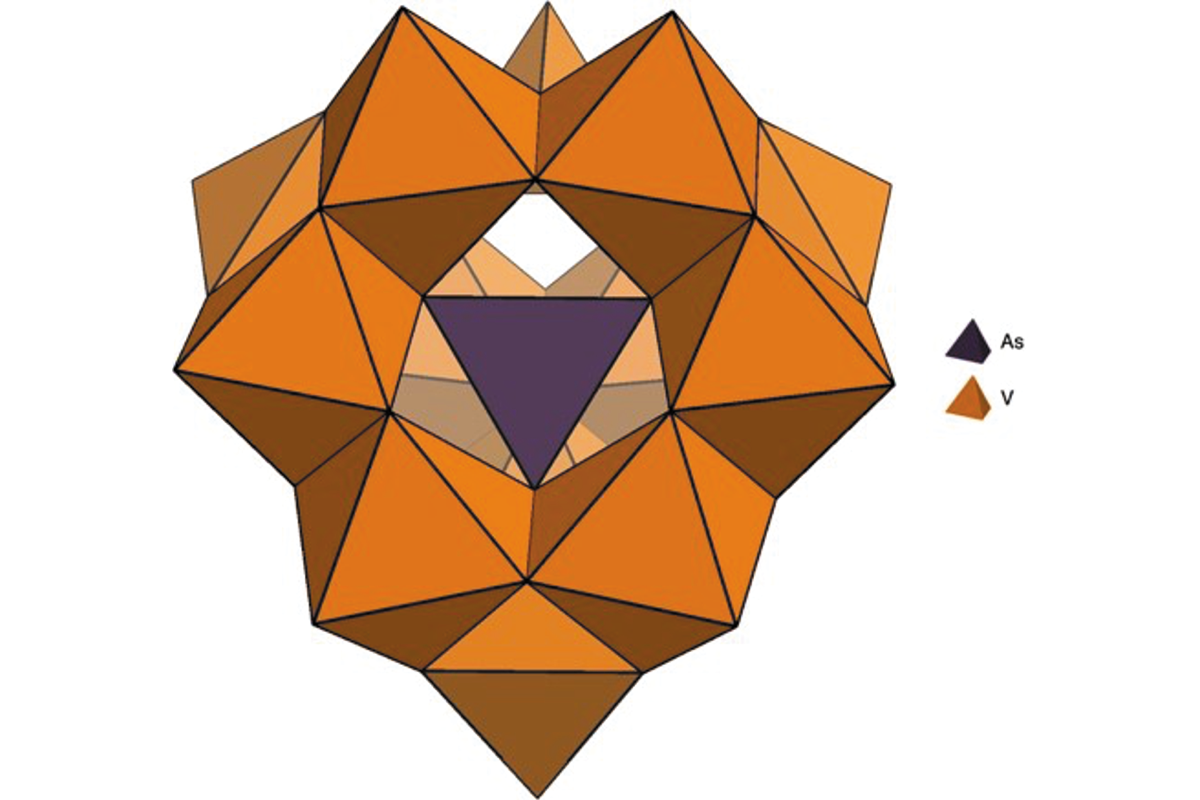 In his article, Krivovichev (2020) examines the emerging class of polyoxometalate-bearing minerals and the origins of their unusual complexity in terms of information content. The 42 minerals in this class constitute less than 1% of recognized mineral species, but their descriptions mostly require the current generation of X-ray diffractometers, and it is likely that many more will be discovered by new mineral hunters in the future. Indeed, this is a rapidly growing class with 34 (81%) of its species described within the past two decades.

The average complexity of mineral crystal structures is about 220 bits per unit cell, and all 42 polyoxometalate-bearing minerals exhibit much higher than average complexity owing to the presence of nanoscale metal oxide clusters in their structures. The information content of the most complex of these, the uranyl carbonate ewingite, is more than 100 times higher than average. The structure of ewingite is also the most complex known mineral structure.

In 1783, Carl Wilhelm Scheele provided the first surviving written report of blue waters in the Idaho Springs (USA) region, but undoubtedly these had been observed previously. The blue waters are thought to be colored by soluble molybdenum oxide clusters (Mo3O8.nH2O) that crystallize as ilsemannite (and related species), which was first described in 1871. The mineral is inadequately characterized even today, in part because of its poor crystallinity and likely corresponds to several different species containing a variety of molybdenum oxide clusters that are examples of natural polyoxometalates. Dissolution of so-called ilsemannite in water produces a greenish-blue solution that later deepens to a typical molybdenum blue.

Under the right conditions, metal oxide clusters spontaneously self-assemble in aqueous solution. These anionic clusters can contain several hundred atoms and have dimensions ranging up to several nanometres. These have been extensively studied by inorganic chemists, who have revealed the impressive range in cluster structures and compositions. Owing to their lower charge densities and well defined structures, metal oxide clusters behave very differently in solution than simpler metal-bearing species, and high solubility is a hallmark of such clusters. There are many potential and realized applications of metal oxide clusters, and they are excellent model systems for studying structure–composition–size–property relations.

Differences in chemical bonding distinguish self-assembling metal oxide clusters in aqueous solutions that persist at the nanoscale, as compared to nucleation of nanoscale clusters that continue to grow and become crystals. Polyoxometalates are generally defined as the class of metal oxide clusters that contain multiple bonds between metal cations and oxygen. Such bonds are common in the case of d0 transition metals of groups V (V5+, Nb5+, Ta5+) and VI (Mo6+, W6+), as well as the actinides U, Np and Pu in their pentavalent and hexavalent oxidation states. The doubly or triply bonded oxygen atoms tend not to bridge to other metal centers and instead serve to stabilize the surface of the polyoxometalate. As such, polyoxometalates are inherently nanoscale materials and they have no macroscale analogs. Other types of nanoscale metal oxide clusters have surfaces that are stabilized by different chemical features, including protonation of oxygen atoms and capping by organic ligands.

Synthetic transition metal and actinide-based polyoxometalates have been extensively studied both in solution and the solid state. These clusters have been definitively demonstrated to self-assemble in solution, where they can persist indefinitely, or crystallization can be induced by evaporation from solution or various other methods. It is particularly important to recognize that such clusters can form and persist in natural aqueous solutions, where they can be highly soluble and mobile in geochemical systems. Minerals sometimes form that reveal and record their presence, but it is probably much more common for such clusters to enhance metal transport in a geochemical environmental system and then vanish without a trace. Indeed, the occurrence of polyoxometalates in natural systems presents a substantial challenge for geochemical models that traditionally do not account for nanoscale metal oxide clusters in aqueous systems, especially as it pertains to the mobility of these metals. Their solubilities are often much higher than those of simpler metal oxide complexes owing to their lower charge densities.

Crystallization of polyoxometalates and other types of metal oxide clusters in nature produces minerals with higher than normal complexities (information content). These minerals also are dominantly of lower-temperature origin, which in general tends to result in more complex structures. All but two of the polyoxometalate-bearing minerals form in aqueous systems, with notable exceptions that crystallize directly from volcanic gas.