A crystal growing competition at home - outreach activities during lockdown 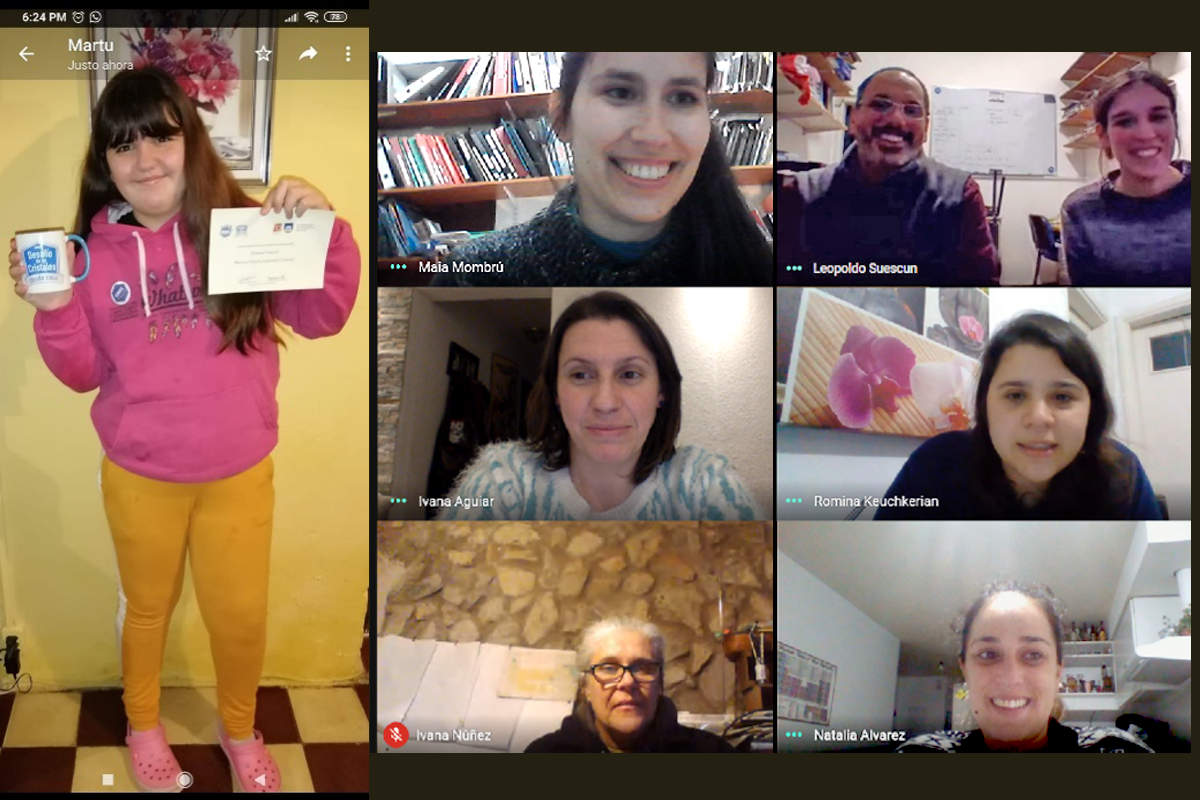 Martina González (left), one of the first-place winners of the Desafío de los Cristales with her well-deserved mug and certificate, and some members of the organizing group in the closing Zoom meeting: Maia, Leopoldo, Isabel, Ivana A., Romina, Ivana N. and Natalia.

In February 2020, the group in charge of organizing the Crystal Growing Competition in Uruguay (Concurso Nacional de Crecimiento de Cristales, CNCC) was already preparing activities for the seventh edition [1]. As usual, planning started with brainstorming about how to obtain financial resources, depending on the budget as to what activities could be added or would be suspended, and which companies or organizations would be contacted for support. Activities were distributed among group members and letters of request for support from different organizations were written, as the school-year activities were starting in the first week of March [note that the school calendar runs from March to November in Uruguay (in the southern hemisphere)].

This planning, however, became redundant on 13 March when the government implemented a state of sanitary emergency [2] after the first four positive cases of COVID-19 were confirmed in subjects coming from abroad. This declaration included a voluntary lockdown and a cancellation of all public activities that would imply indoor gatherings. Among them, teaching activities at all levels were put on hold without a date for resumption.

After two weeks of general discomfort and some forceful adjustments to virtual teaching and Zoom meetings, the CNCC WhatsApp group became active again, with questions on what to do, if we should respond to the crisis in any form or if we should just shut down for the year. Luckily, by 28 March, brainstorming had produced some very feasible ideas, and the unbreakable spirit of the group prevailed over the difficulties brought about by the lockdown and the widespread uncertainty. Eventually, the idea to organize a fully home-based competition materialized.

The CNCC would become "CNCC - Desafío de los Cristales - desde Casa" (The CNCC Crystal's Challenge from Home) and would replace a month-long crystal growing activity mainly focused on the classroom with significant participation from teachers with a set of short activities that would only require home appliances and safe "chemicals" and that could be performed with the help of parents or older kids. 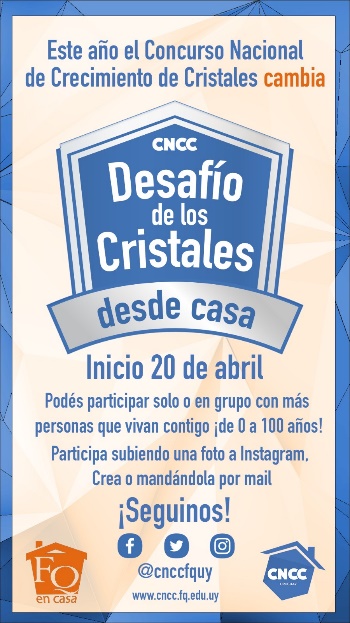 From 28 March to 7 April all the organizers performed home experiments with sugar (sucrose) and table salt (sodium chloride) in order to define challenges that were to be performed by the general public in one week and which could be evaluated only on the basis of pictures. By 15 April, six challenges had been planned, including photography of crystals, salt and sugar crystal growing, identification of periodic patterns at home and a Q&A series, with the aim to cover at least 2 or 3 months of (at that time expected) school closure.

The new Desafío de los Cristales started on 20 April and consisted of two-week long activities that would be performed by participants at home, and their results would be submitted to the organizers in the form of pictures or through social media (Instagram @CNCCfquy), email (cnccfquy@gmail.com) or "plataforma CREA" [6], the platform for teaching resources of the Public Education Administration (ANEP) [7] of Uruguay to which all public and many private schoolchildren have access.

The organization counted on the widespread use of smartphones and laptops with a camera (distributed by the government to 100% of public school students aged 5–18 years old through an OLPC-like program called Plan Ceibal [3,4]) and a more than 90% smartphone/internet-access coverage of the country [5], which allowed every participating child/adult to interact through a web browser.

The challenges, available at [8], are listed below with some of the best pictures received from the participants: 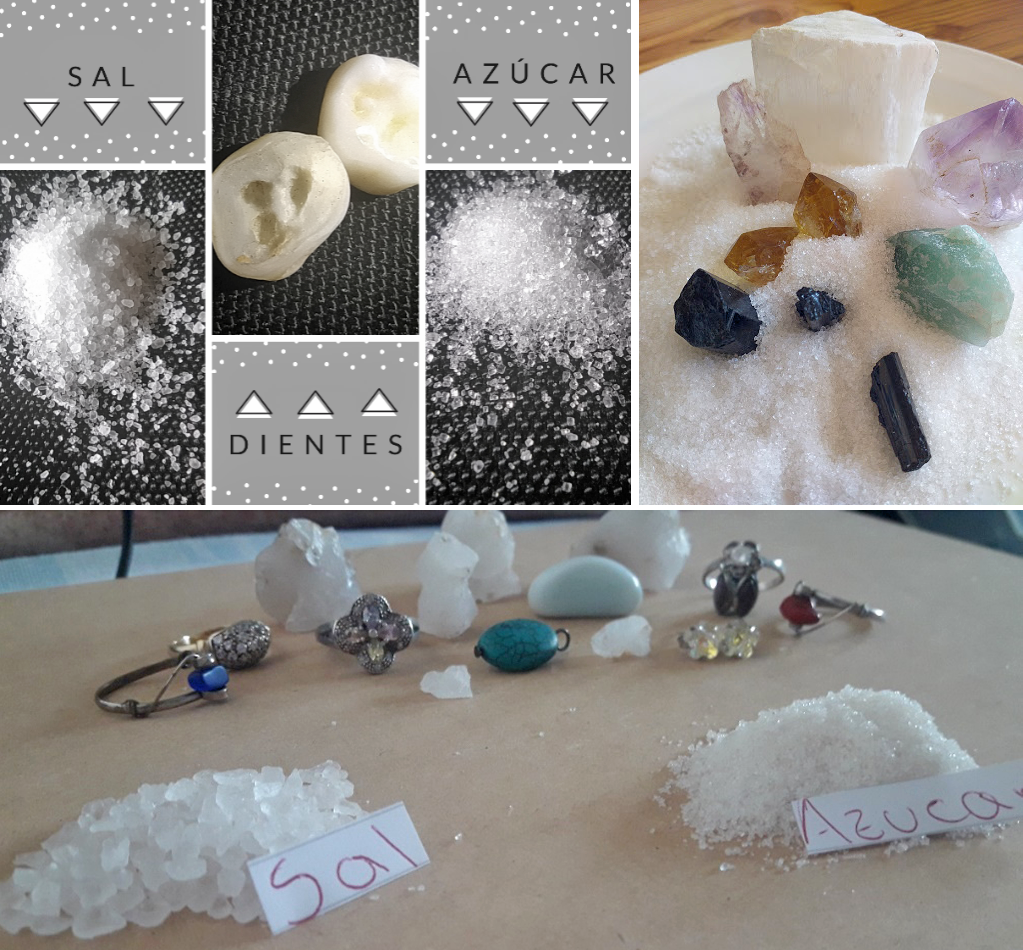 #1 Taking pictures of crystals available at home and presenting them in a fancy way (where students learned that glass products do not qualify as crystals); photos/collages by Abigail Algibar (top left), Gabriel Musso (top right) and Samira Cabrera (bottom). 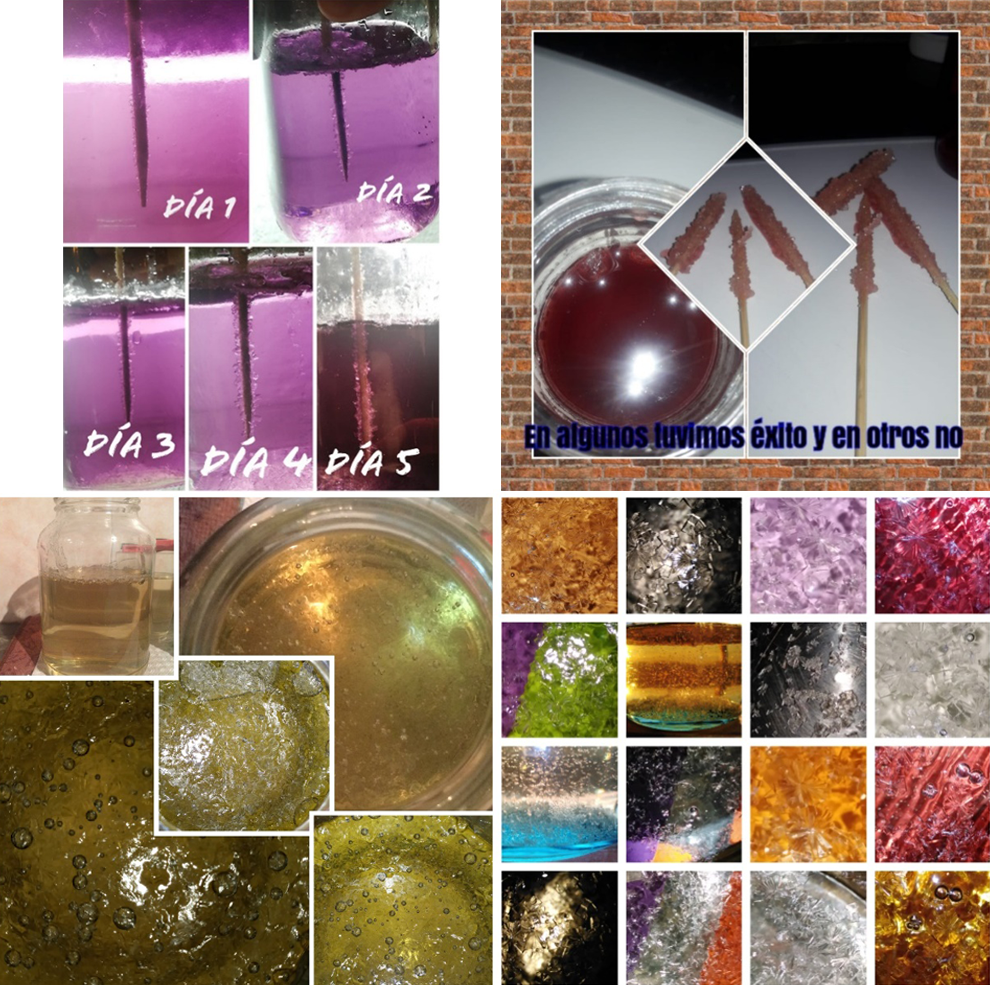 #2 Growth of colored sugar crystals by seeding, where students learned that you need to be patient (and also that caramel does not qualify as a crystal); photos/collages by Agustina Pereyra (top left), Antony Becerra (top right), Martina González (bottom left) and Emiliano Velloso (bottom right). 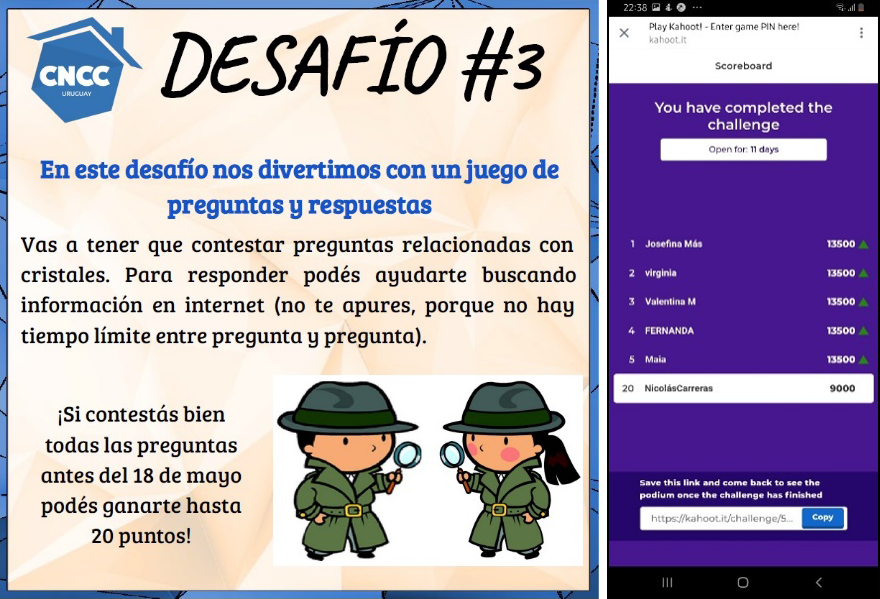 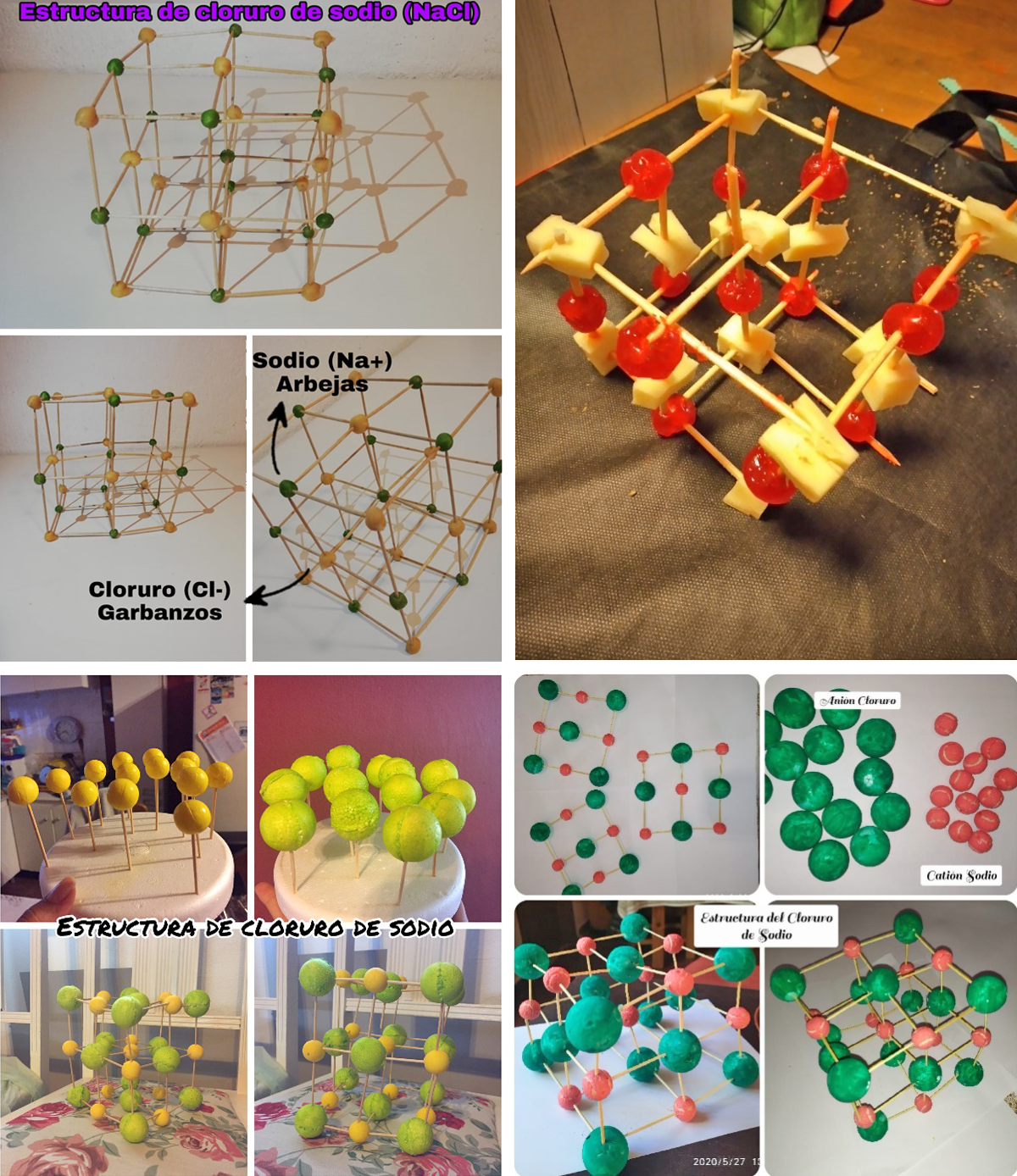 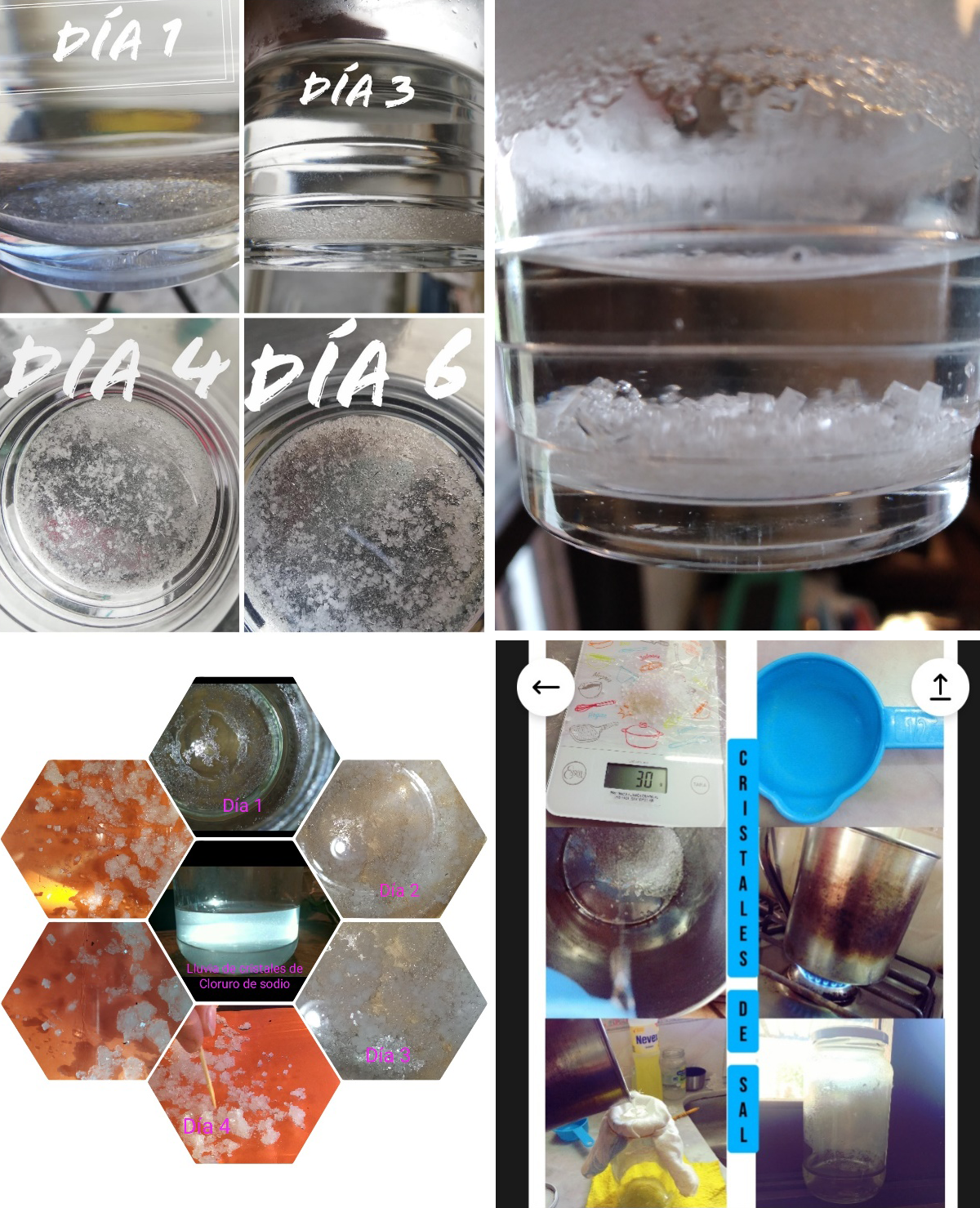 The pictures from each challenge were evaluated by the members of the team (or points in the Q&A game) with 10 points if the pictures were submitted in the proposed time (5 points for late submissions) and 10 points for the aesthetics of the result and the picture, gaining up to 20 points per challenge.

We received more than 50 submissions for the first challenge, close to 100 replies to the Kahoot Q&A challenge and around 20 entries for the challenges that required some manipulation work. The majority of the participants were children in the 8–13 age range, with some teachers encouraging their students to form a couple of groups who submitted the best results within an internal classmates competition. In the end, 16 schoolchildren completed the five challenges. The winners in the first five places received a certificate, a commemorative mug and some CNCC memorabilia as a prize, and the 25 children who completed at least three of the challenges received an electronic certificate.

The event was closed on 20 June after the fifth challenge as all schools re-opened on 1 July.

For the past six years we have continuously run the Uruguay National Crystal Growing Competition. While our seventh edition could not take place, this activity has been extremely rewarding for the organizers, who shared with the participants the uncertainty of these very difficult times. We hope that this report encourages colleagues in other regions to organize activities for schoolchildren, as every minute spent in the organization is paid back with beautiful results and thankful participants, teachers and parents. As long as one child becomes as enthralled by the world of crystallography as we are, we have accomplished our mission for one more year.

We acknowledge the support of Elisa Llambí­as from Plan Ceibal who assisted us in the implementation of the CREA Group that allowed access to schoolchildren, Facultad de Química – Universidad de la República for financial support and all parents and teachers who put in effort to help the children or students in this Challenge.