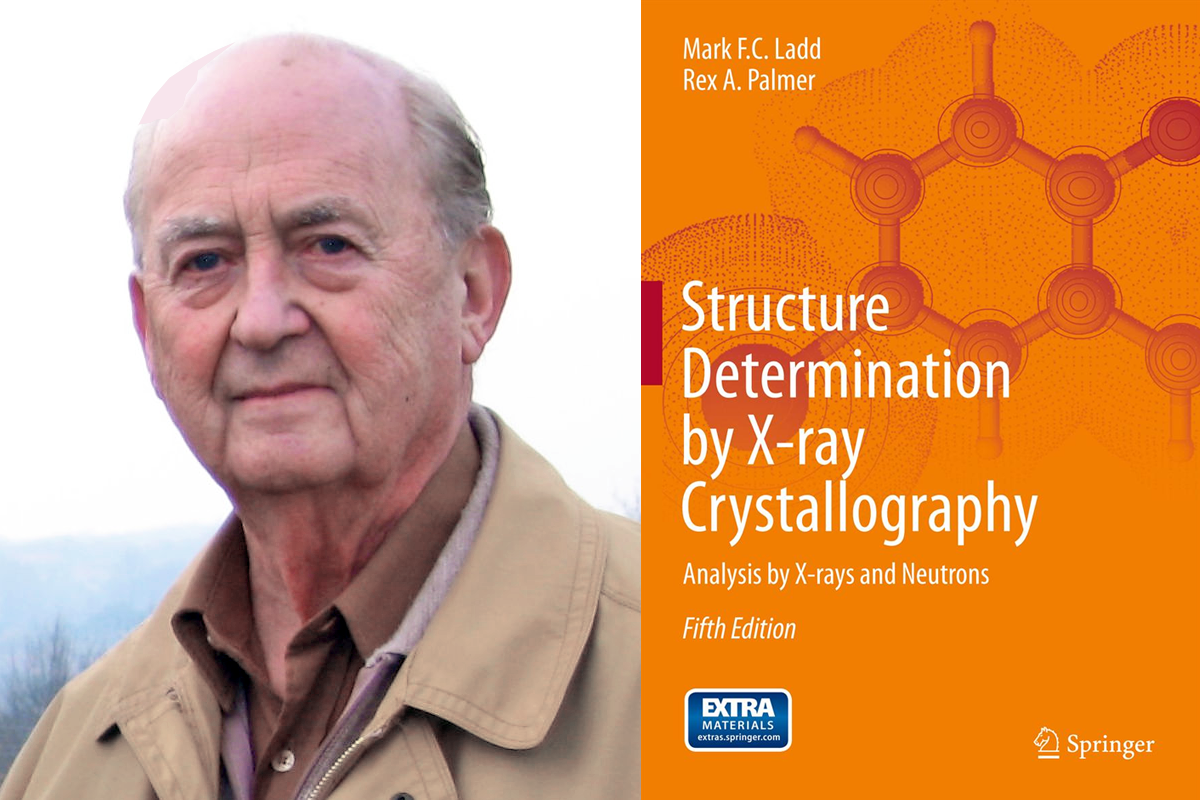 Mark Ladd’s long association with the University of Surrey, UK, goes back to the 1950s. As a young graduate, he was employed by GEC in their Hirst Research Centre in Wembley, travelling daily from Tottenham to Wembley on his trusty moped. One part of GEC was investigating the structural aspects of a range of materials considered to be of commercial interest to the company and Mark joined the X-ray crystallography group. Their remit was wide ranging and covered the development of a range of techniques to study the properties of a large range of polycrystalline and single-crystal materials and this is where his interest in the solid state and its characterisation began to evolve.

He may well have stayed at GEC had it not been for developments which were taking place in Higher Education. In 1956 the then Battersea Polytechnic, following a government White Paper, became one of the Colleges of Advanced Technology. In keeping with this advanced technology remit a new department was created “Chemical Physics and Spectroscopy” under the headship of Professor Victor Griffiths. “Griff” as he was always known was keen to recruit academic staff who had good experience of industry. It is not clear how “Griff” and Mark Ladd first met although “Griff” was well known for having a wide net of industrial contacts, but Mark always remembered his first meeting over a cup of tea in a café in Battersea Park Road. Soon after, he was on the teaching staff of the new CAT as a junior lecturer. The new department was situated in an annexe some distance away from the main college in an old school building in Falcon Road, Battersea, which resembled a rabbit warren. New staff were not given offices and the whole arrangement was very open plan.

“Griff” was always keen that his staff had the opportunity for postgraduate study and in 1958 Mark registered for a PhD at Birkbeck College on a part-time basis working on the crystal structure of euphenyl iodoacetate with Dr C. H. Carlisle as his supervisor. There was little X-ray diffraction equipment available at Falcon Road so most of the experimental work was carried out at Birkbeck College. In his spare time away from teaching duties, Mark would travel to Birkbeck to carry out the experimental work setting up multiple film packs on a Weissenberg camera. “This was hard work going back and forth to Birkbeck but fortunately the exposures often took a few days so I could leave them running with the technical staff at Birkbeck looking after them”. Later in his career he loved to explain to students the real labour of love to get a set of X-ray intensity data measured by eye with a calibrated film strip coupled with the necessary scaling from successive films.

In the early 1960s the college had purchased a new computer, an Elliot 503, and this to Mark’s delight was sited at Falcon Road. He taught himself ALGOL which was the only programming language available and was able to carry out some of the calculations required for his research. Unfortunately, the relatively small capacity of the machine and its lack of availability during the day meant that some of the long calculations had to be performed overnight. Three-dimensional electron density maps required intermediate summations to be output on punched paper tape which then had to be subsequently re-input and Mark had a camp bed installed so that he could keep track of all the calculations. His PhD was awarded in 1965.

Apart from his teaching duties in his own department, Mark was keen to interact with other departments at Battersea so when the head of chemistry asked if he would like to “do something on crystallography” for a final year physical chemistry course he jumped at the opportunity. “When I asked how many lectures I could have, back came the reply, “just one””. But he did it, it was done at a fast pace with a lot of detailed handouts but it also gave him the opportunity to advertise the new MSc course in crystallography which he was in the process of organising.

In 1968, the college was granted its royal charter and it moved to Guildford as the University of Surrey. The departmental name was changed to Chemical Physics, and Mark was charged with organising the layout of the department. “if it was going to be done, it had to be done properly. I remember going to see “Griff” with my requests for equipment. He would disappear to see someone he knew from industry and use his very persuasive powers to find either money or second-hand equipment”. The results of his efforts were fully equipped teaching and research laboratories with a complement of single-crystal cameras, powder diffractometers and a four-circle Siemens single-crystal diffractometer. In addition, there was a crystal optics laboratory and a well-resourced model room. The geographical position of Chemical Physics within the campus allowed the setting up of interactions with the departments of Metallurgy, Physics and Chemistry and the proximity of organisations such as the Royal Aircraft Establishment allowed the MSc course to be run on a part-time as well as a full-time basis.

As Head of Department and Reader in Chemical Crystallography Mark was always committed to chemical physics as a separate discipline and to this end, he made sure that all the undergraduate and taught postgraduate students had the opportunity to study mathematics, “proper maths” as he called it.

At this time, there was little or no opportunity to use computers to enhance lectures so all visual aid material was constructed by hand and he produced a large number of expertly drawn transparencies to explain the many aspects of crystal geometry and symmetry as well as producing a collection of some 300 35-mm photographic slides. Fancy automatic slide projectors did not exist or were too expensive, so he acquired an ancient slide projector which was brought along to his lectures.

The 1970s were a time of change. Personal computers were evolving, and Mark saw this as a real opportunity to enhance the chemical physics degree. Within this framework, he developed the concept of two distinct themes, the science of measurement and the science of structure. The former was based around the use of microcomputers as a means of monitoring and controlling a range of scientific processes. The latter expanded the solid-state themes into studies of surface structure, electron diffraction and crystal growth in collaboration with the metallurgy department.

In 1981 the Higher Education sector in the UK suffered severe financial cutbacks. Several departments at Surrey were closed and Chemical Physics was subsumed into Chemistry as a sub-department although still retaining its independence and academic head. However this gave Mark the opportunity to form stronger links with the various synthetic chemistry groups which were further strengthened when he persuaded the university to purchase a new Enraf–Nonius CAD-4 diffractometer and he got great pleasure in persuading many PhD students in these groups to think about including structure determination of some of the molecules that they were synthesising.

However, as time progressed numbers of students on both the undergraduate chemical physics and taught masters course started to decline and eventually the university decided to close both courses. It was with great sadness that Mark agreed to this although he did persuade the chemistry department that some of the chemical physics modules would make ideal final-year options and he continued to contribute to these.

Over his long career Mark authored or co-authored many textbooks. The first of these, Practical Radiochemistry, was co-authored with W. H. Lee, a physical chemist working in the chemistry department at Battersea. This was the start over several years of a whole series of books covering physical chemistry, structure and bonding, symmetry in molecules and crystals, and structure determination by X-ray crystallography (with R. A. Palmer). Even after retirement he was insistent that the textbooks should be kept up to date. Many underwent subsequent revisions with new sets of problems and computer-based material which was made available on an accompanying website.

Outside of the university Mark was passionate about music. He played the double bass as a member of the Croydon Symphony Orchestra and also played the viola. Students undertaking some of the practical modelling classes which he supervised would find a classical melody playing quietly in the background as “relaxation” for them. None of the students dared ask whether they could have something a bit more modern!

He became interested in Doberman dogs after a friend gave them their first Doberman. This developed into showing the animal at Crufts where it won best in breed and was the start of more than a hobby. Mark moved into breeding Dobermans, importing animals from the USA and eventually producing a book on Doberman genetics. He was also president of the Surrey Doberman Society for several years. The first that anyone knew about the developing interest in dogs was when one was proudly brought into the department much to the anxiety of the departmental secretary, not a dog lover. Feeling that she had to say something she asked Mark what the name of the animal was. Mark with his usual attention to detail came out with the long Kennel Club registered name. “I shall never remember that said the secretary, the dog is brown in colour, I shall call him Mr Brown”. From that day on, everybody in the department, staff and students knew Mr Brown who used to sit quite happily in the corner of Mark’s office.

At the age of 80, and indicative of his adventurous spirit, he and his wife decided to swap the comfort of suburban Farnham to a more remote existence in Bramshott where he continued with his writing and he was often to be found in the chemistry department talking about some ideas about a new book he was planning.

Sadly, declining health curtailed many of his activities although he was still active in writing and his final book, The Essence of Crystallography, was published at the end of 2019.

He lost his beloved wife of 69 years, Val, only five weeks before he died and he leaves two sons, Tony, a Professor in the Chemical Engineering Department at the University of Florida, USA, and Nick, a Church of England Minister.