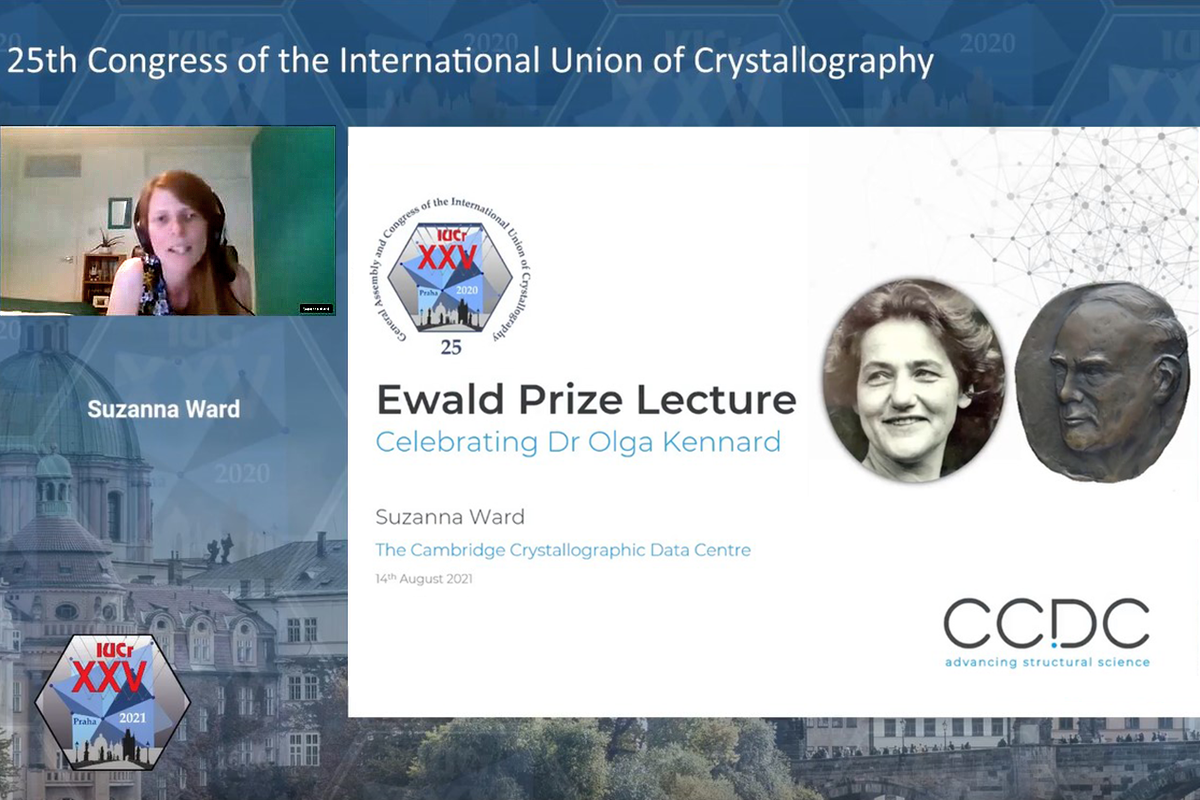 The 12th Ewald Prize acceptance Lecture was presented on behalf of Dr Olga Kennard by Dr Suzanna Ward of the CCDC.

The 12th Ewald Prize and Lecture at IUCr25

The 12th Ewald Prize had been awarded in 2020 to Dr Olga Kennard (Cambridge, UK) for her invaluable pioneering contribution to the development of crystallographic databases, in particular the Cambridge Structural Database (CSD), which as she early foresaw, has led to the discovery of new knowledge which transcends the results of individual experiment. Her own surveys using the CSD were fundamental in the development of crystal engineering, and are outstanding examples of the use of crystallographic databases as an essential tool for analysis and prediction. As founder of the CSD, director of the Cambridge Crystallographic Data Centre (CCDC) over decades, and being involved in the founding of the Protein Data Bank (PDB), Olga Kennard has made a fundamental impact on the development of modern crystallography (see the report in a previous issue of the IUCr Newsletter).

The opening ceremonies of IUCr Congresses traditionally feature a lecture by the Ewald Prize awardee. The IUCr25 ceremony on the evening of Saturday 14 August 2021 was hosted by the IUCr President Professor Sven Lidin. The Lecture was presented on behalf of Dr Olga Kennard by Dr Suzanna Ward of the CCDC (see screenshot above) and can be viewed here.

After the acceptance lecture, it was remarked in the chat by Dr Catherine Lawson, a structural biologist at the Department of Chemistry and Chemical Biology of Rutgers University, USA: “Thank you for this wonderful overview of Olga Kennard’s work.” Suzanna Ward responded “Thank you for listening, such an inspirational lady. I hope I did her justice.” I think that Suzanna Ward truly did do her justice, and, as Suzanna drew attention to it, one can view Olga Kennard’s wonderful lecture looking back, and looking forward, that she presented at the 50th anniversary of the CSD in 2015, at the age of 91. Her lecture can be viewed here, from which Fig. 1 is a screenshot of the opening of her lecture.

“The Croatian Crystallographic Association and I owe a lot to Olga Kennard and F. H. Allen for their strong support and the benefits disseminating and implementing of the Cambridge Structural Database over the territory of South-East Europe. The CSD has been used extensively in teaching and research.”

“Olga had great vision, good business sense, and remarkable tenacity; without those attributes, the CSD would never have survived, never mind become the tremendous resource that it is today.”

We all might wonder, as I did: Why the wait for her to receive an Ewald Prize? Well, I suppose reaching the millionth structure in the CSD does rather make all crystallographers sit up and, quite simply, burst into applause. The heartiest congratulations from all of us to Dr Olga Kennard.

In my opening introduction to her Keynote Lecture, I summarised Dr Loes Kroon-Batenburg’s extensive research interests and achievements based at the Structural Biochemistry lab of Utrecht University in the Netherlands. She had worked there for 20 years with her husband Jan Kroon on carbohydrate crystal structures and hydrogen bonding. Her scientific interests expanded to include biological crystallography and data science as well as structural studies and fibre diffraction of cellulose and wood fibres. Her interests also cover software development, for example the EVAL diffraction data processing method and computer program, and more recently diffuse scattering of protein crystals. Loes has served throughout the six-year term of the IUCr Diffraction Data Deposition Working Group (2010 to 2017) and subsequently the first four years of the IUCr Committee on Data. Loes is leading the IUCr Journals’ initiative launching the IUCrData journal’s new section Raw Data Letters.

Her Keynote spanned macromolecular crystallography, chemical crystallography, powder diffraction and diffuse scattering. In several places Loes focussed on macromolecular crystallography with detailed reuse of raw data examples that she made to illustrate the FAIR data principles in practice as well as some specific, quite serious, problems of raw data reuse that can exist such as totally incorrect beam centre or severely incomplete metadata. FAIR is the acronym used by all science communities these days to measure their progress in organising effective data reuse. This requires that data be findable, accessible, interoperable and reusable in modern science practice. Her conclusions slide is shown in Fig. 2.

There were questions to Loes both from the chat and from the audience present in Prague (Fig. 3). These included recording of a test powder diffraction from Saulius Gražulis and neutron data archiving from Alison Edwards. Time ran out before the intricate question of who owns the raw data (experimenter, the PI, facility, university or funding agency) could be explored, a question that is important for determining release to the public or data deletion rights. These rights may also be different in different countries.