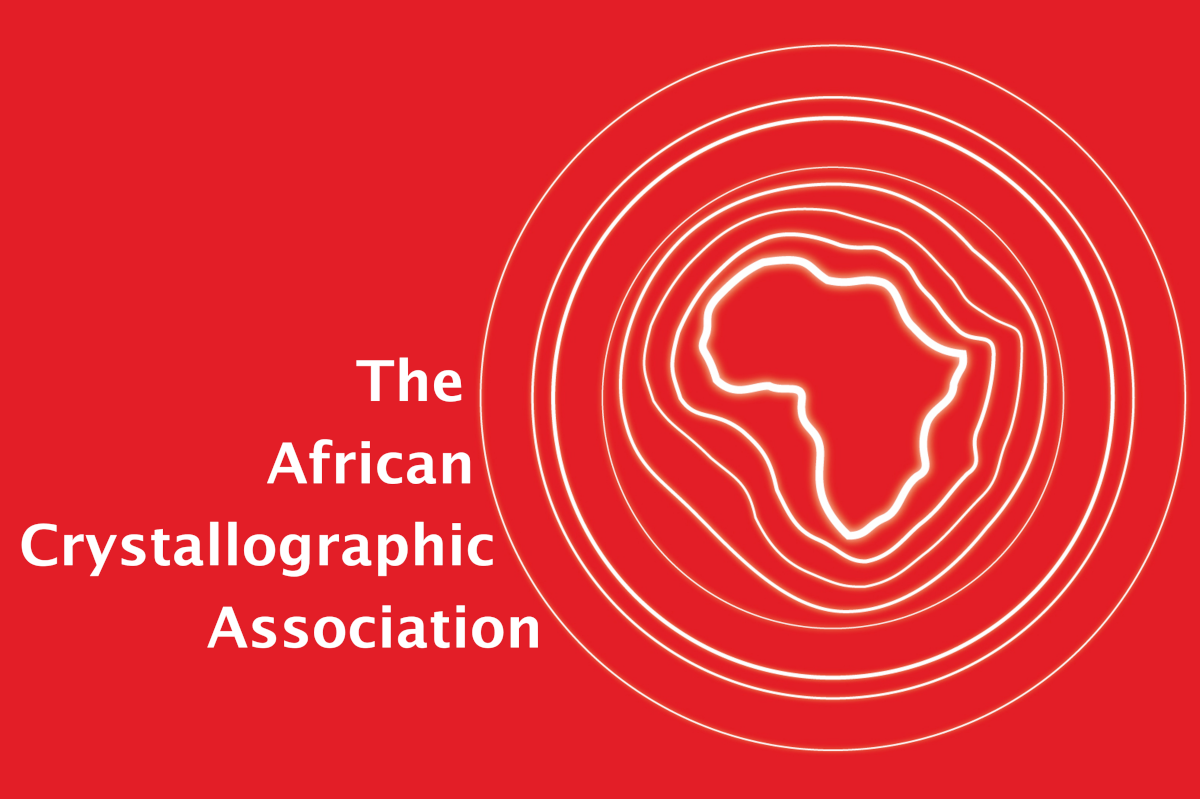 After many years of crystallographic activity on the African continent, on 17 November 2021, we witnessed the birth of the African Crystallographic Association (AfCA). This follows years of work by many groups and individuals, including the IUCr Africa Initiative, the IUCr Outreach Program and the AfCA Steering Committee, with the collaboration of institutions like the United Nations Educational, Scientific and Cultural Organization (UNESCO) and the International Science Council (ISC) and many companies like Bruker and the Cambridge Crystallographic Data Centre (CCDC).

The Association was launched during the online ePCCr meeting, organised as a joint conference with the African Light Source and the African Physical Society. The ePCCr meeting attracted 205 delegates from 37 countries, including 17 African countries. AfCA was officially constituted during a special session at this online meeting, chaired by Delia Haynes, the chair of the Executive Committee of the AfCA Steering Committee.

The session opened with addresses from the IUCr President, Hanna Dabkowska, and the President of the European Crystallographic Association (ECA), Marijana Đaković. Hanna indicated how, since 2011, under the presidencies of Gautam Desiraju (2011–2014), Marvin L. Hackert (2014–2017) and Sven Lidin (2017–2021), the Union has advanced the promotion of crystallography in Africa. She hopes AfCA will apply for regional membership of the IUCr during the 26th IUCr Congress in Australia. In her address, Marijana mentioned that several African countries with active crystallography communities have been members of the ECA, and the ECA has been a strong support on the road to forming AfCA.

Andreas Roodt (South Africa), Claude Lecomte (France) and Patrice Kenfack Tsobnang (Cameroon) then gave presentations. Andreas Roodt, a past president of the ECA and the first chair of the AfCA Steering Committee, outlined the history and development of crystallography on the African continent. He particularly highlighted the key role played by Claude Lecomte, as well as the importance of meetings held on the African continent, including ECM21 in South Africa and ECM24 in Morocco, as well as the important meetings held during the International Year of Crystallography in 2014. Claude Lecomte then discussed the development of crystallographic activities in Africa, focusing on the installation of diffractometers in several African countries, and well as the highly successful OpenLabs. He finished by presenting a new project involving remote access to diffractometers for the collection of diffraction data. Finally, Patrice Kenfack Tsobnang spoke about the Pan African Conferences on Crystallography, the PCCr series. He mentioned that the idea to launch these conferences arose from the declaration signed during the IYCr2014 Pan African and South African Summit meeting, and how the meetings contribute to growing the African community working in crystallography. PCCr1 and PCCr2 were held in Cameroon in October 2016 and Ghana in January 2019, respectively, and PCCr3 is planned to take place in Kenya in January 2023. 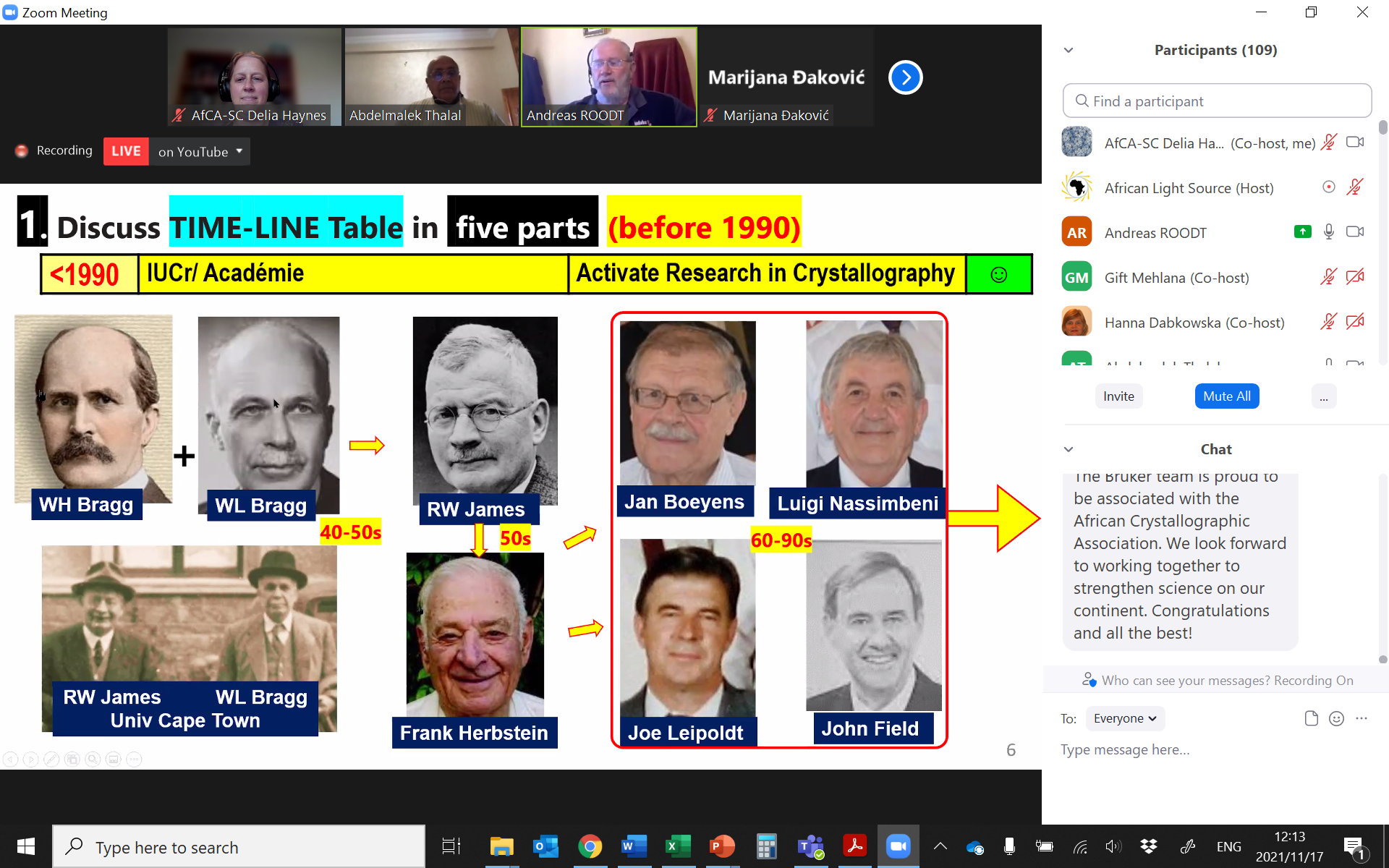 A slide from the presentation given by Andreas Roodt, outlining the history of crystallography in Africa.

These inspiring presentations were followed by the first AfCA Council meeting. Whilst it would have been fantastic to hold this meeting in person, one advantage of the online meeting format is that representatives of crystallographic societies and groups from across the continent were easily able to participate in the meeting. Representatives from the founder members in Algeria, Benin, Cameroon, Congo, Côte d’Ivoire, Democratic Republic of Congo, Egypt, Gabon, Ghana, Kenya, Nigeria, Morocco, Rwanda, Senegal, South Africa, Tunisia and Zimbabwe were present. These representatives voted first to approve the constitution and by-laws of AfCA and to officially constitute the Association. This was followed by a vote to approve the proposed AfCA Executive Committee. Both votes were unanimous.

The inaugural AfCA Executive Committee. The committee of nine includes members from the five regions of Africa as defined in the constitution.

The session closed with presentations from Professor Walter Oyawa from the International Science Council, and Dr Jean-Paul Ngome Abiaga from UNESCO. The event was attended by representatives from the European, American, Asian and Latin American Crystallographic Associations, as well as the African Light Source, the African Physical Society and the African Academy of Sciences. Many crystallographers from the African continent and across the globe, also joined this important occasion, as well as representatives from CrystEngComm, Crystal Growth & Design, CCDC, ICDD, Bruker and Rigaku.

Attendees at the AfCA session at ePCCr.

The birth of the African Crystallographic Association was a significant and historic moment, both for science in Africa and for crystallography worldwide. In the words of the ePCCr chair, Gift Mehlana, which he shared at the conference closing ceremony:

"Just like a baby, the AfCA will learn to sit, crawl, stand up, walk and run. During all these stages, AfCA will need maximum support from the crystallographic community, African governments and the world at large. African governments must support science and, in particular, crystallography through the provision of infrastructure and equipment that is needed to carry out meaningful research. Crystallography has the power to change people’s lives."

We hope to see AfCA go from strength to strength as it aims to fulfill its objectives. These are to

The new AfCA Executive Committee would like to extend particular thanks to the three ex officio members of the AfCA Steering Committee, Alessia Bacchi, Claude Lecomte and Michele Zema. They have been incredibly generous with their time and their considerable experience, and this point would not have been reached without their help.

Thank you to all those who contributed to this great event to enable this continent, with abundant resources in minerals and mining, materials science, green chemistry, biotechnology and archaeology, to have its crystallography association.