The borders of hydrogen bonds

The problem of what interactions should be considered 'hydrogen bonds' is as old as the field of hydrogen bond research. In the 1920s when the field was in its infancy, liberal views held sway and borders were open. In the late 1930s, rigid and exclusive hydrogen bond definitions became the order of the day and remained practically unchanged (though not unchallenged) for about 50 years. Typical definitions held that in a hydrogen bond X-H···A, X and A must be 'very electro-negative atoms' and that H···A or even X···A must be significantly shorter than the sum of the van der Waals radii. In the 1980s and 90s, conflicts with experimental data reached such a level that stringent criteria were increasingly ignored by researchers. A modern and useful definition of a hydrogen bond has not yet been found. In an informal meeting arranged by Roland Boese in Essen on September 19, 2000, the current state of this matter was explored to determine where borderlines should be drawn between interactions that are of the 'hydrogen bond type' and interactions that are clearly not hydrogen bonds. (Participants included R. Boese, G.R. Desiraju, A. Gehrke, R. Goddard, S. Harder, M. Kirchner, C. Lehmann, M. Mazik, T. Steiner, R. Sustmann.)

It was agreed that as a primary requirement, a hydrogen bond must involve a hydrogen atom, however trivial this might sound. The question of whether the term 'hydrogen bond' should be applied only to interactions formed by protic X-H groups (where H carries a positive partial charge relative to X), or be extended to include interactions involving hydridic X-H groups of opposite polarity, is more controversial. In fact, structural and functional features of Xδ+-Hδ-···Aδ+ interactions (e.g. agostic interactions, diboranes, 'inverse hydrogen bonds', etc.) in many significant ways parallel 'normal' Xδ-Hδ+···Aδ-. hydrogen bonds. Nevertheless, the electronic nature of the interactions are different, being formally three center.four electron in one case, and three center.two electron in the other. This difference makes it possible to define a borderline on a chemical basis and term as a proper 'hydrogen bond' only the four-electron interaction. 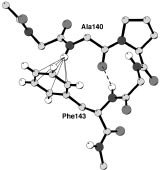 Figure 1: Example of a hydrogen bond type that does not fit early hydrogen bond  definitions: typical N-H···Ph interaction in a protein (from T. Steiner, G. Koellner, J. Mol. Biol., 305, 2001, 535).
However, the use of the three center.four-electron condition as a stringent criterion is inappropriate because it would exclude such acceptors as the π-faces of benzene rings (see Figure 1). In fact, it is only required that the acceptor is a sterically accessible concentration of negative charge.

Most difficult to define is the transition to pure van der Waals forces. If donor or/and acceptor are only weak dipoles, such as in typical C-H···A or X-H···Hal-C interactions, positive directionality was again accepted as the primary criterion for the definition of a hydrogen bond. If the distance fall-off of the electrostatic component is fast, a dividing line can only be drawn subjectively. A possible borderline that can be drawn between dipole-quadrupole and quadrupole-quadrupole interactions was discussed.

It is currently fashionable to assign hydrogen bond character to a given contact by locating 'bond-critical points' in electron density distributions. After intense discussion, the group concluded that the existence of a bond critical point is a necessary though not a sufficient criterion for hydrogen bonding. It appears that a simple definition of the hydrogen bond is not possible. The complexity of the phenomenon, the large number of different contributing factors and the gradual transition to other types of interactions, does not permit the definition of clear borderlines. Once the openness of borders is acknowledged, a more general view of hydrogen bonding becomes possible. It is noteworthy that throughout the discussion, the 'van der Waals cutoff '-criterion was not mentioned. This criterion, which ruled the field for decades, is now completely abandoned - clearly a sign that the field has evolved.