To commemorate the 100th anniversary of the birth of Professor K. Banerjee, the pioneer crystallographer of India, a Symposium on Recent Trends in Crystallography and its Applications (SRTCRA 2000) was organized at the Indian Association for the Cultivation of Science (IACS) in Calcutta, on September 15-16, 2000. The inaugural ceremony was attended by more than 200 participants including J.R. Helliwell, U. of Manchester, students, and family members of Prof. Banerjee. S.K. Sikka, Chairman of the Indian National Committee on Crystallography and Director of the Solid State & Spectroscopy Group of Bhabha Atomic Research Centre (BARC) of Trombay, opened the Symposium. D. Mukherjee, Director, IACS, discussed the role of crystallography in interdisciplinary research and the heritage of IACS including the contributions of C.V. Raman (Nobel Laureate), M.N. Saha, K.S. Krishnan, K. Banerjee, S. Bhagavantam and many others. The Chairman of the Organizing Committee, S.P. Sengupta, a member of the IUCr Commission on Powder Diffraction (CPD), described how Banerjee initiated modern crystallographic research in India and played a key role in establishing active research centers across the country. Messages from eminent crystallographers including H. Hauptman, J. Karle, M.M. Woolfson, and H. Schenk revealed deep appreciation of Banerjee’s contributions to the development of direct methods. A.K. Sharma, President, IACS, emphasized the importance of crystallographic research in the current context of the genome project. To mark the occasion Professor Sharma announced the publication of 'A Collection of Professor Banerjee's Work', including research publications and lectures on scientific policy, and unveiled a bronze relief of Banerjee at the IACS campus. 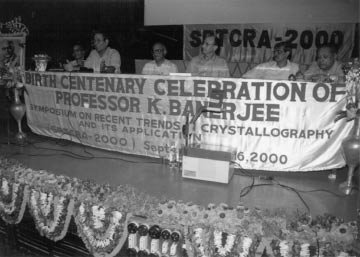 Concluding session of SRTCRA 2000.
In the opening scientific session M. Vijayan, Indian Inst. of Science, Bangalore, delivered the keynote address on the 'Structural diversity and functional specificity of proteins - A case study involving lectins'. There were 21 talks by speakers from India and abroad. In his lecture on the 'Complementarity of Neutron and Ultra-high resolution Synchrotron X-ray protein crystallography' J. Helliwell gave an overview of recent advances in the field of high-resolution and neutron protein crystallography. T.P. Singh (AIIMS) presented the threedimensional structure of phospholipase A2 and a structure-based design of its inhibitors. A. Banerjee, (Bose Inst.), A. Banerjee (IACS) and D. Mukherjee, (SINP,) discussed molecular design in living systems, reverse turns in proteins, synthetic peptides and pseudo-peptides and the crystal structure and functions of a chymotrypsin inhibitor protein isolated from the seeds of the winged bean.

The lectures by M. Mukherjee (IACS) and D. Velmurugan (U. of Madras) were on ab-initio Phasing of proteins by multisolution Direct methods and Combination of Direct Methods with Anomalous scattering/Isomorphous replacement. The topics of the last session with speakers G.D. Nigam (IIT Kharagpur) and A.K. Mukherjee (Jadavpur U.), S. Paul (North Bengal U.) and S. Gupta (IACS) covered Probability distribution functions, Crystallographic disorder and Structures of Liquid Crystals.

A special 'Reminiscences' session on Prof. K. Banerjee was arranged in the evening with some of his senior students A.R. Chowdhury, R.K. Sen, S.C. Chakraborty, K.C. Banerjee, A.K. Datta and A.K. Pant as speakers, chaired by B.S. Basak.

An Endowment fund was established by the family, students and admirers of Prof. Banerjee with a proposal for an annual lecture in his name. Professor J.R. Helliwell, the recipient of the Professor Banerjee Silver medal, delivered the first Professor Banerjee Endowment Lecture. An article based on the lecture will appear in the January 2001 issue of the Indian Journal of Physics.