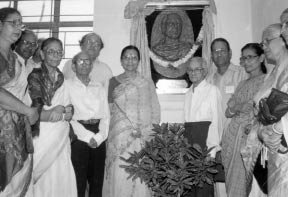 Unveiling of a bronze relief of Prof. K. Banerjee at SRTCRA 2000.
Professor Kedareswar Banerjee, a pioneer X-ray crystallographer, was born in Bikrampur, Dacca (now in Bangladesh) on September 15, 1900. In 1923, after a brilliant academic career in Dacca U. and the U. of Calcutta, young K. Banerjee joined the research group of Sir C.V. Raman at the Indian Association for the Cultivation of Science (IACS), Calcutta, a premier Indian research institute of India. He worked in various institutions including IACS, the Indian Meteorological Department, Dacca U. and Allahabad U. and finally retired as the Director of IACS, Calcutta in 1965.

Banerjee laid the foundation of X-ray Crystallographic research in India. In 1924, when only a few crystal structures had been determined throughout the world, Banerjee's work on the determination of atomic arrangements in crystalline naphthalene and anthracene received international attention. Banerjee was awarded the DSc degree of the U. of Calcutta in 1930. He had close associations with almost all the leading crystallographers of his time including W. H. Bragg, W. L. Bragg, J. M. Robertson, P. P. Ewald, J. D. Bernal, K. Lonsdale, N. V. Belov and M. Avrami. In 1933, Banerjee proposed a new approach to the crystallographic phase problem, which not only broke new ground beyond the 'trial and error' structure solution method of that time, but also heralded the extremely powerful direct methods of crystallography of the modern era. His seminal paper (Proc. Roy. Soc., 1933, 141, 188) on direct methods was cited in the Nobel Lecture of Dr. Jerome Karle in 1985.

Apart from structural X-ray crystallography, Banerjee's research pursuits covered a wide field of crystal physics. His research contributions in various fields including low angle scattering, thermal diffuse scattering of X-rays from crystals, diffraction of X-rays by liquids, jute fiber and organic polymers, structures of coal and glass, determination of the elastic constants of crystals by X-rays, theoretical modelling of the vibrational spectra of crystal lattices and some topics in crystal optics have received international recognition. Perhaps his most significant contribution to the advancement of science in India was the creation of active schools of research wherever he went leaving behind a band of young, energetic research workers who became the torch bearers of his scientific tradition.

Banerjee was elected a Fellow of the Indian Academy of Science and the National Academy of Science (N.A.Sc.). He was the sectional President for the Physical Science Group at the Indian Science Congress in 1947, Vice-President of the N.A.Sc. from 1958 to 1960 and General President of the N.A.Sc. in 1967. He was a member of the first National Commission for cooperation with UNESCO from 1947 to 1951, a member of the Scientific Advisory Committee of the Planning Commission from 1953 to 1956 and a member of the review committee and advisory boards of several National Laboratories. In 1948, he was invited as a 'Guest of Honour' to the inaugural Congress and General Assembly of the International Union of Crystallography.

Apart from being a stellar scientist, Prof. Banerjee possessed a rare and pleasing personality. He was extremely kind and affectionate yet strong in his convictions. He lived a life of noble deeds and thoughts that brought him self-composure, freedom from fear and made him a truly international scientist. On April 30, 1975 Prof. Banerjee died at Barasat, a suburb of Calcutta.