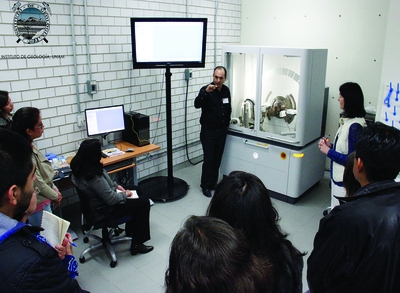 Training on the new equipment.

To celebrate IYCr2014, the Instituto de Geología (IGEOL) of the Universidad Nacional Autónoma de México (UNAM) has made an important effort to modernize its crystallographic facilities by acquiring a new multipurpose diffractometer that will join the two existing diffractometers in the X-ray Diffraction Laboratory at the Institute. New computing facilities and crystallographic software have also been acquired.

To raise awareness of the existence of this infrastructure at the national level and the potential that crystallography has to solve problems in different areas of knowledge, IGEOL organized a four-day OpenLab lasting from 18 to 21 November within its facilities at Mexico DF. The OpenLab was intended for postgraduate and postdoctoral students, and attracted 60 participants mostly from Mexico but also from other Latin-American countries.

The OpenLab was organized by the X-ray Diffraction Laboratory of the IGEOL, assisted by Fabián Durán, coordinator of Communication Science IGEOL. We invited speakers from UNAM and other research centers, as well as PANalytical technicians who offered practical training on the new equipment. The program included several lectures on the fundamentals of X-ray diffraction and on the applications of crystallography in gemology (Juan Carlos Cruz Ocampo), in cultural heritage (Xim Bockimi), in the fabrication and characterization of new materials (Marius Ramírez and Martín Hernández Landaverde), in the cement industry (Jorge Pablo González), in environmental geochemistry (Mario Villalobos Peñalosa), in biomineralization (Ábel Moreno Cárcamo), in crystal growth (Héctor Riveros Rotgé), in mineralogy (Oscar Irazaba Ávila and Teresa Pi Puig) and in ore genesis (Teresa Pi Puig). The president (José Álvaro Chávez Carvayar) and former president (Lauro Bucio Galindo) of the Mexican Society of Crystallography (SMCr) delivered lectures on the activities undertaken in Mexico during IYCr2014 and on the future of the SMCr and the Latin-American Crystallographic Association. 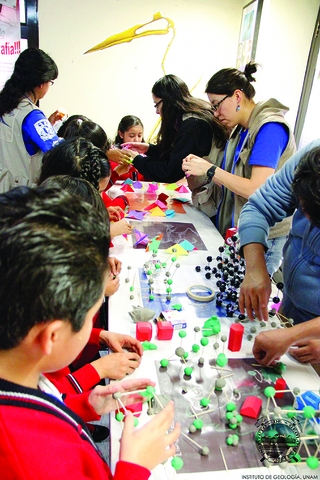 Two public outreach activities also took place, namely the screening of the film 'The Mystery of the Giant Crystals' and a lecture on Crystallography and the Origin of Life, both delivered by Juan Manuel García-Ruiz from CSIC-U. of Granada (Spain). On the afternoon of Wednesday, November 20, participants visited the Museum of Geology, a beautiful historical museum built during the early years of the last century. During the visit, guided by the team of the Museum (Luis Espinosa Arrubarrena and Julio Caballero Corona), the participants were able to witness the crystallization workshops for children offered from this year onwards by the Museum with the help of the X-ray Diffraction Laboratory team (Fernando Núñez Useche and Adriana Gómez Cruz).

During IYCr2014, the X-ray Diffraction Laboratory of UNAM has participated in two other outreach events, namely 'Encounter with the Earth' and the 'Sciences and Humanities Party', which both saw a large and enthusiastic participation from children, teens and families.

The workshop ended with the poster-prize ceremony. From the 20 posters presented, an international jury selected two prizes for graduate students, awarded to Guillermo Dolores Reyes and Laura Esmeralda Mendoza Ramos, and two prizes for Master and PhD students, awarded to Serafín Sánchez Pérez and Luisa María Mainou. During the OpenLab, the participants enjoyed excellent Mexican cuisine created by the Romero family.

According to UNESCO, Mexico has a shortfall of experts in earth sciences and crystallography so IGEOL intends to continue offering new courses to produce experts in both disciplines with good job opportunities.