Pan African Meeting and Summit of the International Year of Crystallography 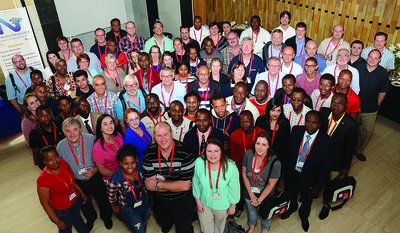 In celebration of 2014 as the International Year of Crystallography (IYCr2014) as declared by the United Nations General Assembly (UNGA; resolution A/RES/66/28), the IUCr hosted three world summit meetings during 2014, i.e. in Karachi (Pakistan), Campinas (Brazil) and Bloemfontein (South Africa).

The third world summit of the IYCr (in Africa) was hosted at the U. of the Free State (UFS) in Bloemfontein, South Africa, by Andreas Roodt, Head of the Dept. of Chemistry and President of the European Crystallographic Association (ECA). It had the ambitious theme of 'Crystallography as vehicle to promote science in Africa and beyond', and consisted of a 2.5-day conference (Oct. 12–15), followed by a 2-day summit (Oct. 15–17).

This Pan-African Meeting of the IYCr was attended by more than 100 senior researchers, early career researchers, postdoctoral fellows and students representing more than 40 research groups from 32 universities and 22 countries, primarily from Africa and Europe, and included decision makers. All the delegates were in agreement that there is a clear sub-optimal level of regional collaboration in science which requires immediate action, and the view was expressed that supporting the broad discipline of crystallography will significantly contribute to promoting science in general. 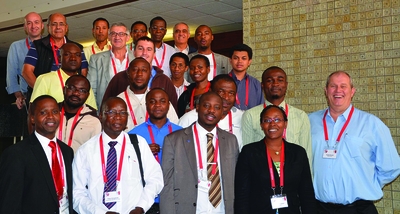 The meeting welcomed delegates from across Africa, including a number of presidents and representatives of African Crystallographic Associations, and aimed to showcase the current state of crystallography on the continent. Among those attending were Thomas Auf der Heyde, the acting Director-General of the Dept. of Science and Technology (South Africa); Gansen Pillay, acting CEO of the National Research Foundation (South Africa); Jean-Paul Ngome Abiaga, International Basic Sciences Program, UNESCO (Paris, France); Prosper Kanyankogote, Vice-chancellor, U. of Kinshasa (DRC); Santiago Garcia-Granda (Oviedo, Spain), representative of the Executive Committee of the IUCr; Michele Zema (IUCr/Pavia, Italy), Project Manager of IYCr2014; Abdelmalek Thalal and Habib Boughzala, Presidents of the Moroccan and Tunisian Crystallographic Associations, respectively; and Petrie Steynberg (Sasol Industry, South Africa). 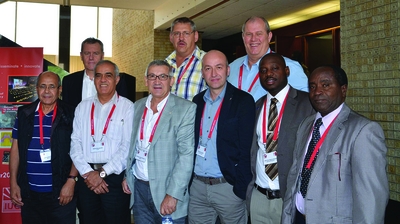 At the conference, the focus was on the discussion of the current state of crystallography in Africa, in particular as presented in 15 keynote lectures, but also in lectures by some 15 young scientists from the English-, French- and Arab-speaking African countries. There was also ample time for presentation of research at poster sessions by students and young scientists, and selected poster presenters had the opportunity to present their work in short 'flash' presentations. 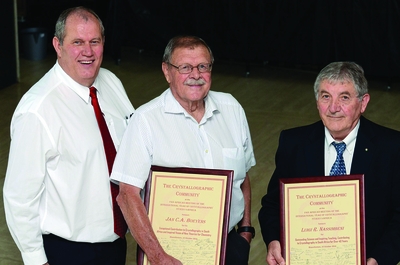 Two South African icons, Jan Boeyens (U. of Pretoria) and Luigi Nassimbeni (U. of Cape Town), were also honoured for their contributions towards crystallography over the past number of decades.

At the Summit, the focus was on how to utilize crystallography as a vehicle to expand science in Africa, with inputs from established and young scientists and policy makers. Two panel discussion sessions between young scientists on the one hand and senior decision makers on the other yielded an interesting discourse. 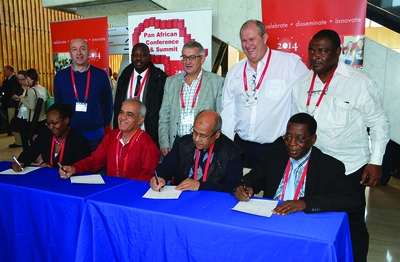 First signatories of the Declaration at IYCr2014Africa.

Highlights of the Summit were the issuing of a Declaration to decision makers in the international science arena such as the IUCr and UNESCO and in Africa and Europe, signed by 73 individuals, and the establishment of a steering committee to cement the formation of an African Crystallographic Association. The steering committee currently has representation from 18 African countries and envisages the expansion thereof in the immediate future.

Key points put forth in the Declaration were to:

Moreover, the establishment an African IYCr Cooperation Fund, facilitated by the IUCr and UNESCO, was also proposed, which is envisaged to support actions such as:

The overarching feedback from the meeting was positive but it was also unanimous that more interaction between African colleagues is urgently needed to expand on the ambitious theme, i.e. to indeed 'use Crystallography as a vehicle to expand science in Africa and beyond'.