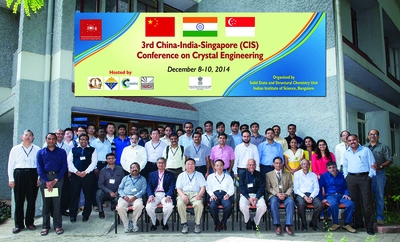 The 3rd China-India-Singapore Conference on Crystal Engineering was conducted successfully at the Indian Institute of Science, Bangalore, between 8 and 10 December 2014. This meeting was held as part of the IYCr2014 celebrations and was supported by the Department of Science and Technology. The Royal Society of Chemistry, the American Chemical Society and the IUCr also supported the meeting.

There was a special session on journals where the role of IUCrJ; Acta Crystallographica Sections B, C and E; Crystal Growth & Design and CrystEngComm on the one hand and the Journal of the American Chemical Society and Angewandte Chemie on the other were highlighted. Many senior editors of one or more of these journals were present at the meeting.

In keeping with the broad theme of IYCr, it has been decided to morph this meeting into the South and East Asia Conference on Crystal Engineering (SEACCE) and include countries like Bangladesh, Malaysia, Nepal, Pakistan, Sri Lanka, Thailand and Vietnam. This development is very much in adherence with the idea of bringing nations together through science.

It is proposed to hold the next meeting in 2016 in Nepal or Bhutan, which are neutral territories, thereby facilitating the attendance of a large number of workers in our politically sensitive region.