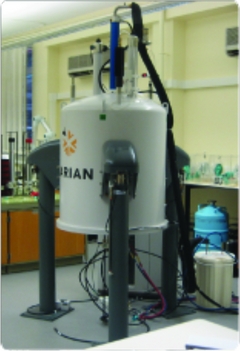 9.4 T wide-bore magnet used in an NMR spectrometer for work on solids (proton resonance at 400 MHz).

As a result of a submission to the IUCr meeting in Montreal last August (2014), a new Commission has been established to cover magnetic resonance methods of studying crystallography. Actually, although in a sense new to IUCr, NMR has been known as a method of obtaining detailed molecular-level information on crystalline materials for about 60 years. For instance, in 1948 (only three years after the discovery of the NMR phenomenon) Pake reported the measurement of the internuclear distance between protons in water molecules involved in gypsum. A year later, Gutowsky et al. commented that 'the development of experimental methods for observing nuclear magnetism has provided a means of investigating certain aspects of molecular and crystal structure'. However, much higher resolution was attainable for solutions than for solids, so for several decades, the former dominated NMR work and the latter languished. This situation changed with the development of cross polarization, magic-angle spinning and high-power proton decoupling in the mid 1970s. This combination of techniques resulted in much higher resolution for solids, so that applications to crystalline materials have become common. The crystallography community in general has been slow to adopt NMR as one of its key techniques, so NMR and diffraction methods have largely involved separate communities until recently. However, it has become obvious that the complementarity of these methods requires a closer interaction of their practitioners, so the formation of a new IUCr commission at this point makes sense. The development of computational methods for refining structures from NMR data has added urgency to this matter.

Participants in the fourth SMARTER meeting.

The requirement for closer integration of NMR with other methods of studying crystalline materials was highlighted by a short article in the IUCr Newsletter in 2005, following an International School on Crystallography at Erice the previous year, which had included lectures on NMR. It should be noted that the Commission will also deal with other magnetic resonance techniques, such as ESR/EPR.

It is worth summarizing here just a few of the salient points about NMR crystallography for the benefit of newcomers to the subject:

The sheer versatility of NMR should also be emphasised. This arises from (a) the fact that nearly all the elements of the Periodic Table have a suitable isotope for study (and the frequency ranges for their signals do not, in general, overlap) and (b) there is a wide variety of experiments which can be performed by varying the radiofrequency pulse sequences used. Further details can be seen in a number of books. There is, for example, a recent (2009) handbook on 'NMR Crystallography' (ISBN 978-0-470-69961-4). A series of 'SMARTER' conferences has been instituted on this topic, the fourth being held in Durham (UK) in September 2014; these are now sponsored (inter alia) by IUCr.

The new Commission is chaired by Francis Taulelle (France), with joint secretaries Robin Harris (UK) and Manish Mehta (USA). Other current members are Tatyana Polenova (USA), Marek Potrzebowski (Poland) and Rod Wasylishen (Canada), with IUCr consultants Gautam Desiraju (India) and João Rocha (Portugal). Further members are to be added. Details of the objectives and activities of the commission can be found on the IUCr web site under www.iucr.org/iucr/commissions/nmr-crystallography. Comments and queries about the plans of the Commission can be addressed to r.k.harris@durham.ac.uk or mmehta@oberlin.edu.