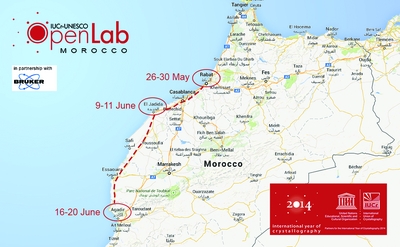 The IUCr-UNESCO OpenLab Morocco, organized in partnership with Bruker France, was held as a travelling lab making use of Bruker portable instrumentation (an X2S single-crystal diffractometer and a D2 powder diffractometer). Three stops were made, the first in Rabat, then El Jadida and finally Agadir. The overall local organization was done by the Moroccan Crystallographic Association (AMC). 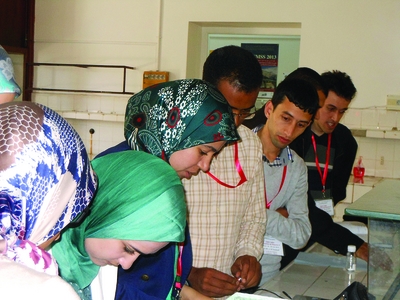 The travelling lab at its first stop in Rabat.

The first stop at the Faculty of Sciences, U. Mohammed V-Agdal in Rabat on 26–30 May, 2014, was attended by 36 PhD students and postdocs from the Universities Moulay Ismaïl Meknès, Mohammed V-Agdal Rabat and Hassan II Casablanca. Students were selected from a long list of applications based on their CVs by the scientific committee. Besides the IUCr and Bruker, the OpenLab in Rabat was supported by the Faculty of Sciences, the U. Mohammed V-Agdal and the company Radaco. Lahcen El Ammari and Mohamed Saadi chaired the local organizing committee. The OpenLab was opened by Abdelmalek Thalal (U. Marrakech, President of the AMC), who also gave a lecture on crystal symmetry. Lectures and hands-on tutorials were held by professors from different Moroccan universities (A. Aatiq, S. Benmokhtar, M. Berraho, A. Boukhris, A. Brittel, L. El Ammari, A. El Bouari, A. Laknifli, M. Saadi, K. Yamni and D. Zakaria), together with Loïc Le Dréau from Bruker France and Michele Zema from the IUCr. 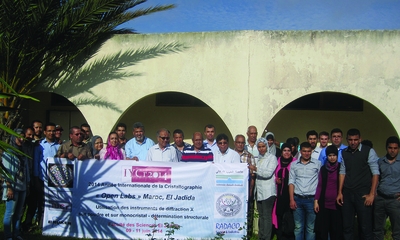 Group photo at the second stop in El Jadida.

The travelling lab made its second stop at the U. Chouaïb Doukkali in El Jadida from 9–11 June. Also in this case, 36 PhD students and postdocs from El Jadida, Casablanca, Fez, Tangier, Agadir and Meknès attended the training courses, held by eight of the lecturers and instructors mentioned above, from El Jadida, Casablanca, Rabat and Marrakech, as well as Loïc Le Dréau from Bruker France. The local organizing committee was chaired by Driss Zakaria, and the OpenLab received support from the Faculty of Sciences and the University. 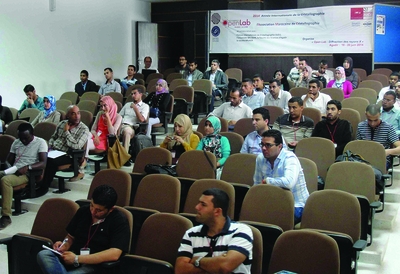 Participants at the last stop in Agadir.

The third OpenLab, locally organized by A. Boukhris, was held on 16–20 June at the U. Ibnou Zohr in Agadir and attended by 70 PhD students and postdocs from Morocco, Algeria and Tunisia. In addition to financial support from the IUCr and logistical support from Bruker, the University contributed financial, human and material resources. As at the other venues, the programme began with formal speeches followed by lectures on crystal symmetry, X-ray diffraction, refinement and structure solution and data collection, and practical training on the diffractometers from some of the aforementioned lecturers and instructors together with M. Belhachemi.

The gender split across all three OpenLabs was 70% male and 30% female.