On the path of my noble ambition to become an expert crystallographer in Benin: an Italian voyage of discovery 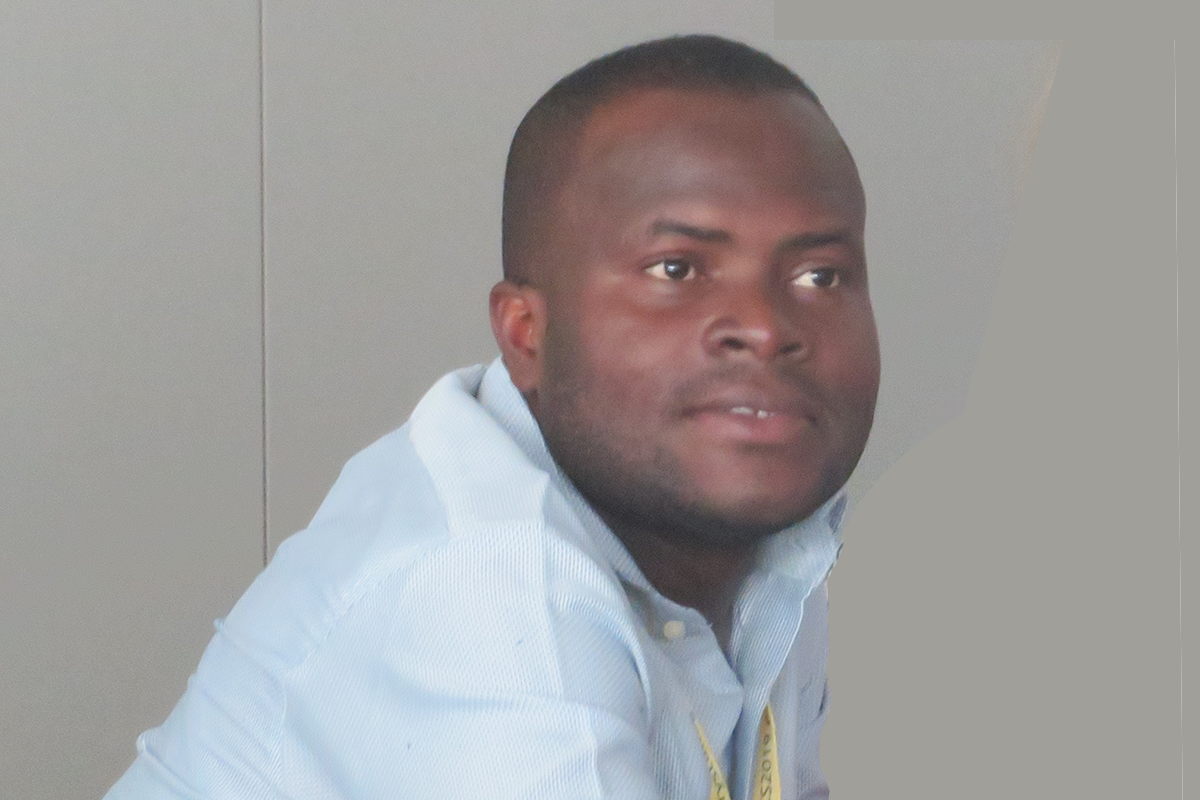 Here, I do not claim to appear or already be considered as an expert crystallographer. Far from it! In fact, this article simply aims to share a series of unforgettable training experiences on my road that will gradually lead me to become, one day, an expert crystallographer following my elders in science, who still make me want to learn more and more every day on the uses of X-ray techniques.

Thanks to the invaluable help and invitation from Sophie Cazalbou and Audrey Tourette of the “Phosphates, Pharmcotechnie et Biomatériaux” research team at the Interuniversity Center for Research and Materials Engineering (CIRIMAT) in Toulouse, France, I spent two months at their facilities in 2016. It was the first time I had come into contact with a powder X-ray diffractometer, and I was trained by Cedric Charvillat, Head of the X-ray Diffraction platform. This short, self-funded internship allowed me to complete my PhD thesis as quickly as possible under the supervision of my professor, Etienne Sagbo. This success opened up many other opportunities for training in crystallography and X-ray techniques by experts at IUCr-UNESCO OpenLabs, schools and workshops. As a compliment on my thesis defense, Professor Cazalbou gave me a copy of Cristallographie Geométrique by Nadine Millot. This book was dedicated “to encourage me to become soon an expert crystallographer”. It was a blessing! 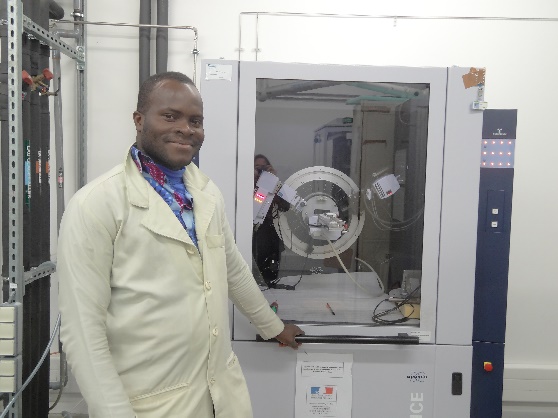 Sidoine Bonou as a PhD student with a powder X-ray diffractometer at CIRIMAT (Toulouse, France) in 2016.

A year later, with my work on the “Conversion of Achatina snail shell acclimatized in Benin to calcium phosphate for medical and engineering use”, partly carried out with Professor Cazalbou at CIRIMAT, I had the great pleasure of receiving the Best Poster Award at the Second Pan African Conference on Crystallography (PCCr2) in Accra, Ghana, in 2019. It was the first time I had received a prize at an international meeting with eminent crystallographers coming from all over the world. And to add to the occasion, I received the award from the hands of the IUCr Executive Outreach Officer, Michele Zema, who would go on to play a crucial role in the continuation of my adventure in crystallography. The prize consisted of the IUCr book A Little Dictionary of Crystallography, edited by A. Authier and G. Chapuis. Upon my request, Professor Zema dedicated this book to me, writing “To my friend Sidoine, wishing you a great career in crystallography”. 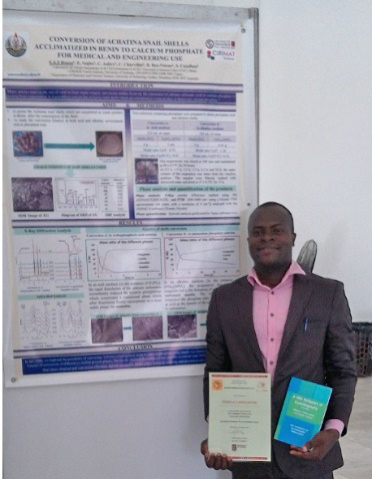 Sidoine Bonou with his prize for the Best Poster at PCCr2 (Accra, Ghana) in 2019.

At this stage, in my country, the Republic of Benin, great reflections had started and moved in the direction that the scientific future of Benin and all of Africa would be "crystalline" very soon! This is when LAAAMP (Lightsources for Africa, the Americas, Asia, Middle East and the Pacific), founded and coordinated at that time by Sekazi Mtingwa, Michele Zema and Sandro Scandolo (note Marielle Agbahoungbata and Özgül Öztürk were appointed as members of the LAAAMP Executive Committee at a later stage), comes into the picture. In fact, following the invitation of LAAAMP, Thierry d’Almeida from CEA (France) visited Benin - his home country - and managed to convince the President and his Cabinet to fund the implementation of a crystallography and tomography facility as part of the Sèmè City innovation center, which became known as X-TechLab. Professor d’Almeida saw in me the character of a young and engaged scientist who was very willing to learn and go further, and wanted me in his working group. I joined the X-TechLab team on the occasion of the organization of the first training sessions in X-ray crystallography, tomography and mathematical engineering, held in Cotonou in May and November 2019, within the framework of the Seme-City–IUCr-UNESCO–LAAAMP OpenLab. The sessions proved very successful and included contributions from eminent professors of international renown.

However, there was a crucial need for me to complete my training in crystallography before taking on the role of Research Coordinator at the X-TechLab, and from 29 August to 11 October 2019, I had the unique opportunity to travel across Italy for various training activities.

I was first in Naples, from 29 August to 4 September, where I attended the AIC International Crystallography School “Crystallographic Information Fiesta”, organized by Serena Tarantino, Brian McMahon and Michele Zema. This was such a fantastic experience, from both a scientific and a personal point of view. I had the opportunity to meet renowned lecturers and young researchers from around the globe, fundamental to building my network of contacts in the field. On the occasion of this workshop, the participants produced two articles, one on solving twinned structures and the other a macromolecular structure, which were subsequently published in IUCr Journals. My participation was supported by an IUCr Young Scientist Award, which was highly appreciated as it fully covered my accommodation and subsistence costs. 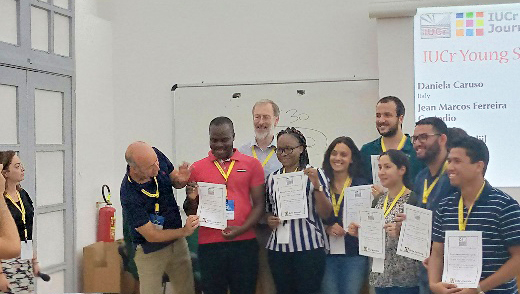 With my great enjoyment and increased self-confidence, I learned that my application for an IUCr Young Scientist Award to attend the EXPO&more Workshop in Bari from 30 September to 3 October had also proved successful. Therefore, I had a three-week gap to fill between the end of the CIFiesta School in Naples and the start of the EXPO&more Workshop in Bari. Professor Zema suggested that I should spend this period in a crystallography lab in Bari, and introduced me to his friends and colleagues Gennaro Ventruti and Emanuela Schingaro, who quickly arranged to have me in their lab for an immersion internship. I learned a lot under their supervision and with the support and availability of their whole team. The training covered several topics, including selection, mounting and centering of single crystals, and data-collection strategies at ambient and high temperatures with a single-crystal diffractometer. Additionally, I received training in the maintenance of detector cooling devices and the programming of data collection on a powder diffractometer.  In summary this internship allowed me to learn a bit of everything about powder and single-crystal diffractometers. These skills acquired during such a short period of three weeks deserved to be supplemented by other training.

The EXPO&more Workshop was also very enjoyable and useful as it offered a deep exposure to specific techniques and methods for X-ray powder diffraction. 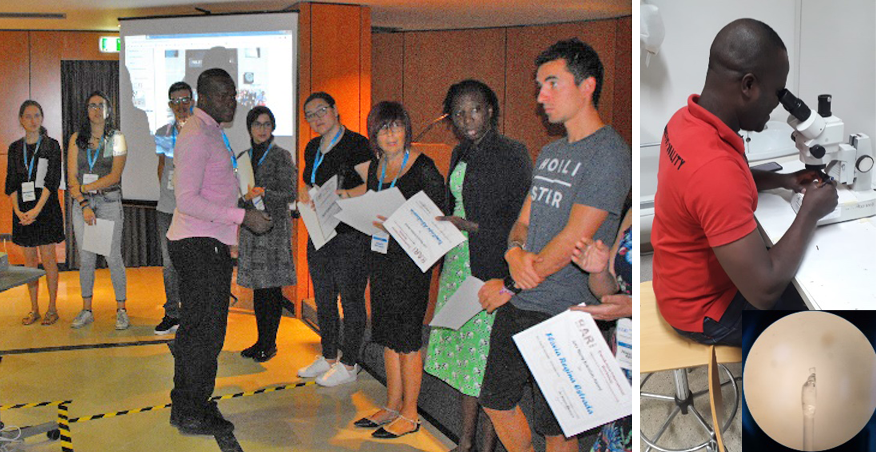 Like in a scientific adventure where you do not always know where the thirst for knowledge leads, I got the tremendous opportunity forwarded by Professor Mtingwa (LAAAMP) to apply for training on the XRD, XRF and XAS beamlines at the Elettra synchrotron in Trieste. So, very soon, it was already time to travel again and move from Bari to the north of Italy. Next stop was Trieste to attend the workshop “Instrumentation for Synchrotron Radiation Experiments” from 7 to 11 October, organized and funded by the International Atomic Energy Agency (IAEA).

I was very elated to interact with eminent scientists at this workshop, which was focused on the preparation, drafting and submission of a proposal for feasible experiments at a synchrotron and a visit to the facilities. Here too, I had very good trainers who impressed me with their teaching methods on X-ray techniques.

In addition to the background acquired in using powder and single-crystal diffractometers in the laboratories of the University of Bari, and to all the theory and practical sessions offered by the workshops in Naples and Bari, this training in advanced light sources at Elettra covered another important aspect, as it focused on the drafting of competitive proposals for an implementation on a synchrotron. Significantly, it was the first time a member of the young team of X-TechLab, i.e. I myself, had visited a synchrotron!

My travel experience in Italy for training in crystallography was wonderful because of the succession of opportunities. My commitment is now irreversible! 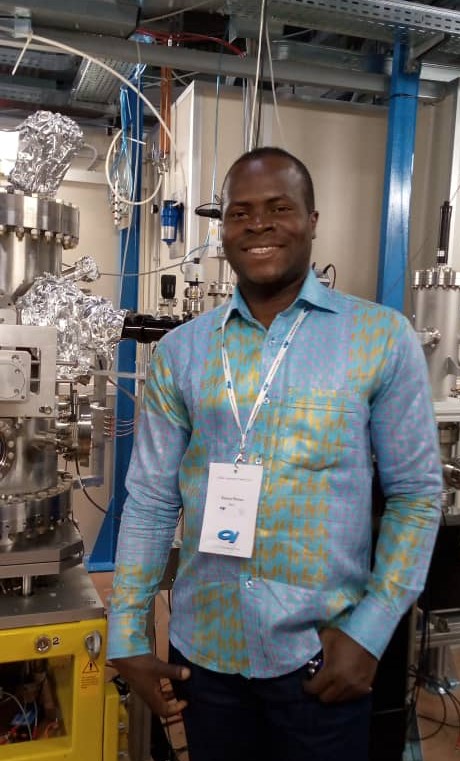 Sidoine Bonou at the XRF beamline at Elettra (Trieste, Italy), very excited to be on his first visit to a synchrotron.

My special thanks go to Audrey Tourette, Sophie Cazalbou, Cedric Charvillat and Etienne Sagbo for my thesis works; to Claude Borna, Head of Agence de Developpement de Sèmè City, to Thierry d'Almeida and Marielle Agbahoungbata, the X-TechLab Project Leader and Coordinator, respectively, and to Michele Zema (IUCr Executive Outreach Officer, Chair of the LAAAMP Executive Committee and Chair of the X-TechLab Scientific Committee) for his unwavering support and dynamism. My warm thanks also go to Sekazi Mtingwa (LAAAMP), who strongly supports and shares all opportunities to train young scientists at advanced light sources; Peter Ian Swainson (IAEA) and Hervé Djokpe (Benin Delegate at IAEA); Gennaro Ventruti, Emanuela Schingaro, Ernesto Mesto and Maria Lacalamita (University of Bari) and Anna Moliterni (CNR, Italy) for their fantastic hospitality during my stay in Bari; Serena Tarantino (University of Pavia and CIFiesta School, Naples); Angela Altomare (EXPO&more Workshop) and her team; Alessandro Migliori (XRF beamline), Guiliana Aquilanti (XAS beamline) and Jasper Plaiser (XRD beamline) at Elettra Sincrotrone Trieste; and all supervisors who contributed to my training during this special travel period.