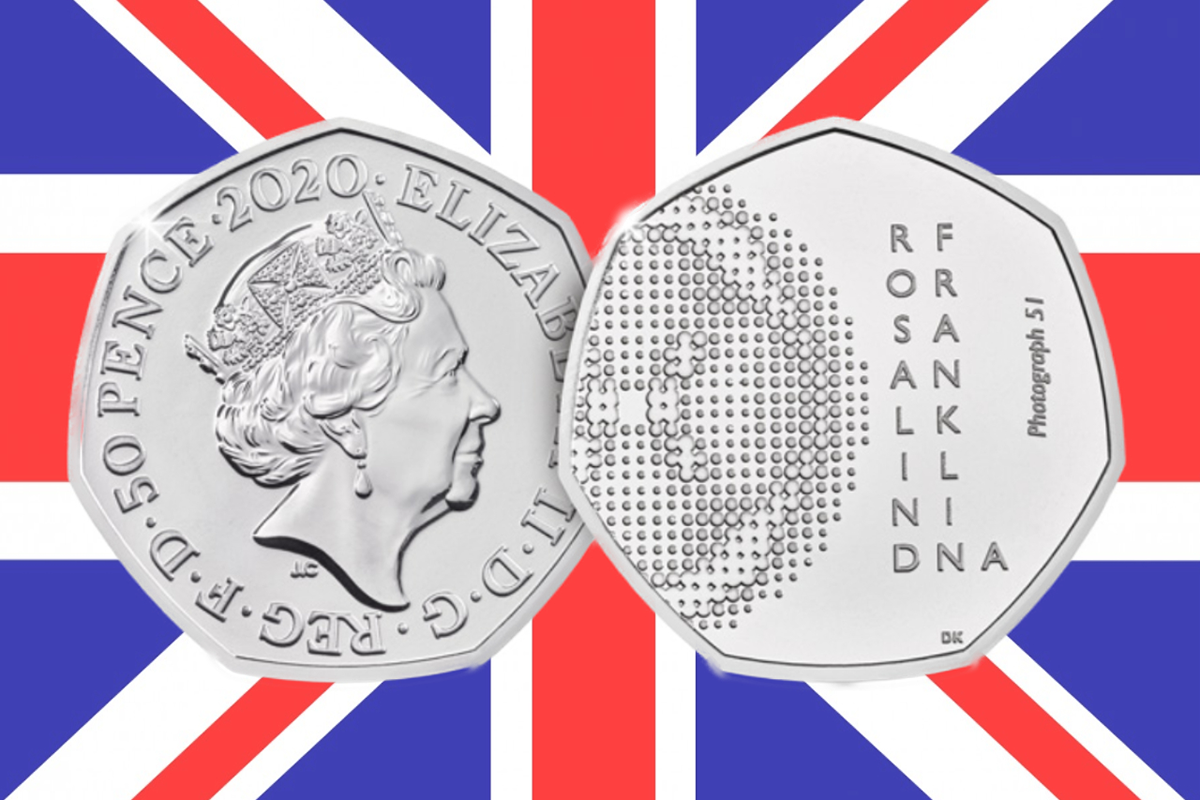 Recently, the Royal Mint in the UK produced a splendid 50 pence coin in honour of Dr Rosalind Franklin and her famous Photograph 51 of DNA. As a result, there was a lot of discussion in the Twittersphere about this coin. Initially, some of us, including myself (!), thought that this looked more like a modern X-ray rotation diffraction image typically from a protein crystal i.e. with its high density of spots. Surely we would expect to see the X-shaped diffraction pattern typical from a fibre. However, we were, in fact, misled by this regular pattern of spots in the image. Basically we knew too much diffraction! If you look carefully, and most significantly if the coin is tilted, one can then make out more obviously the original image with its dark cross typical of a helical structure – clever!

So, I recently ordered a gift pack from the Royal Mint and received a nice little booklet together with the coin. Here, I read that the designer was David Knapton, a member of the Royal Mint's graphic design team. In his own words: "A straight representation of Photograph 51 wouldn't have worked on a coin, so I decided to reflect the printing techniques of the era. To restore Franklin's rightful role, it was important to include her name. Adding an A to a third column to line up with the last letters of Rosalind and Franklin to spell DNA felt like a small "penny drop" moment. I can only imagine how Franklin felt when she made her breakthrough discovery."

"Printing techniques of the era" refers to the pointillist style for newspapers, even today, and not to forget the paintings of the pointillists such as Seurat. The accompanying booklet from the Royal Mint gives a brief resume about Rosalind, mentioning that the photograph was taken by her student Mr Raymond Gosling at King's College, London, in May 1952. It also notes that Professor Maurice Wilkins, having shown the image to Dr James Watson, had provided the final clue that Watson and Crick needed to model the double helix structure of DNA, their second attempt, having been corrected by Rosalind in their first attempt (paraphrasing: "phosphates not on the inside, which would have repelled, but on the outside").

If you want to order a gift pack, you can do this from here.

You may be wondering why the 50 pence coin in the UK is seven-sided. I used to tell people that this meant that it was not possible to place these coins together on a table without leaving gaps, thus making it easier to pick up with fingers. However, while possibly being true, this is not the reason. I am continually learning new things. This particular shape can be shown mathematically to form an equilateral-curve heptagon, or Reuleaux polygon, a curve of constant width, meaning that the diameter is constant across any bisection. This allows the coin to be used in a vending or sorting machine without it being dropped in a particular orientation. And, oh yes, a bag of them is handy for crystallography tutorials to illustrate that you cannot completely tile a surface with them, as with regular pentagons.

It is worth noting that a remarkably similar photograph was obtained a year earlier by Elwyn Beighton working in Bill Astbury's laboratory in Leeds (UK) (see here) but whose significance was not appreciated by Astbury at the time. I recommend the book The Man in the Monkeynut Coat: William Astbury and the Forgotten Road to the Double-Helix by Kersten T. Hall for the full story.