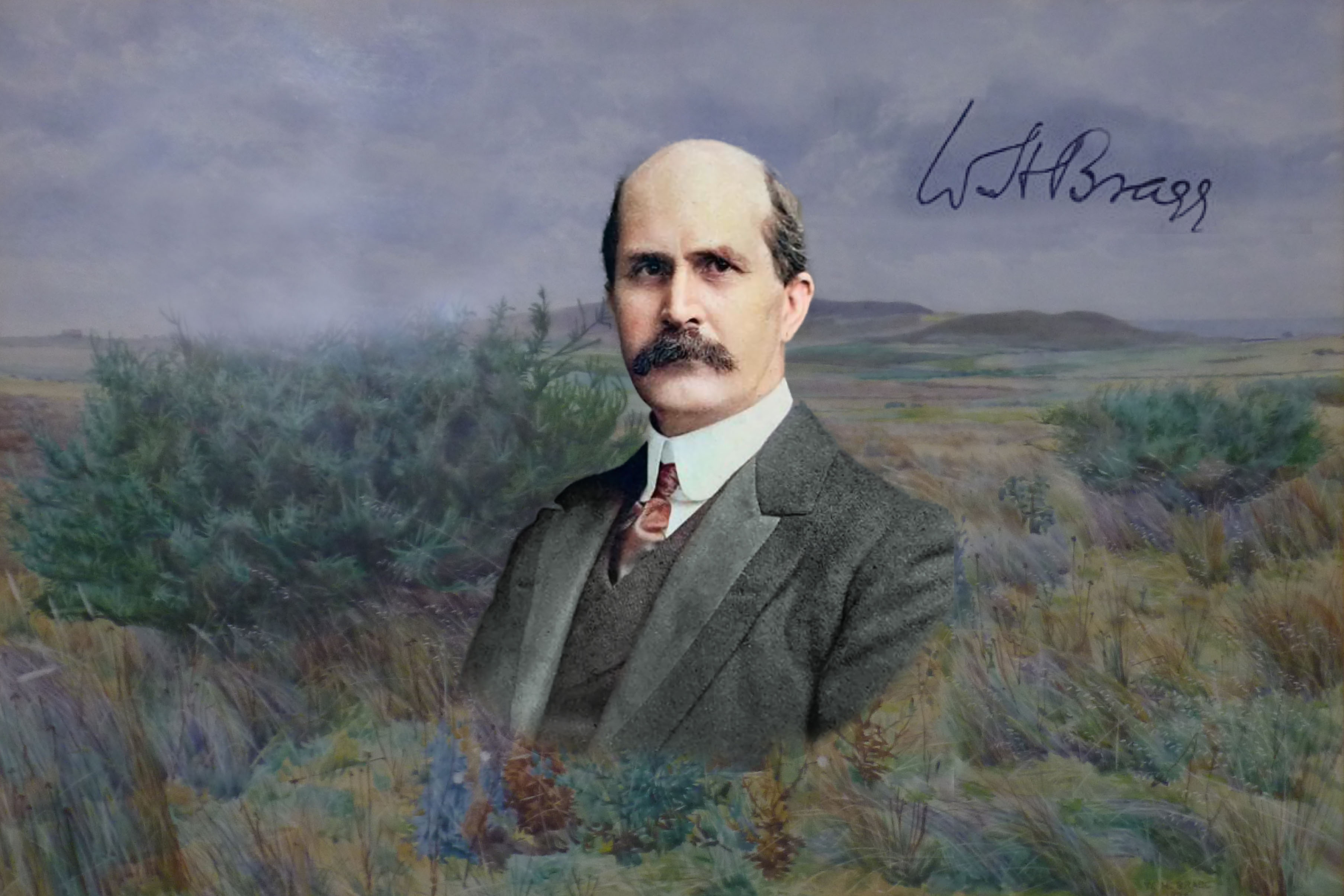 Sir William Henry Bragg, and his son William Lawrence, changed how we understand the world around us, all from a laboratory at the University of Leeds. A new exhibition, ‘Shaping the course of modern science: William Henry Bragg and his legacy at the University of Leeds’, uses material from the University’s Special Collections and key loans from the Bragg family and the Royal Institution to reveal the story of Bragg’s Nobel Prize-winning work, and his continued legacy. The exhibition opened on 26 October 2021 and will run until 5 March 2022, coinciding with the opening of the new Sir William Henry Bragg building and as part of the Bragg Cultural Programme. 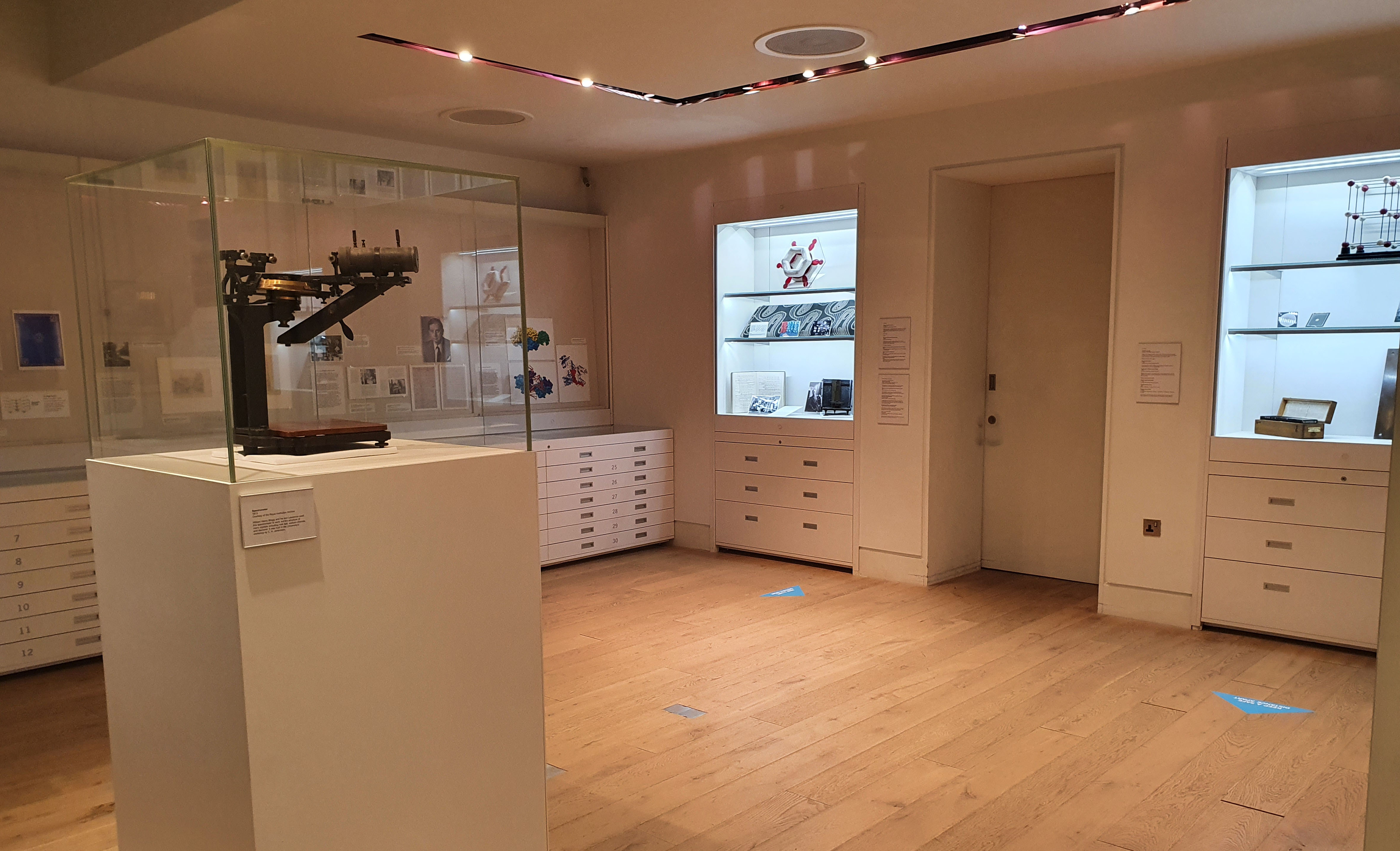 Sir William Henry Bragg joined the University of Leeds in 1909 as Cavendish Professor of Physics. In Leeds, he undertook pioneering research on X-rays and crystals with his son Lawrence. They became the first, and so far only, father and son duo to be awarded the joint Nobel Prize for Physics in 1915. The prize was awarded for their work at Leeds, developing the techniques of X-ray crystallography which allowed scientists to deduce the position of atoms within crystals using Bragg’s equation, nλ=2dsinθ, first found by Lawrence Bragg.

Some of the items displayed as part of the exhibition include the original notebooks used by William Henry and Lawrence Bragg to record the results of their 1913 experiments, containing the handwritten discoveries which led to the Bragg equation. Bragg’s original spectrometer, on loan from the Royal Institution, is also on display. This special piece of equipment was built in a University of Leeds workshop by C. H. Jenkinson, and helped the father and son team to work out the structure of many crystals, including sodium chloride and diamond. These items are displayed for the first time alongside William Henry’s Nobel Prize medal, kindly loaned by the Bragg family.

The guest curator, Dr Stella Butler, comments that “William Henry Bragg and his son Lawrence formed a fantastic scientific partnership. The father brought amazing experimental skill, the son theoretical genius. Together they provided the springboard for scientific discoveries that would eventually reveal the secrets of nature.”

Alongside highlighting William Bragg’s work at Leeds, the exhibition also delves into his legacy that still lives on today. William Astbury, Bragg’s student and protégé, joined the University of Leeds in 1929, pioneering the investigation of large biological molecules. His laboratory became one of the UK’s most important centres for crystallography and his camera, used to produce the first X-ray diffraction studies of wool, is displayed in the exhibition. It was at this centre in Leeds where Astbury’s research student Florence Bell wrote the thesis which contained one of the first X-ray photographs of DNA, the carrier of genetic information. Bell’s original thesis is also on display.

The exhibition highlights another of William Bragg’s protégés, Dame Kathleen Lonsdale. Her crystallographic work at the University of Leeds between 1927 and 1930 established that the benzene ring of six carbon atoms was a flat structure, with the six atoms sharing their outermost electrons as a ‘cloud’. A model of benzene is on display alongside a copy of Lonsdale’s Structure Factor Tables, both loaned from the Royal Institution, the latter being important in simplifying the complex and lengthy calculations involved in the determination of crystal structures. Lonsdale was awarded an honorary degree by the University of Leeds in 1967, and the exhibition also includes letters and photographs relating to this happy occasion. Crystallography also caught the zeitgeist of post-war Britain, with crystal structures inspiring designs at the Festival of Britain in 1951. Helen Megaw, a student of J. D. Bernal, himself a student of William Bragg, was responsible for suggesting crystallographic designs for the Festival. An example of one of the fabrics is shown alongside Lonsdale’s work in the exhibition, loaned by Mike Glazer, Emeritus Professor of Physics at the University of Oxford. 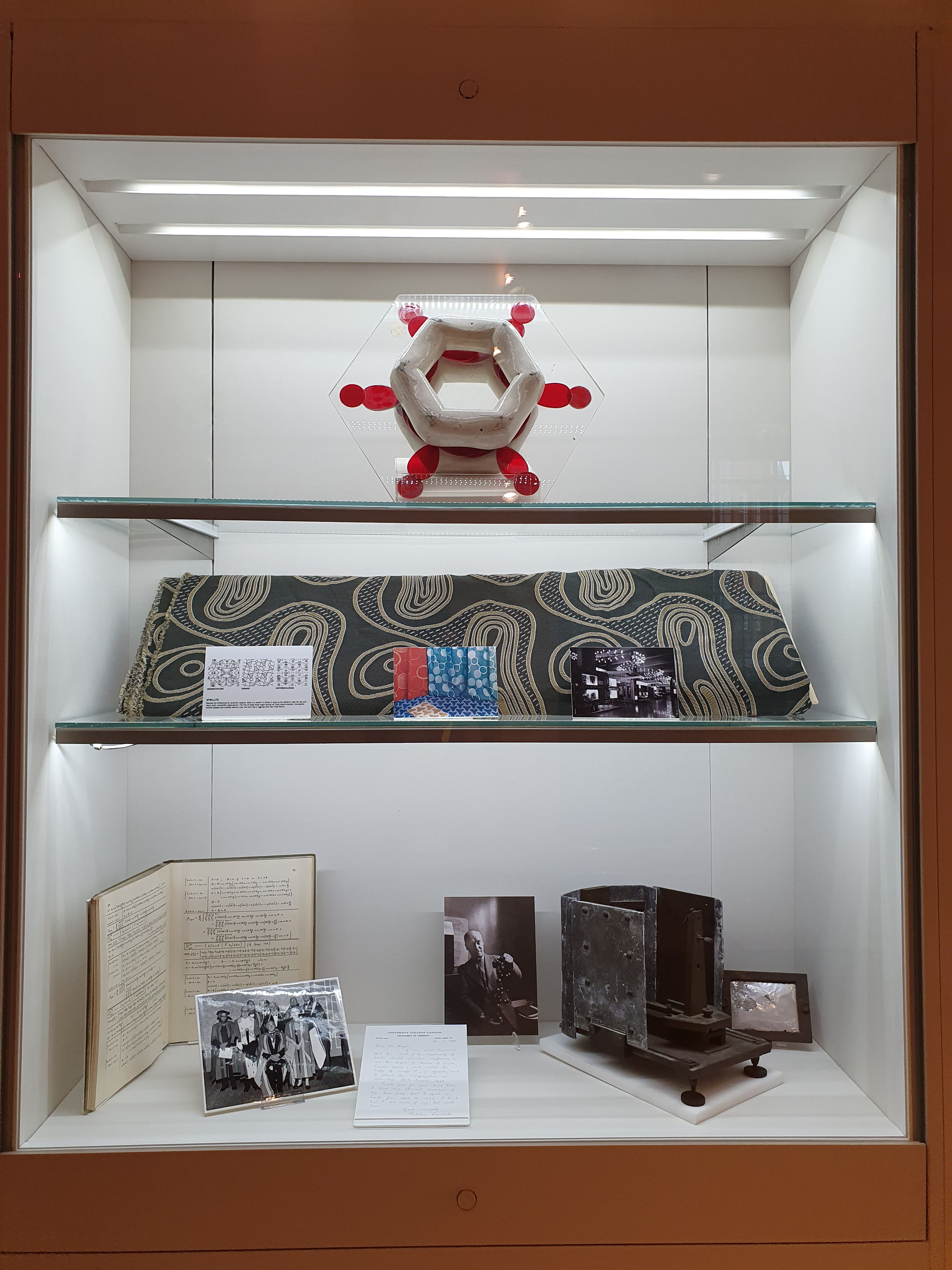 In the 1950s, Gordon Cox and Durward Cruickshank introduced new computational methods to the University’s crystallographic research, prompting the purchase of Leeds’ first computer, a Ferranti Pegasus. It was now possible to work on much larger molecules, and in the 1980s, Simon Phillips, working at Leeds, was part of the international team which produced the first computer-generated 3D images of an antigen–antibody complex. The methods pioneered by the Braggs remained central even as computers ‘took over’ the calculations. Images in the exhibition have been provided by Professor Simon Phillips, the first Director of the Leeds-based Astbury Centre for Structural Molecular Biology established in 1999.

Finally, whilst X-ray crystallography is William Henry’s most famous achievement, he is also remembered as a strong believer in the power of science and scientific education to do good in society and continued to champion this vigorously throughout his life. He was particularly known for his ability to explain complex scientific ideas to lay audiences, notably in his Royal Institution Lectures, and was seen as one of the main scientific voices in the interwar era. To his family, he was unassuming and modest, a much-loved father and grandfather who loved to paint and play sports, particularly lacrosse, golf and tennis. The Bragg family have kindly loaned rare family photographs, a selection of William’s pencil sketches and one of his watercolour paintings in order to illustrate the man behind the science. 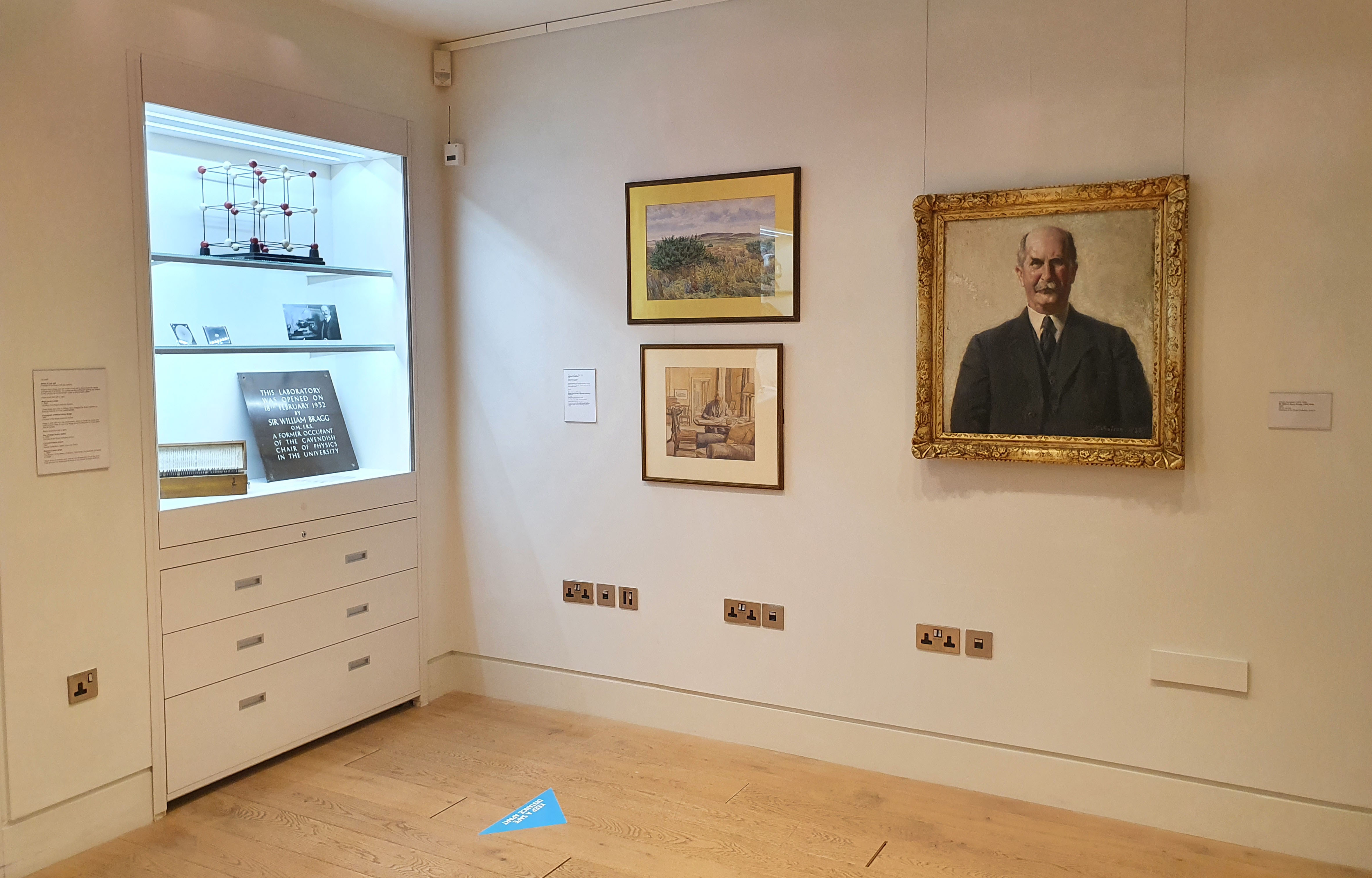 The crystallographic methods pioneered by William Henry Bragg and his son Lawrence have formed an important platform for research for over a century, ultimately contributing to uncovering the secrets of life itself. The molecular structures that have been determined using X-ray crystallography have led to life-changing treatments and vaccines, such as the COVID-19 vaccine, impacting the lives of everyone across the world. This new exhibition honours all of the different facets of William Bragg’s life and legacy.