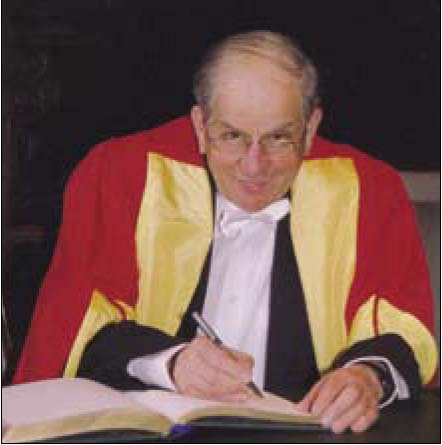 John Helliwell and Bob Munn (Manchester U.) organized a mini-symposium to celebrate life and achievements of Durward W. J. Cruickshank (1924-2007) in Manchester, November 2007. Among the 100 or so participants was Farid Ahmed (Ottawa), DWJC's first research student at Leeds U. and co-author of papers in 1952 and 2007. Farid commented touchingly on Cruickshank's faith, recognized by a hymn and prayer opening the meeting.

While Cruickshank is most widely appreciated in the area of determination, refinement and precision of molecular structures, the breadth of his scientific achievements embraced quantum chemistry, inorganic oxyanion bonding, gas-phase electron diffraction, anisotropic thermal vibrations, aromaticity, Laue diffraction and proteins, not to mention history and biography. The remarkably high average of citations per publication was noted. Alajos Kalman (Budapest U.) expanded the theme of tetrahedral oxyanions, while another onetime post-doctoral collaborator from 1970, Guiseppe Filippini (ISTM-CNR and Milan U.), made some philosophical observations and was a reminder of Cruickshank's continuing interest in hydrocarbons, reflected more fully in the publications in the J. Mol. Structure special issue (130, 1-191, 1985).

Keith Moffat (Chicago U.) spoke of his collaboration with himself and Helliwell at Daresbury and York U. (1985) with a 1909 (pre-X-ray-diffraction) reference to crystallography of haemoproteins. Laue photography, largely discarded after painstaking use by Pauling and Wyckoff in the 1920s, was revived by the availability of intense polychromatic radiation in the 1980s. Intensive work and spirited discussion among the trio led to the solution of the problem of overlapping orders and to the exploitation of short exposure times in the study of proteins and viruses. Louise Johnson (Biophysics, Oxford U.) described Cruickshank's contribution to enzymology through difference maps and time-resolved studies based on the Laue technique. Garib Murshadov (York U. and CCP 4) spoke about REFMAC for protein refinement, the Cruickshank dispersion precision indicator and the contemporary impact of early Cruickshank papers.
Glasgow's recognition of Cruickshank was illustrated by Chick Wilson (Glasgow U.), while Bob Gould (BCA) and Mike Dacombe (IUCr) recalled his contributions respectively to the British Crystallographic Assn and to the IUCr.

The most moving presentation was the voice of Cruickshank recorded, only days before his death, in an interview by Martyn Clark (Leeds Computer Society). Apparently Kathleen Lonsdale's public lectures on reciprocal space proved tough for a young engineering graduate working at Naval Intelligence in London. However, having to do engineering at Loughborough during WWII, instead of mathematics at Cambridge, proved a blessing. Cruickshank's appointment in 1946 as assistant to Gordon Cox at Leeds U.was initially to utilise redundant military X-ray equipment to improvise devices to aid structure-factor calculation and Fourier synthesis. Thanks to George Jeffrey, DWJC saw papers on the wartime research of Andrew Booth (who had worked for Cox and later went to Canada). These (summarised in Fourier Technique in X-ray Organic Structure Analysis, Cambridge U. P., 1948) described novel approaches to refinement by sections and differential syntheses, finite-series corrections, and accuracy estimates, developments of which led to an Acta note in 1948, a paper in 1949 and the DWJC series in the 1950s. Use of Beevers-Lipson strips and punched cards at Leeds gave place to five years of weekly overnight runs with Ahmed and Diana Pilling on the Manchester U. electronic computer and ultimately to the successful bid for installation of the Ferranti Pegasus computer at Leeds in 1958.

Many of Cruickshank's family attended the meeting, which was formally opened and closed by his son John Cruickshank. Though there was no contribution on golf, Durward's other serious non-science pursuits of genealogy and extreme travelling were outlined by his daughter Helen Stuckey. DWJC's parents were medical doctors who met in London. His extensive searches (including visits to Salt Lake City, USA) on the maternal side showed that the family came from villages in the district close to Manchester where DWJC spent his later life. They also revealed ancestral links with the poet William Wordsworth (b 1770) and a Yorkshire mathematician and school benefactor, John Hymers (b 1803). Cruickshank made several cruises to the Arctic (close to the course near Baffin Island of a Yorkshire whaling skipper forebear) and the Antarctic (crystallographic names encountered in Crystal Sound are given in IUCr Newsletter 8 [3] 25, 2000).

The symposium formed a fine farewell to a courteous, friendly and genuine scientist who for 60 years worked to make substantial advances across a wide range of crystallographic science.